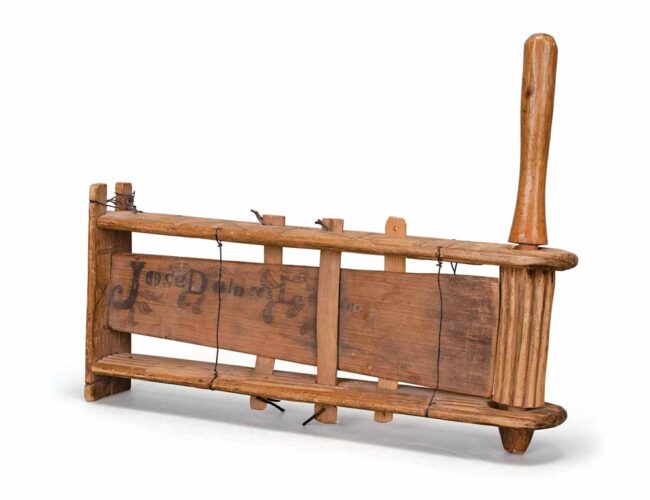 While copy editing this issue of El Palacio this summer, I was struck by the number of stories of reclamation included therein. New Mexico’s history is fraught with both fact and fiction, oftentimes nearly indistinguishable from one another, and this issue of El Pal serves to drive home the true (or at least the truer) version of so many tales we’ve heard differently again and again.

How many stories have we heard of women living with their female “friend” for years, or leaving their husbands to adventure and cohabit with a platonic girlfriend for decades? Platonic. Sure. Reclaim that narrative, queer folk of history! The storied past of Los Luceros gains another narrative this issue, a profile of a place not only as a refuge for outsiders to come “find themselves,” but as a place that was a salve for broken hearts. Reclaiming the larger narrative of New Mexico’s queer history, particularly that of people of color, is explored as well, with Alicia Inez Guzmán summing it up perfectly: “We are constantly rethinking and remaking the past and how we can talk about it.” This ethos carries through this entire issue of El Pal.

The taking back of the Pueblo pottery narrative from the legend of Edgar Lee Hewett, for example, struck me most significantly. I appreciate Bruce Bernstein, Erik Fender, and Russell Sanchez’s investigation of and challenge to the idea perpetuated for a century that Hewett was the only godfather to be credited for the revitalization of Native arts in northern New Mexico. Further, the curation of San Ildefonso Pottery 1600-1930: Voices of the Clay by people from San Ildefonso is a novel concept, but of course shouldn’t be; I hope it serves as a reclamation of museum space for Indigenous artists, a space that has forever been Anglo-dictated and -dominated.

The romantic story of conquistadors carrying giant iron church bells from the Old World to New Spain sure is an enticing one…but as Michelle Gallagher Roberts shows, it just isn’t true. However, while that at first sounds like it would be a bummer of a story, the narration with which Roberts traces and picks apart the bells’ lineage and provenance makes for a tale just as fun to read as any fiction—and to be honest, decoding the mythology around historical items in New Mexico could be just as fun as believing the myths in the first place.

A clear look at the origins of designer Alexander Girard’s designs sees writer Dave Herndon pointing out Girard’s at best borrowing of, at worst appropriation of, folk art from around the world; not a reclamation by those cultures of the ideas and images adapted to fit into mod American offices, but at least a nod toward the place where these designs originated. And who’d have thought that an old cigar-box guitar by a now-anonymous musician from decades ago would one day end up in a museum? History reclaims the remarkable accomplishments of those whose names are lost to time in Música Buena at the Museum of International Folk Art.

One step back from reclamation, too, is the idea of claiming; of a new bond. The Naming Ceremony is a beautiful little narration about the offering of a name to a baby; both of the baby claiming her name for her own, and of the universe claiming the baby as its newest resident. Welcome to the world.

And then, that leaves me. Not unlike the baby, I’m kind of new here. I copy edited this issue of the magazine, as I have done since March 2018—but starting with the winter issue, I will be its editor, following my predecessor Candace to lead a publication that I hope will only grow and evolve under my leadership. I want to tell more stories of reclamation; I want to elevate the truth, or at least the truer.

I claim my post as editor, and I hope to do it justice.