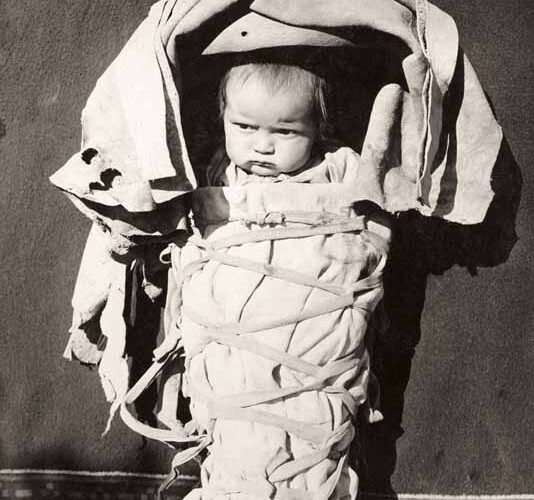 Through the thin layer of darkness that slowly moved away from the coming morning, I could see the silhouettes of the sisters as they walked down the narrow dirt road and toward our house. Starlight lingered in all directions, sparkling above the stillness of frost-covered trees as I held the child close on this fourth day of her life. The stream swimming down from deep within the canyon, to the south, rushed over smooth stones and past tall reeds toward its waiting river: the day’s first song pushing through the last moments of night.

The sisters wore white mantas embroidered with black and red borders, shawls made from finely woven wool with fringe that moved in circular motions as they walked, and white buckskin moccasins whose black soles curved upward, toward the sky, at the tips. Tiny clouds of fine snow spun into the dawn with each meeting of moccasin to Earth, catching the new light for a moment then settling back into the wintry ground beneath the next step.

Entering our home near the west end of the village, where irises bloom and small red plum trees grow, where buffalo and deer dancers have stepped many times, the sisters moved quietly over the hard mud floor under our feet and under the long, thick vigas over our heads. Each sister carried a small hide-wrapped bundle containing objects for the naming ceremony. They placed the bundles on the floor in the center of the large, empty room and prayed over them in Tewa. They asked the Creator to bless all that was contained within and all who were present. They asked for blessings for our village, Kha Po’o Owingeh: Village of Singing Water. The sound of their voices and the soft unfolding of the hide hid behind the edges of morning and floated through the cedar-warmed room.

The contents of the bundles were ready for the ceremony when the last words of the prayer were spoken. Among the sacred objects were several woven blankets; a wing of eagle feathers; a shallow gray bowl painted inside and out with lightning and rain symbols; blue cornmeal wrapped in its own husk; a small white shell from a lake to the north; and water from a spring near the sisters’ home in the center of the village, which they collected in a dry, hollowed-out gourd. They poured the spring water into the bowl and sprinkled the cornmeal into the water. Some of the pieces floated on the water’s surface, touching against the lightning and rain symbols for a moment before moving in toward the center then spiraling down to settle on the bottom of the bowl.

Gently taking the child from my hold, the sisters wrapped her in the blankets and placed her on the thick, smoke-scented hides. Together they carried her beyond the early shadows and deeper into the morning. Moving through a grove of aspen trees growing just above the cornfields near the river, where tiny brown frogs and bright green dragonflies live in springtime, they heard bird songs and the sound of water spilling away from them and back toward the village. Reaching an open clearing beyond the aspens, the sisters rested beside a young blue spruce tree. Turning toward the east to face the mountains, where katsinas live and morning glories vine over the edges of cold granite cliffs, they prayed again. Again, they spoke in the ancient words. Again, they asked the Creator for blessings. Again, they sprinkled cornmeal around the base of the tree.

Holding the child up into the dawn, which spilled quickly over tall winter peaks and cast shadows onto the hard, damp ground and onto the child’s delicate face, they spoke to each other and to the child in Tewa. Some of the words were very old and were spoken and understood by only a few people from our village. Some of the words were from the time before the Tewa people came to this place from the place of emergence, north of here, traveling down mountains and mesas and across broad, flat, grass-covered prairies, through deep rivers and shallow streams and over watery marshes thick with cattails, around shell-filled lakes and past damp, mossy caves and under juniper trees thick with berries and above winding canyons, beyond snow-filled forests and into the cool, thin air of the high desert.

As one sister cradled the child in her arms, the other dipped the shell gently into the bowl, filling it with the sacred water, then held it to the child’s mouth: Four times she drank from the shell. The sisters continued to pray and offered cornmeal in each direction as they began their giving of names. They said their words aloud and offered thanks to the things that are most sacred to the Tewa people. They offered thanks to the sun and moon; to oceans and prairies; to obsidian-covered hills and falling stars and planets not yet known; to hummingbirds and red-tailed hawks; to mountain lions and dragonflies; to corn and clay and echo-filled canyons; to places where snow falls; to hillside flowers and icy edges of quick-flowing rivers; to white geese and blue rain; to trout-filled streams and lightning.

Brushing the eagle feathers across the child’s forehead and over her warm, blanket-wrapped body, the sisters spoke the first name. Agoyo T’se: Yellow Star. As the child drank from the shell again, her face now completely enveloped in the shadows of the changing light, they gave the second name. Oga Po’o Kweeng: Shell-filled Lake. These names were given to mark the child’s birthplace in the physical world, and to connect her to the Tewa people.

The sisters shared the water that remained in the bowl. As they lifted it to drink, pieces of cornmeal floated up to the surface and touched against the lightning and rain symbols again. When the bowl was empty, they offered another sprinkling of cornmeal around the base of the naming tree. Moving back through the clearing and down into the grove of aspens, they followed the now longer shadows along the stream’s narrow bank back to the place where tiny brown frogs and dragonflies live in springtime and back to our home.

Returning to the center of the large room, the sisters prayed in the same quiet voices as before; still holding the child, they repeated the names they had given her under the tree in the clearing beyond the aspen grove. Holding the child close again, I breathed in the essence of the prayers that still surrounded her. And I could see the silhouettes of the sisters as they walked down the narrow dirt road and away from our house, the tips of their moccasins pointing upward, toward the sky.

RoseMary Diaz is a freelance writer based in Santa Fe. She spent much of her childhood in Santa Clara Pueblo, this story’s setting.