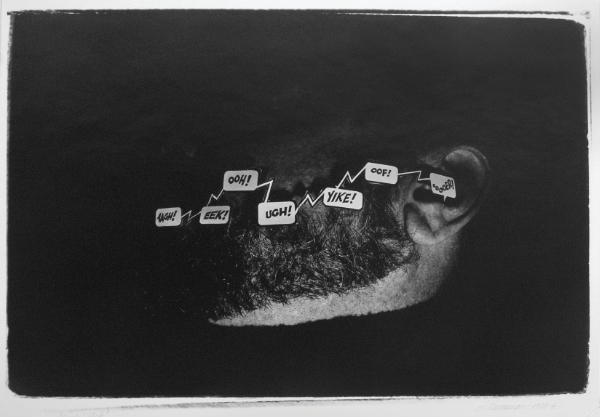 The notion that our left brain determines analytic deduction while the right brain fosters emotional perception remains useful as a metaphor if not as a neurological reality. In that model, the right brain would assess the feelings aroused by a vermillion octagon overlaid with white runes, while the left brain would instead recognize a stop sign. When text and image are combined in a single work of art, these adversarial modes of thinking collide in the intersection, and never the same way twice.

Word Play, a freewheeling exhibition at the New Mexico Museum of Art, offers examples of the limitless ways pictures and words can cooperate to make a singular expression. Artworks using text-based images vary as much by intention as they do by material, and the exhibition surveys a range of works, from the earnest photography of homespun signboards such as Roadside Stand Near Birmingham, Alabama (1936) by Walker Evans, to the scathingly ironic subversions found in the series Paper Doll for a Post-Columbian World (1991) by Jaune Quick-To-See Smith. That series features the paper doll “Barbie Plenty Horses” and her collection of “fun” outfits to wear, like “Maid’s Uniform.”

For curator Katherine Ware, such a variety of styles presented a rare opportunity to juxtapose wildly divergent tones and textures within a unified show. To that end, the works are grouped into categories more suggestive than canonical. Ware has opted to let the pieces speak for themselves, rather than impose interpretations upon the exhibit.

“I’m leaving a lot to the visitor,” Ware says, “and I’m making these loose categories and arranging things in a way that I think is interesting. … The categories are just informed by the work. It’s a show for people to bring things to, rather than me to be didactic about.”

These loose associations gather in categories such as “Speech Bubbles,” which playfully commandeers comic book exposition; for example, Eek Ugh (1980) by Joyce Neimanas, who is known for her unorthodox approach to photography. By contrast, Bruce Nauman’s print Live or Die (1985) represents the nakedly philosophical, aphoristic compositions in the group “Words to Live By.” Don’t expect much practical advice here, but perhaps a quiet moment contemplating a photograph of graffiti which reads “No sense makes sense,” from Santa Fe’s esteemed photo historian and curator Van Deren Coke.

“Free Speech” contains polemical works, speaking truth to power by welding defiant illustrations to agitprop maxims, such as We Are the Slaves of Slaves: Lucy Parsons (1980) by activist and artist May Stevens. That piece foregrounds an appropriated image of the radical labor organizer Lucy Parsons over handwritten text from one of her incendiary speeches.

By contrast, everything in “Mother Tongue” treats words as an ingredient for the collage. Though the words have didactic weight, they become letterforms, reduced to their aesthetic effect. No meaning, just shapes—the medium is the message in works like Lesley Dill’s Woman with a Hindi Healing Dress (2005).

Other pieces in “Mother Tongue” assert identity through language, reclaiming moral high ground in our ongoing personal-is-political discourse. Santa Fe-born artist David-Alexander Hubbard Sloan’s Tsísnátbáhí (Honey Bee), from 2013, prints drawings of bees and the word for them in the artist’s native Diné onto a grocery store flyer. The contrast between the eminent imagery and the prosaic advertisement is as pointed as the difference between a bee’s honey and its sting.

The selections for the section “Mixed Messages” includes enigmatic pieces like Crownet 173 Crying (1983) by Doris Cross, a page from the “C” section of the dictionary obscured by paint and ink, while “Missives” involves correspondence-based works such as Alex Traube’s poignant 1976 suite of “Letters to My Father.” Meanwhile, “And Now a Word from Our Sponsor” recontextualizes ads, street signs, and graffiti, divorcing intent from meaning. The appealing photograph This Year Ride A Bicycle by Ralph Steiner both documents the look of a 1920s urban landscape while also reflecting the incongruity that in this image, there is no place where a bike could be ridden.

These loose arrangements offer a jumping-off point, rather than a landing spot, for such divergent works. They encourage the visitor to regard each artwork on its own terms. The pieces within each category are associated, but only proximately, like strangers waiting for the same bus. The wide latitude of this approach permits Ware to dive deep into the museum’s collection, demonstrating the strategy through different eras. “It’s a show that cuts across the collection in a different way,” Ware says. “Such a wide-open topic allows us to pull out some really interesting work that hasn’t been shown in a while and to showcase some new acquisitions.”

This omnibus format means that the exhibit pivots from wry humor to pointed inquiry to brazen inscrutability. In the dialogue between text and image, who is commenting on whom? Visitors might be inspired to continue that conversation with their companions long after leaving, perhaps contemplating that old familiar ratio between pictures and words. For while pictures can instantaneously express a galaxy of ideas, some might argue that words (in their thousands) can communicate in higher definition. Meaning is always in the eye of the beholder, but never more so than when text and image compete for our trust.

Audiences have perhaps accepted the idea that a painting doesn’t have to depict anything; that a sculpture doesn’t have to explain anything. However, when words join the image, we expect meaning, and are driven to search for it. In Word Play, many of these works beguile such attempts at explication.

This clashing of left-brain expectations versus right-brain sensation is what kindled the curiosity of the curator, now in her twelfth year at the New Mexico Museum of Art. “We often think that written communication is clear, or it’s meant to be clear,” Ware says. “And works of art don’t really do that so much, and I think the words in these pieces on view don’t do that so much. So it really is a more cryptic exchange, rather than descriptive or narrative.”

Ed Ruscha is one of the better-known artists featured in the show, exemplifying this cryptic approach. Often word-based and resistant to explanation, his images have been a particular touchstone for Ware, leaving the viewer wondering which side of the joke they are on. Sin, from 1970, is idiomatic yet ambiguous, seemingly both cynical as well as transcendent. A three-dimensional rendering of the word “sin” stretches into the distance, while a cartoonish green olive incongruously floats in the foreground. It is pleasing to the eye, a riddle to the mind, and succeeds in planting a question mark in the heart of every viewer. An apparent lack of depth encourages an exploration of the liminal surface, its unresolved ripples. Juxtaposed above it on the gallery wall is William Christenberry’s landscape photograph taken in Alabama, punctuated with an oil sign that reads “PURE.”

Ruscha’s method reflects the irony-drenched cool of Pop Art and its plastic ethics (both with regards to artificiality and in pliancy). A response to an assumption of guilelessness by earlier generations, that eighties sarcasm has now been overtaken by our contemporary culture’s heartfelt vehemence. Methods of combining images and words seem to somehow reflect society’s pendulum swing between cynicism and genuineness.

Not surprisingly, an exhibition containing both playful and fervid expressions might find some pieces overwhelming others. The subjectivity of this response emphasizes the importance of each audience member’s perspective and preferences. Visitors will recognize themes echoing through the collection, changing pitch and amplitude as they go. The individual artworks often merge aesthetic pleasure with challenging concepts. Anger is leavened by wit, abstruse ideas are conveyed by concrete form. This one-two punch afforded by text-based imagery gives the exhibit an unexpectedly hopeful, open-ended plausibility.

Across these different techniques and objectives, the conflict of words and pictures can generate sparks, like steel on flint. For Ware, the friction of these encounters are entirely the point: “I’m interested in the complication of bringing those two communication media together. And I’m not necessarily interested in delineating all the ways that it makes something; I was just more interested in the collision. A picture may be worth a thousand words to somebody, but I’m more interested in the messiness.”

Visitors will need both their left and right brains to engage with this eclectic, multifarious survey. Word Play combines a dizzying array of colliding ideas. It is proof that, at the intersection of language and fine art, one must always look both ways.

Andrew Wice is a novelist and screenwriter. He is the author of seven novels, including To The Last Drop (Bäuu Press, Colorado, 2008) and the acclaimed Madrid Oral History Tour, a smartphone app which lets visitors hear Madrid, New Mexico’s stories, as told by the people who lived them. Visit AndrewWice.com.