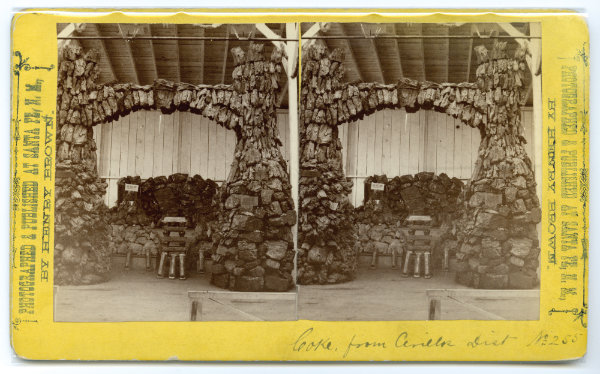 This photograph celebrates the abundance of the Cerrillos coal beds, located about twenty-five miles south of Santa Fe. The Atchison, Topeka and Santa Fe Railroad built a railroad depot in Cerrillos in 1892, and was responsible for creating the infrastructure to harvest the precious fuel. This included establishing what would eventually become the mining town of Madrid, building the railhead hamlet of Waldo, and laying a 3-mile railroad spur to connect the two. At the time, the nearby village of Los Cerrillos, named for its turquoise-laden “little hills,” boasted dozens of saloons and brothels, as well as a booming population to support them.

The deposits contained veins of both bituminous (soft) and anthracite (hard) coal, and in fact are the only locations west of the Mississippi for the preferred, cleaner-burning anthracite. Most of this hard coal was shipped out immediately on the AT&SF to California and Colorado. The soft coal, with its impurities, burned at a lower temperature and emitted voluminous, greasy smoke. It was made much more valuable by converting it into “coke,” which possesses metallurgic properties similar to hard coal. While soft coal was acceptable for heating homes or powering steam engines, the higher-burning temperatures of anthracite and coke were necessary for smelting steel.

It was in Waldo that the soft coal was turned into coke, by a distillation process appropriately named coking. Waldo itself was named for Waldo Henry Rogers, the former chief justice of New Mexico, a member of the notorious Santa Fe Ring which controlled the territory’s political, legal and business interests. Fifty beehive coking ovens melted out the impurities from the soft coal, leaving behind a porous rock which burned at a much higher temperature, similar to hard coal. Compared with soft coal, coke was not only more valuable as a fuel but also weighed less, and was thus easier to transport.

Despite being brittle, the lightness of low-density coke made it possible to stack it into an elaborate freestanding arch display, as seen in this photograph. Such an array of high-quality coke would have convinced attendees to the Tertio-Millennial Exposition of New Mexico’s bountiful mineral commodities. It also might have highlighted the savvy of the AT&SF. The corporation’s vertical monopoly controlled the excavation, distillation, transport, and sale of this coal. Yet perhaps this enthusiastic exhibit was disingenuous, for the AT&SF sold its interests in the coal beds in 1896. While the beehive-type coke ovens soon proved obsolete and Waldo disappeared into ruins, Madrid successfully mined coal for another sixty years, even supplying the fuel which powered the Manhattan Project in Los Alamos.
—

Andrew Wice is a novelist and screenwriter. He is the author of seven novels, including To The Last Drop (Bäuu Press, Colorado, 2008) and the acclaimed Madrid Oral History Tour, a smartphone app which lets visitors hear Madrid, New Mexico’s stories, as told by the people who lived them. Visit AndrewWice.com.