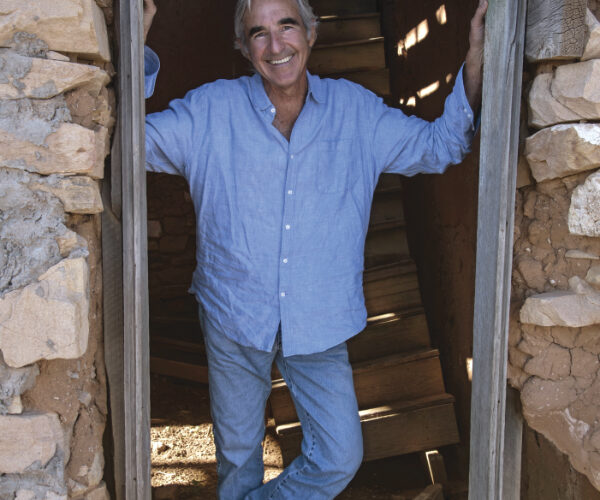 While photographing the town of Duran for The Story of Structures, I was on a corner, hip-deep in chamisa that was on its crunchy, end-of-season last legs.

With only thirty-six residents, hustle and bustle is decidedly not the prevailing vibe in Duran. In fact, in the several hours I had been roaming and photographing, I had only seen one other car on the mostly dirt streets, and no other people.

But then, an impeccably well-maintained late model truck rolled by, slowed, and backed up. The window rolled down, revealing the welcoming face of rancher Shafie “Joseph” Hindi.

“Why, hi there. Are you a photographer?” Hindi asked. I held up my camera, considered it, lowered it, and responded to Hindi: “Why, apparently I am.”

Ice broken, we got to talking. Hindi quickly revealed that his grandmother, Clarita, was a Duran. Yes, that Duran—the town was founded by Clarita’s father, Ventura, and her uncles, Blas and Espiridión, in 1902.

Hindi then continued to briefly explain the markers of his family’s history. His grandfather, Alex Hindi, was born in Lebanon and, in the early 1900s, at the age of approximately 17, he emigrated to territorial New Mexico, where he met and married Clarita Duran. They had seven children, including Hindi’s father, also named Shafie.

“And now I’ll let you get back to photographing. Be sure to check out our church. We’re very proud of it,” Hindi said as he smiled broadly. He passed me his card, and extended an invitation: “If you have questions feel free to call, email, or just stop by for a good, old-fashioned chat.”

Ten days later I returned for that good, old-fashioned, four-hour chat with Shafie, one that included a visit to Hindi ranch, which at its heyday was approximately 100,000 acres with 15,000 sheep and, eventually, the Arabian horses that his grandfather Alex Hindi brought to Duran in 1948. On the ranch, gravestones honor the lives of some those first horses.

Of growing up in Duran, Hindi says, “It was paradise. We were wild and free, yes, but we were also hard-working, well educated, and we looked after each other. We might have a population of thirty-six, but when the church celebrated its 100-year fiesta in 2016, there were 2,000 people here—Durans, Hindis, Madrills, Chavezes, Valencias, Sanchezes, and more for whom Duran is still home”

During our rambling chat, Hindi covered wide-ranging markers of both Duran’s history and the history of his family, including that his family continues to speak English, Spanish, and Arabic. It was a story both universal and personal, with themes of immigration, broad-ranging economic impact, storybook Western myth, and intimate family moments.

“Duran, like many small provincial communities in New Mexico, has a complex and unique history,” said Hindi with emotion. Duran’s addition to the National Register of Historic Places “is a recognition of that. Stories of the past are spoken, family ties are reinforced, and history is kept alive in Duran.”
—

Carrie McCarthy is a photographer, writer, and creative director based in Santa Fe, New Mexico. She currently works with a range of clients to help them navigate the ever-evolving post-pandemic universe.