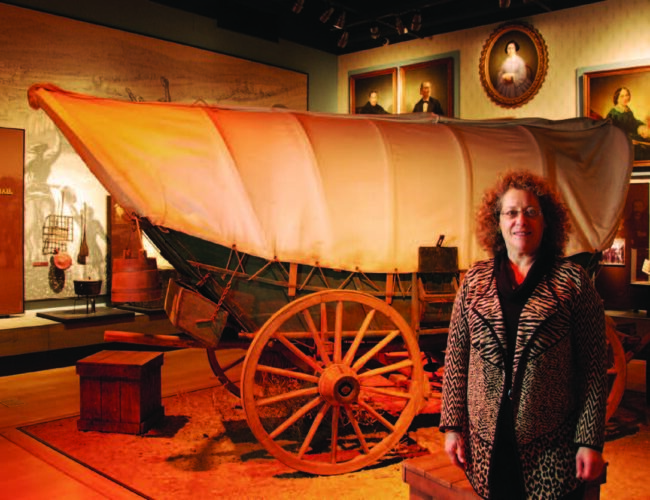 Many El Palacio readers will have heard the news that I am packing up my wagon and heading eastward. On March 15 I leave the New Mexico History Museum, and on April 15 I begin a new position as CEO of the Missouri History Museum in St. Louis.

I don’t have to deliberate too long to think about what I have done with the last decade of my life. In fact, much of what I have done has been reported in the pages of El Palacio—our partner in documenting the collections, exhibitions, and programs that have brought so much positive attention to the New Mexico History Museum. Many of our plans and dreams for the new museum were shared with “El Pal” readers. It has been a pleasure to serve on the editorial board for almost the entire twelve years that I have been part of the Museum of New Mexico system.

I am leaving behind many favorite objects and collections—some of which were first described here, in El Palacio, like the Spanish Colonial painting of La Macana, an image of the Virgin Mary that depicts a statue or bulto that survived the Pueblo Revolt. I remember vividly the moment that curator Josef Díaz and I found her in a crowded colonial art gallery in Mexico City. She belonged here, and with the help of our foundation members (also readers of El Palacio) we were able to purchase her.

In this magazine, in 2009, to mark the inauguration of the New Mexico History Museum, the staff described their favorite objects in the collection. I had a long list but I chose the colcha or hand-stitched tapestry that still hangs in our core exhibition Telling New Mexico. The work that went into producing the piece, from shearing the sheep for its wool, to spinning and dyeing the yarn, to weaving the fabric and then stitching it, is a tale of devotion and craftsmanship that is still so much a part of our Spanish Colonial art traditions in New Mexico. El Palacio readers have learned about many of the collections and specific items—documents, maps, photographs, pinhole cameras, Spanish Colonial paintings, printing presses, and so much more—that we acquired during the first five years the History Museum has been open, and they have learned about the behind-the-scenes care and research that curators and conservators have undertaken to make artifacts ready for exhibitions.

Working with our talented exhibition designers, preparators, fabricators, and careful conservators has taught me that many hands are responsible for the development of our outstanding exhibitions. Our curators, archivists, librarians, and editors have made our exhibitions communicate factual history in engaging ways. Because of the beautiful design work of the graphics team, museum visitors can choose their level of content interest, learning history in an effortless visual way, or delving into the explanatory text. None of our work would have been possible without the support of the Museum Resources team—the Museum of New Mexico Press, Marketing and Public Relations, Conservation, Creative Services—and the administrative support of the New Mexico Department of Cultural Affairs. Museum of New Mexico Foundation staff and donors have been generous; without their support none of our work could soar to the high levels that it has at all of the History Museum’s sister institutions. Our success belongs to us all and is a testament to what can be done with teamwork and sufficient resources.

Many exciting exhibitions are in the works at the New Mexico History Museum. I know some of the thrills that await our visitors in the coming years, and trust that you will read about them here, in El Palacio. For example, soon you will see an exhibition of the Spanish Colonial paintings from Mexico, Peru, and Bolivia that were brought together in the 1940s by Ambassador Charles Collier and his wife, Nina, which once graced their lovely home at Los Luceros, now the property of the Department of Cultural Affairs. You will surely delight in the coming exhibition of toys from our collections, including some examples excavated from archaeological sites in downtown Santa Fe. Next year, in a comprehensive exhibition on the diaspora of Jewish people of fifteenth-century Spain, you will learn more about conversos in New Mexico history. And, in the coming years you will see and learn more about the Fred Harvey Company and the Harvey Girls. By documenting our own times for future generations, photographers participating in the Photo Legacy Project are important contributors to our collections and future exhibitions.

As I begin my journey to Missouri, I am reminded of the topics that connect New Mexico and Missouri history: the Santa Fe Trail, stretching from Franklin, Missouri, to the Santa Fe Plaza, and the Army of the West, led by Col. Stephen Watts Kearny and including the Missouri Mounted Volunteer Regiment. So, as I begin my journey East on that very trail, I am taking with me a stack of El Palacios. I look forward to future issues of the magazine that will keep me informed of news from the home front. I may even have some dispatches to send back to you. In truth, several El Palacio pieces are brewing in my mind already, based on artifacts that the Missouri History Museum staff used to entice me—such as the diary of Stephen Watts Kearney, the lovely portrait of Kearney’s wife, and the hand bills announcing the 1852 inauguration of former St. Louis mayor William Carr Lane as Governor of the New Mexico Territory, at the Palace of the Governors in Santa Fe.