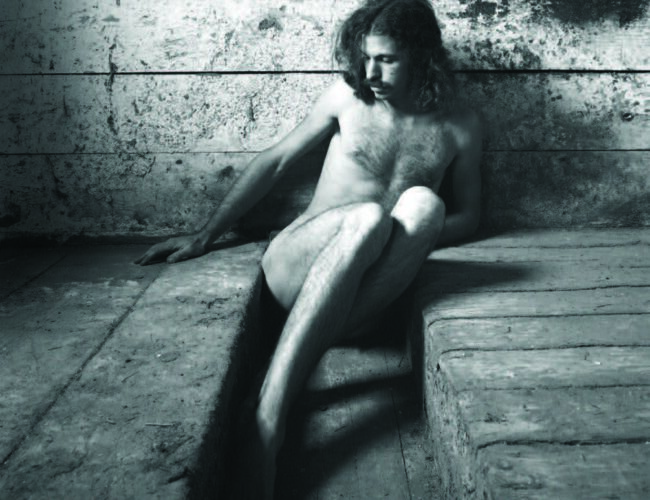 In many ways photographer Donald Woodman is one of the stereotypical free spirits who arrived in New Mexico in a VW van in the early 1970s, searching for a new life unfettered by the conservative conventions and stodginess of the East Coast, to experiment with new-found freedoms involving hallucinatory drugs and liberated sexual exploration. And yet, Woodman’s long, personal aesthetic trajectory, which continues today, is uniquely his own.

Donald Woodman recently left much of his visual legacy, including photographs, negatives, books, and research material to the Photo Archives of the Palace of the Governors /New Mexico History Museum as one of the first contributions to the archive’s ongoing Photo Legacy Project. The museum’s resulting exhibition, Donald Woodman: Transformed by New Mexico showcases images from the period in the artist’s life when he slowly abandoned the formative East Coast and committed himself to a new life in New Mexico. Initially unaware of the “Land of Enchantment” except through his studies and readings in the history of photography, Woodman was soon captivated by the light and landscape of southern New Mexico and the promise of a fulfilling creative life on his own terms.

Woodman’s handwritten 1971–73 diary begins with a series of quotes, the first gleaned from photographer, educator, and editor Minor White, dated October 1, 1971: “In a creative society all people will follow as leaders.” This short quote from Woodman’s most influential teacher and personal mentor is followed by various quotes from Eugen Herrigel’s Zen in the Art of Archery. Originally published in 1953, Herrigel’s account of his six-year exploration through Japanese archery of the theory and practice of Zen Buddhism served as a model for personal practice (in this case the practice of photography) and new ways of seeing and understanding. Zen was then finding a wide audience among those interested in “alternative” lifestyles and exploring Eastern thought in the West.

More clearly than the teacher could express in words, they [Zen practices] tell the pupil that the right frame of mind for the artist is only reached when the preparing and creativity, the technical and the artistic, the material and the spiritual, the project and the object, flow together without break.

Woodman said of Minor White: “He is a rare teacher—judging the time to say the right things” (Woodman diary, October 27, 1971, 11 pm). In the 1960s White was the leading voice for photography’s personal expressive powers, believing that photographic representation was inherently symbolic —that photographs revealed not only their visual subject, but also the inner lives of their makers. Unabashedly mystical, White taught his students that photography could be used for deep psychoanalytical investigations through its metaphoric capabilities.1 White introduced Woodman to the transcendental aspect of the visual experience (and probably to Zen in the Art of Archery). This thinking can be seen in Woodman’s extended photographic series The Therapist, which he began on July 17, 1997, and continued until September 24, 2001. For just over four years, Woodman made one image during each of his therapy sessions with Dr. Donald Fienberg. These images explore the relationship between therapist and patient as well as serving as a vehicle for exploring interpersonal relationships and personal identity.2

Already an accomplished architectural photo-grapher (having graduated from the University of Cincinnati with a degree in architecture and working with the noted architectural photographer Ezra Stoller) when he came to study with Minor White at the Massachusetts Institute of Technology, Woodman spent nearly two years intimately absorbing White’s photographic and philosophical teachings as his student, assistant, and the director of the Creative Photography Lab’s gallery under White’s personal mentorship. Woodman’s first, brief marriage had dissolved, he had made the obligatory solo pilgrimage to Europe to study art and architecture and make photographs, and he was now searching for his own aesthetic path.

White instructed: “Turn the camera on yourself.”3 Woodman took this advice literally through his early nude self-portraits. His diary reveals how deeply he internalized White’s instruction:

And it began to make sense to try out the phenomine [sic] of being the photographer and the photographed as well as the challenge to pre-visualize how I would fit into the rocks without being there. It would test how well I could see what I was feeling & visa-versa [sic]. . . . as I reflect back those were short moments compared w/ what time I spent solving the problem I posed of exploring what Minor had talked about of seeing if I have feelings that I can recognize and believe really exist. Of the moments of quiet peaceful concentration. —(Woodman diary, 1971–73)

Woodman was also influenced by the photo-grapher Edward Weston. On October 8, 1971, during a visit to the Witkin Gallery in New York City, he made an impulsive decision: “I purchased a Weston print and felt totally comfortable about the whole thing, no guilt or second thoughts.” The next day Woodman wrote,

9 October 1971. It is much better to be exposed to things when you are ready. The experience is much fuller and significant, like the Weston Daybooks and the whole Weston exhibit and the print I got. I can see it in my mind quite well. I don’t know why it is staying w/ me, but I know it is going to be significant in my life. I want to get into the Daybooks because I sense a parallel in lifes [sic]. I hope mine is fulfilled to the same extent as his, and I hope it helps keep my interest in keeping this diary.

Like Weston, Woodman made images of many of his models and lovers and continued to keep a diary of his thoughts, photographic and personal, for years. Those diaries will eventually become part of Woodman’s collection in the Photo Archives.

Like so many young people influenced by the Beat Generation’s poets and jazz musicians, and by their own longing for adventure, Woodman caravanned with his cameras and friends across the United States in early 1972 on his first extended road trip. Jack Kerouac wrote in On the Road, that the only people “. . . for me are the mad ones, the ones who are mad to live, mad to talk, mad to be saved, desirous of everything at the same time, the ones who never yawn or say a commonplace thing, but burn, burn, burn like fabulous yellow roman candles exploding like spiders across the stars.”

Mad like Kerouac, following the stars, Woodman left Boston and headed west, eventually to Carmel, California, where he visited with Ansel Adams, another important influence. Writing sporadically in his diary during this trip, Woodman saw the Blue Ridge Mountains, Albuquerque, White Sands, Indian country and Canyon de Chelly, the Hopi villages, Monument Valley, Death Valley, Point Lobos, and San Francisco. It was also on this trip that Woodman first met photographer and former student of Minor White, Richard (Dick) Faller, staying with him at Sunspot, New Mexico, and writing about his “telescope that watches the sun.” Faller worked at the National Solar Observatory at Sacramento Peak in southern New Mexico. The mission of the National Solar Observatory is “to advance knowledge of the Sun, both as an astronomical object and as the dominant external influence on Earth, by providing forefront observational opportunities to the research community.”

Sunspot and the Solar Observatory would become very important in Woodman’s life:

29 May 1972: It happened—yes I go to New Mexico for 6 months. Here I lie between boxes and Tammy Wynette (downstairs). This morning I awake feeling a little sick. I think I’m a bit scared of making the move. I also did a very scary thing Friday—I bought a 1970 VW bus on time: $2000 worth. … 31 May 1972: Today is a very sad day even though I start on a new adventure. I’m on my way to Sunspot for the next 6 months … I leave all of my very good and I hope lasting friends in Boston … And of course Minor who is that someone special beyond description.

Arriving in the desert, he wrote:

11 June 1972: Sunspot New Mexico is a slice right out of middle American suburbia and I fear that if I slip into the mainstream of society here—whatever that is—I will regress about 10 years. . . . At times I lapse into fears of copping out because I am working at an air force owned and operated thing near our famed missile testing site at White Sands. This especially haunts me when I catch the news (which I try to avoid) and it shows the results of our bombing in Vietnam. Haven’t I got any moral commitment to anything I ask myself? Of course, the things that have always plagued me are who I am and where I am going. And yes, what is the concept of work all about. Oh yes, the concept of time has been injected into my veins.

Minor White continued to be important to Woodman, and they stayed close until White’s death in 1976. But by then Woodman was very much embedded in his life and work in New Mexico. He spent five years in Sunspot working at the Sacramento Peak Solar Observatory (then jointly operated by Harvard University and the United States Air Force) as a photo-research assistant, running the film-processing lab, and making films, all the while making his own artwork. During this time Minor White published Woodman’s photographs in Aperture Magazine. Contrary to his expressed fears, Woodman never did become mainstream, wearing his curly hair long, getting involved in anti–Vietnam War efforts, questioning military authority, struggling with his own doubts and fears as an artist, and hopping in and out of bed with all sorts of friends, colleagues, and acquaintances.

In 1977, having left Sunspot and moved to Albuquerque, Woodman wrote of his first meeting with painter Agnes Martin, who is considered one of the great American Abstract Expressionist artists. Although their nearly eight-year relationship was complicated and difficult, bizarre even by the freewheeling standards of the 1970s, Martin would be an important influence on Woodman’s artistic thinking, encouraging him to explore photographic minimalism. Beginning as a filmmaker, Woodman worked as Martin’s personal assistant until 1983, building her a studio and home on his property in Galisteo, and piloting her down the Mackenzie River in Canada’s Northwest Territory in a 14-foot, flat-bottom aluminum boat for five harrowing days. (Woodman is currently working on a book, Agnes Martin and Me.) During 1980–81, Woodman traveled back and forth between Albuquerque and Houston, where he attended the University of Houston and received his MFA in photography in 1981. In 1984 Woodman met the artist Judy Chicago. They married in 1985 and have been collaborating in life and art ever since.

Donald Woodman: Transformed by New Mexico focuses on a small selection of Woodman’s transitional photography, from his early architectural photography to his more personal images made studying with Minor White, on through the scientific explorations at Sunspot and images exploring the light and landscapes of New Mexico, and culminates with an image from The Therapist Series. Each of the images reproduced here and included in the exhibition lead the viewer to look deeply at the colors and at the forms and at the shapes; to begin to understand the relationship Woodman has with his cameras, his world, and with himself as he moves quietly from behind the lens to placing himself in front of the lens.

3. Author’s conversation with the artist, October 2013.

Mary Anne Redding is an independent curator and chair of the Photography Department, Santa Fe University of Art and Design.