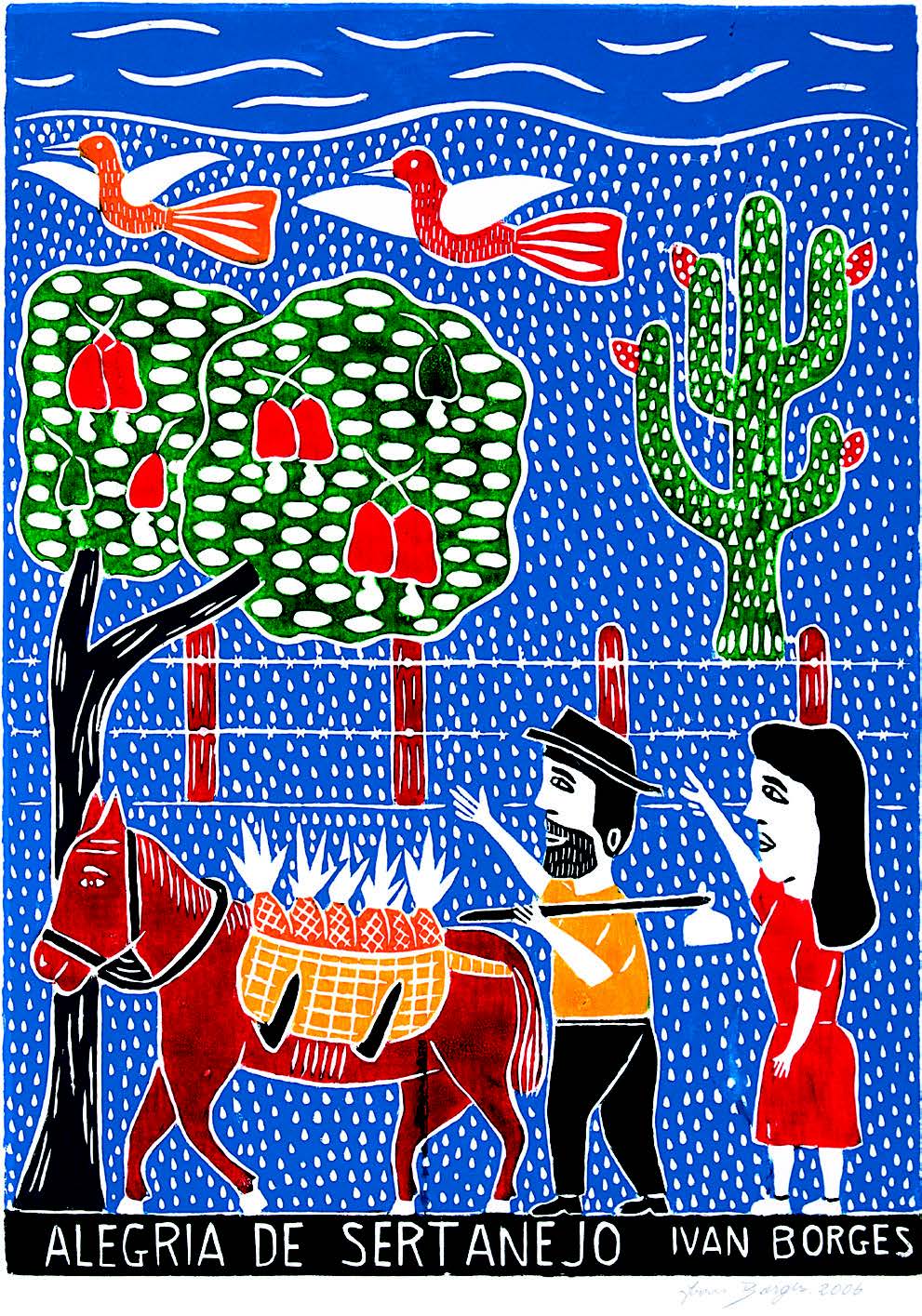 Literatura de cordel (literature on a string) refers to small, hand-printed chapbooks of poetry, which address popular themes, folktales, and legends native to the dry, impoverished interior of northeastern Brazil.

Up until recently these booklets were primarily sold at fairs and open markets in Recife and the interior of Pernambuco, displayed hanging from string. Following a medieval European troubadour tradition introduced by the Portuguese, the Brazilian poets were often the salesmen, singing the stories out loud to a mostly illiterate rural population. Some of the poets taught themselves to do woodcuts, and the covers of their chapbooks feature simple black-on-white printed images relating to the poems.

One of the most famous cordel poets and illustrators is José Francisco Borges, who likes to be called J. Borges. He was born in 1935 in the small town of Bezerros in the interior of Pernambuco and grew up helping his father in the fields. When he was twenty years old, he bought a set of chapbooks from a local poet and became an itinerant peddler, selling them in the plazas and markets of small towns. They sold well, so he decided to write his own. He paid a woodcut artist to do a cover illustration for his first booklet but soon taught himself to do the woodcuts. His images became popular with other poets who hired him to do the covers and print the text for their cordel. Other well-known authors and woodcut artists from Pernambuco are José Severino Cristóvão, José Ferreira da Silva (Dila), José Costa Leite, and Marcelo Soares. Abraão Bezerra Batista, in Juazeiro do Norte, Ceará, has also been doing similar work.

In the 1960s, J. Borges realized that a market was developing just for the images on his literatura de cordel. By enlarging the black-and-white woodcut prints to folio-size or larger, he could create a freestanding art form. He began carving larger woodblocks to produced single-sheet images of religious ceremonies, festivals, and social dances, as well as scenes from folklore and everyday life. This work caught the attention of publishers, art collectors, and gallery owners. Since the 1970s, Borges has received increasing orders for the prints. By the late 1980s, he was experimenting with colored ink to enliven the scenes. This style has continued along with the traditional black-on-white images.

With the success of the larger woodcut prints, other cordel artists, such as José Costa Leite, Marcelo Soares, and Abraão Bezerra Batista, began producing single-sheet images as well. J. Borges also encouraged members of his family to get involved in the work. His brother Amaro Francisco and Amaro’s wife, Nena, became skilled woodcut artists and developed their own styles. Borges brought his adopted son, J. Miguel da Silva, into his workshop to assist and learn the art form. He has become very respected in his own right. Borges’s younger son, Ivan, grew up in the workshop and is now producing beautiful, detailed prints.

Brasil and Arte Popular, curated by Barbara Mauldin, is on exhibit at the Museum of International Folk Art through January 4, 2015. The exhibition features over 300 pieces from the museum’s rich Brazilian collection, including literatura de cordel.

Barbara Mauldin, PhD, has been curator of Latin American Folk Art at the Museum of International Folk Art since 1991. Her most recent book is Art of the Andes, published by the Museum of New Mexico Press.