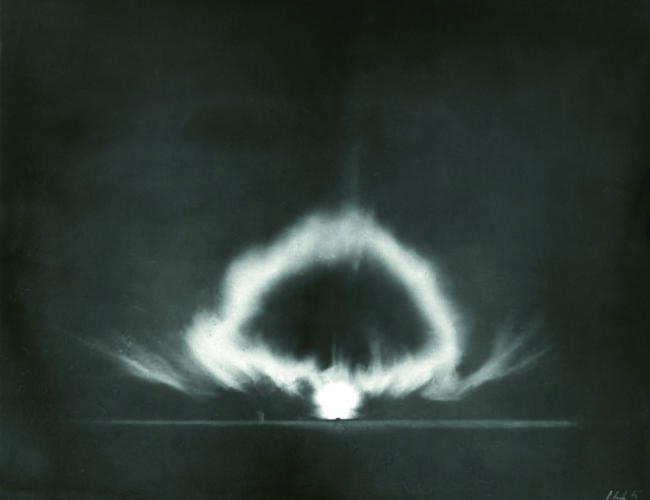 Just imagine the moment: some of the world’s top scientific minds, after working in secrecy for years in Los Alamos, were at White Sands to witness a test of the first atomic bomb.

Among those who had gathered to watch and record the detonation was Julian Mack, physics professor from the University of Wisconsin, who had arrived in Los Alamos via Princeton University. He was, in part, in charge of the optical work, the construction of laboratories, and the moving of two electrostatic accelerators from the University of Wisconsin. Working around the clock on blast measurement recording systems and a myriad of other highly-technical systems required for the test, Mack found the time to pull out a pinhole camera and take this photograph when the bomb exploded. The image captured the brightest flash of light ever produced on earth. So here you have an extreme technological achievement recorded by the most rudimentary of cameras. This photograph will be on view in Poetics of Light, an exhibition opening at the New Mexico History Museum on April 27, where it joins pinhole photographs of flowers, landscapes, and people—all demonstrating that some of the brightest flashes on earth are in a smile or a sunset.