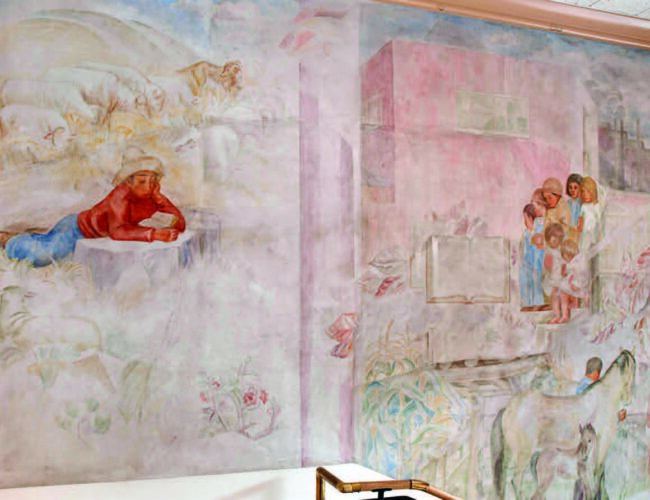 Olive Rush mural on the north wall of the stairs between the Fray Angélico Chávez History Library and the Palace of the Governors Photo Archives. Photograph by Blair Clark.

At first I thought it was a private stairway connecting two of Santa Fe’s hubs of historic research, the Fray Angélico Chávez History Library, above, and the Palace of the Governors Photo Archives, below, whose respective heads, Tomas Jaehn and Daniel Kosharek, are in frequent, direct communication.

Finally I ventured to ask if I might go down the stairs rather than using the slow, claustrophobic elevator as I moved from documents to images in the course of one of my research projects. Stepping through the glass doors onto the wide landing, I found myself in another world, surrounded by imagery that might have illustrated a fairy tale.

The walls are covered with frescoes like none I had seen before. The laborious Renaissance technique of painting directly on sections of wet plaster lends itself to dense compositions of saturated color, yet here were open, airy scenes in nuanced pastels. Solid, stocky figures immediately place the work in the 1930s’ classicizing phase of social realism, but it is handled here with the lightest touch.

On the landing at the top of the stairway, a woman reads to two small children. Her long gown suggests a Muse, but vigas place her squarely in a New Mexico home. On the opposite wall, a young shepherd lies lost in his book, while the sheep that surround him fade out into a gauzy landscape. The angled fields that descend towards the door to the street are covered with vignettes that flow together through sparingly indicated surroundings. Though adult figures are present, the dominant theme is the wonder of books for children, from those selecting titles from the library shelves, to those in remote locations: Pueblo children eagerly crowd around a nun unpacking a shipment of reading materials; youngsters clasping books on the steps of buildings dominated by the smokestacks of the mining industry focus on a giant volume that floats open before them.

The author of this delightful vision is Olive Rush (1873–1966), the daughter of a Quaker minister from Indiana. Determined to become a professional artist, she left college to train at the Corcoran in Washington, DC, the Art Students League in New York, and even on two sojourns in Paris. Supporting herself as an illustrator for magazines and children’s books, she shared a studio in New York with other women artists, including Georgia O’Keeffe, before settling in Santa Fe in 1920. She continued to exhibit nationally and win favorable attention. Reviewing her 1928 solo show in a New York gallery, a newspaper, The Sun, praised her “striking economy of means with a sensitive feeling for decoration.” It was Olive Rush who was proclaimed by another contemporary critic as “Santa Fe’s first lady of the arts” well before O’Keeffe settled in the Southwest.

Rush was known for her delicate watercolors of animals in landscapes inspired by the Chinese and Japanese brush paintings she so admired. But it was the challenge of fresco that seized her from her first experiments as a tenant in the Canyon Road house of Gustave Baumann. The renowned printmaker would later recall his unsuccessful attempt to dissuade the demure but willful newcomer “when she divulged her intention of doing frescoes and no more book illustrations. By no stretch of imagination could I see her delicate hands Olive Rush mural on the south wall of the stairs between the Fray Angélico Chávez History Library and the Palace of the Governors Photo Archives. Photograph by Blair Clark. messing around with plaster and cement. . . . She went right on doing all the things I had ventured to warn her against, and what is more, doing them very well.”

Rush was recognized for her mastery of the technique when the New Deal Federal Art Project began offering competitive commissions for murals in public buildings. She searched out and proposed the library location for her first federal commission in 1934. It was followed by assignments for the College of Agriculture and Mechanic Arts (now New Mexico State University), in Las Cruces, in 1936, and two post offices in Colorado in 1938 and 1939. There were also many private commissions, but little of her mural work survives, and Olive Rush is a name barely referenced in accounts of New Mexico’s artist colonies.

Rush’s unique talent is fully present in the library mural. What I first read as fantasy is actually an imaginative tribute to a historic moment, when in 1929 the library initiated an extension service, sending out books to remote regions of the state. Hence the dual language inscriptions “The Library Reaches the People” and “Con Libros no Estas Solo” on the painted trees flanking the access to the street. I learned that the building now annexed by the New Mexico History Museum was constructed in 1908 by the Women’s Board of Trade and Library. The Washington Avenue façade still bears “Public Library” over the arched doorway, since it has been returned to John Gaw Meem’s 1932 remodel of the original missionstyle edifice. How welcoming Rush’s imagery must have been to children headed for the Children’s Reading Room, which was on the lower floor! It was here that the artist sketched studies of young readers in preparation for her fresco.

Though the stairway is no longer a public entrance, it can still be visited by inquiring at the Photo Archives or the Chávez History Library, both open 1:00–5:00, Tuesday–Friday. Tomas Jaehn tells of one of his first days as the newly appointed History Library director in 2000, when two elderly ladies came to see the mural. They proudly pointed out to him their own portraits among those of the little girls depicted over half a century earlier to populate Olive Rush’s land of literary enchantment.