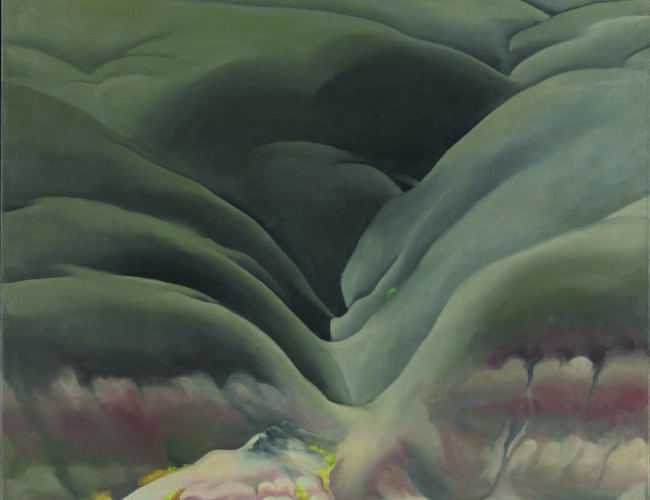 There are few artistic figures regarded more highly for their originality and individualism than Georgia O’Keeffe. Iconic and iconoclastic, independent and intrepid, O’Keeffe’s contribution to American culture is characterized by a compelling blend of innovation, revelation, and dogged determination. She was truly one of a kind, but she was not alone. Despite the popular perception of O’Keeffe living in isolation in the desert of New Mexico, she was never far removed from the latest developments in the art world.

As intriguing as O’Keeffe’s art and life are, she becomes endlessly more interesting in the fuller context of her times. Long before moving permanently to New Mexico in 1949, O’Keeffe was part of the most advanced artistic and culturalcircles in this country. She maintained a lifelong network of friends including notable artists, writers, musicians, designers, and thinkers. O’Keeffe was regularly visited by and frequently corresponded with some of the most fascinating and influential minds of her era.

It takes nothing away from her accomplishments to recognize that she was one of a group of sophisticated artists who broke with past traditions to define a new art for this country, an art that expressed the energy, vitality, and experience of modern America. To see her in dialogue with other artists, including other members of the Alfred Stieglitz circle, further enriches our appreciation of her role and significance in the development of modern art.

The resources of the Georgia O’Keeffe Museum — our collections and galleries in Santa Fe, the deep holdings of our archive and Research Center, and the home and studio in Abiquiu — and the remarkable landscape and history of northern New Mexico allow an unparalleled insight into O’Keeffe’s artistic life. But to grasp the broader significance of modernism, it is important to consider the artistic context in which she worked and to see the work of other artists that were part of the conversation — the artists that O’Keeffe looked at, responded too, even competed with from time to time.

This autumn, Santa Fe has an outstanding opportunity to experience this context firsthand through a series of exhibitions and gallery presentations on view throughout the city, all part of Fall of Modernism 2015: A Season of American Art, a citywide collaboration that runs from September 11, 2015, through January 17, 2016. Anchored by a partnership between the New Mexico Museum of Art and the Georgia O’Keeffe Museum, residents and visitors alike have an opportunity to enjoy the artwork of O’Keeffe and her contemporaries in depth at both institutions. A joint ticket will make it easy to see exhibits at both museums, and members of either institution will enjoy reciprocal benefits and discounts at the other museum.

At the Georgia O’Keeffe Museum, we are showing From New York to New Mexico: Masterworks of American Modernism from the Vilcek Foundation Collection, bringing one of the country’s finest collections of modernist art to Santa Fe — or perhaps it is more accurate to say back to Santa Fe, since the collection actually has a local genesis. It features more than sixty masterworks from the 1910s to the postwar era by America’s most original abstract painters, including Georgia O’Keeffe, Marsden Hartley, Stuart Davis, Arthur Dove, and a dozen others.

While the Vilcek Foundation Collection fills much of our galleries on Johnston Street, we are lending more than forty O’Keeffe paintings and related drawings and objects to the New Mexico Museum of Art for the exhibition O’Keeffe In Process. Between our two venues, just steps apart, there will be more great modernist art on view in Santa Fe than anytime in recent memory.

The Vilcek Foundation Collection makes evident that modernism is not monolithic: there is no single approach to painting, no exclusive subject or preferred medium that defines modernism so much as its spirit of insistent innovation and daring departure from the past. America’s first generation of abstract artists challenged traditional norms of naturalistic image-making during the early decades of the twentieth century. Rather than following a long-established preference for creating paintings that imitated the appearance of the visual world through conventions such as perspective, these artists sought to convey more immaterial concepts. Instead of using color or form to narrate a story or describe a particular person or place, modernists used the language of art — lines, shapes, colors — expressively to communicate emotion and experience, much the way music can move the spirit in ways that descriptive words cannot. Often starting with careful visual observation of the surrounding natural world, they created abstractions that distilled subjects down to essential elements. Locations and themes that were perceived to be uniquely American — New York’s dramatic skyline, the jagged coast of New England, or the landscape, cultures, and traditions of New Mexico — were translated into dazzling geometries and riotous colors.

Running throughout the Vilcek Collection are several key themes, reflecting the multiple pathways artists followed into modernism. In “Nature” are images by artists, particularly those gathered around Alfred Stieglitz, who expressed an interest in the spiritual power of the natural world. Arthur Dove’s Below the Flood Gates — Huntington Harbor is a swirling dynamo of natural power and force. Lines converge and forms fold in upon one another with all the energy of a torrential flood. Strictly speaking, it looks nothing like water; instead, it feels like rushing water. Equally energetic paint handling is used to convey a very different experience of nature in a painting like Marsden Hartley’s Silence of High Noon — Midsummer, a still, airless moment of communion with the landscape of his native Maine.

“Town & Country” brings together views of the New York skyline and other structures of modern life, including bridges and the suburbs (a relatively new phenomenon that promised the space and comforts of the country with convenient access to the city, even if the realities were often less ideal). John Storrs’s steel, copper, and brass sculpture Study in Pure Form (Forms in Space No. 4) feels much like the rising spires of a city skyline that has been purified in some way, the essential lines and massing retained but extraneous detail eliminated. Ralston Crawford’s enigmatic ink and gesso, Rockefeller Center, is equally reductive and minimal in recording the construction of a real-world cluster of skyscrapers. He does not portray the buildings themselves, but the tops of the cranes and cables that lifted the buildings into place, piece by piece. Black-and-white, fragmented silhouettes reduce the construction equipment to abstract lines and forms.

“Cubism” reflects the ways in which American artists adapted the ideas and aesthetic of the European avant-garde to domestic subjects. As happened in many nations during the development of modern art, artists in the United States also sought out distinctly American imagery. Conceived explicitly as an American response to French cubism, three large (50 × 32 in.) Stuart Davis canvases are one of the highlights of the collection. Still Life with Dial includes a winking acknowledgment of Picasso’s frequent inclusion of “Le Journal,” replaced in Davis’s painting by “The Dial,” a magazine popular among modernist writers and artists. Max Weber’s sculpture Figure in Rotation conveys how cubism and the freedom of abstraction could even be carried into three-dimensional representations of the figure.

In the final section, “American Southwest,” are works inspired by this region, which served as a spiritual and creative oasis. Some artists sought a deeper connection to nature and a mythic past, even as some seemed to retreat more to clichés of the West. Jan Matulka seems to have done a little of both, painting a fascinating synchromist abstraction of a Pueblo dance in Indian Dancers (based upon a trip to the region in 1917) and then, in Rodeo Rider, creating a painting of a cowboy that could just as easily have served as the cover of a tourism brochure. And of course there are the landscapes, from Marsden Hartley’s several New Mexico Recollection paintings to O’Keeffe’s Black Place II. Like a number of works in the Vilcek exhibit, a companion piece, Black Place, Grey and Pink is on view at the Museum of Art.

As complementary experiences, the presentations at the New Mexico Museum of Art and the Georgia O’Keeffe Museum allow for some wonderful comparisons and create conversations between artists. Consider, for example, the work of Arthur Dove and Georgia O’Keeffe. The visual affinities between her 1919 work Series I — No. 10 A and Dove’s painting Penetration, from 1924, are immediate in terms of composition and interest in abstraction. Among the earliest and most original abstract painters to emerge in the 1910s and 1920s, both were encouraged and supported by Alfred Stieglitz. Even before Dove and O’Keeffe met in 1918, O’Keeffe had admiredDove’s work. Both respond to the natural world and visual observations, yet the finished works are first and foremost artistic creations — paint on a two-dimensional surface rather than an illusion of space and depth as perceived by the human eye. This is one of the big takeaways of seeing so much great modernism in one place. For all the variations in style and paint application, all the diverse subjects, they all reject the impulse to merely imitate appearance, dismissing centuries of artistic convention in favor of innovation and abstraction.

At the Museum of Art, one can also see O’Keeffe still lifes to contrast with still lifes in the Vilcek Collection, including works by Stuart Davis, Andrew Dasburg, Marsden Hartley, and Max Weber. Even here, in a genre rich with art-historical precedent, the modernists diverge from older traditions, picking up and extending the innovations of artists like Cezanne and Picasso, disrupting the pictorial space, flattening out depth to create intriguing surface patterns. These scenes are quite literally “stilled” by definition, but there is something very modern about that stillness, which emerges in other subjects.

In landscapes and cityscapes alike, so many of these works seem timeless and frozen, free of action or narrative. By focusing on the latticework of lines formed by cranes and cables, Ralston Crawford draws our attention to a visual experience in which all the drama and action of building the world’s largest private construction project are evacuated. This seems true for so many of the modern works. Even when the work is energized by brushwork, dynamic lines, and vibrating compositions such as employed by Stuart Davis or in Howard Cook’s Complex City, the energy and excitement are created by the artists’ manipulation of their materials and do not depend upon emotional associations, analogies, or symbolism. It is a simple but powerful way to think about modernism: take note of what has been eliminated. Shedding the theatrical tricks of the past, these artists strive to speak to us directly in their own language, if we’re ready to listen.

This winter truly offers a unique opportunity to pause, look closely, and listen. We see outstanding artworks in each venue, and each project stands on its own merits, but they become even more meaningful and powerful as a shared experience. Please move back and forth between our buildings — it really is a very short walk, and the joint ticketing makes it simple. Surrounded by the work of her peers and fellow modernists, one can better assess O’Keeffe’s originality and sophistication. It also becomes more evident that she is part of a dialogue about the nature of art — art freeing itself from the tyranny of imitation and strict realism in favor of abstraction, an art that seemed more suited to the task of expressing the conditions of modern life. A century after these artists began rejecting convention and upsetting critics, their work continues to enthrall, excite, and challenge us.

Cody Hartley is the director of curatorial affairs at the Georgia O’Keeffe Museum.