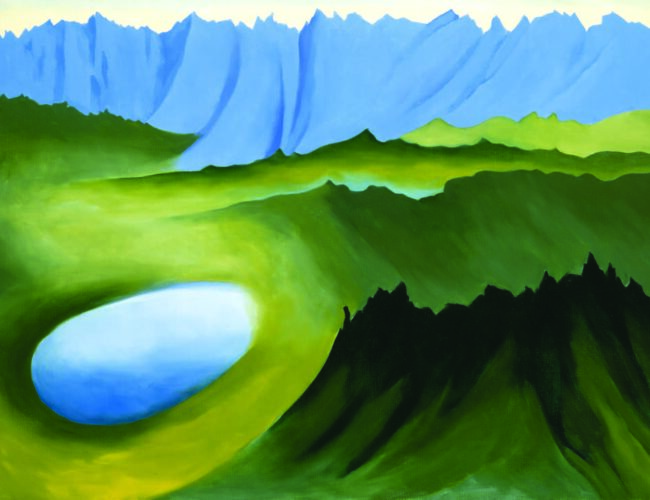 I was the sort of child that ate around the raisin on the cookie and ate around the hole in the doughnut saving either the raisin or the hole for the last and best. So, probably—not having changed much—when I started painting the pelvis bones I was most interested in the holes in the bones—what I saw through them—particularly the blue from holding them up in the sun against the sky as one is apt to do when one seems to have more sky than earth in one’s world . . . they were most beautiful against the Blue.

In a 1960 photograph, Tony Vaccaro captured a playful moment: Georgia O’Keeffe sitting in the backseat of a car enjoying a snack with a cup in her right hand and, with her left, holding up a piece of Swiss cheese to her face. Squinting with one eye, she looks through a large hole in the cheese with the other, as one would look through the viewfinder of a camera or telescope.

O’Keeffe recounted that when she first collected and painted animal pelvis bones, which she found exposed and sun bleached in the northern New Mexico high desert terrain where she painted and lived, she was most interested in the holes—the hip-socket hollow where the ball of the femur head would fit. That negative, oval shape became a frame for viewing.

Active as an artist over seven decades of the twentieth century, O’Keeffe developed her unique style and assured handling of materials early in her career. She became one of the most revered American modernists, and her paintings are some of the most instantly recognizable works by an American artist. Beginning with some of her earliest portraits, of family members, created while a student, O’Keeffe In Process includes work from her formative years to the 1960s, looking at what makes an O’Keeffe so distinctly an O’Keeffe.

Many of the artworks in the exhibition, at the New Mexico Museum of Art through January 17, 2016, demonstrate O’Keeffe’s fascination with holes and with the space around forms. The oval view through the pelvis bone echoes other uses of the shape throughout O’Keeffe’s body of work—a shape to look through and divide space.

The lake in Mountains and Lake (1961), for example, closely resembles the shape of the hole in the pelvis that O’Keeffe kept as both a model for her paintings and an object of home décor. In this exhibition, the pelvis bone is displayed in a floor case in the same orientation that O’Keeffe displayed it at her residence, allowing the socket hole to be viewed in relationship to the art on the walls. The form of the lake in Mountains and Lake is similar to the negative space in an earlier O’Keeffe painting specifically based on the bones, Pelvis IV (1944), in which the composition is closely cropped into the pelvis bone and the hole frames a view of blue sky.

In two Alligator Pears (avocados) paintings that the artist created at the beginning of the 1920s, nearly a decade before she began collecting bones, O’Keeffe employed the oval to define negative space and divide the compositions into colored zones. For O’Keeffe, the oval was both a design element and an optical tool for demarcating a composition like a camera viewfinder.

Even earlier, in two House with Tree watercolors and a linoleum block-print portrait of O’Keeffe’s friend Dorothy True, O’Keeffe encircled negative spaces as if they were holes or perforations. The artist played with negative space, leaving patches of bare paper. She defined her forms with outlines of blank paper that read as white and used color to carve out the negative space of untouched paper. This effect is the visual opposite of that created in postimpressionist cloisonnism, wherein forms were outlined and bound in black. Instead of outlining a form and filling it in, O’Keeffe left the outlines bare in these artworks. They are an early example of the artist’s interest in framing specific elements within her compositions.

Much later in her career, O’Keeffe painted From the River— Pale (1959), a view of a river from the air in which she used a tree branch as her model for the shape of the river. In this painting, she used chartreuse to carve out the white shape of the river, recalling her approach to figure and ground in her earlier watercolors and linocuts. But here she is more dramatic, refined, and precise in her application of oil paint, which gives the impression of an area being masked out.

O’Keeffe In Process features thirty six O’Keeffe oil paintings, fifteen works on paper, supporting materials drawn from the collection of the New Mexico Museum of Art and many works generously loaned from the Georgia O’Keeffe Museum, and a private collection courtesy of Gerald Peters Gallery. The exhibition tells the story of the working technique of this twentieth-century master and spans her career. Preliminary sketches and photographs hung alongside finished works reveal the steps in O’Keeffe’s creative process and her technical, art-making process. Included are early student portraits of family members, made in 1905; work created during stays at Lake George, New York, in the late teens and first half of the twenties, including examples of O’Keeffe’s iconic, cropped, macro presentations of flowers and leaves; characteristic New Mexico depictions of animal bones and landscapes; and her later discovery of the view from the sky, introducing distance and a perspective at a far extreme from her earlier close up views.

This exhibition is part of the Fall of Modernism, a citywide collaboration, anchored by the New Mexico Museum of Art and the Georgia O’Keeffe Museum, that celebrates the modernist art movement in America. O’Keeffe In Process offers a rare opportunity to see artworks from both museums’ collections brought into dialogue together in one space.

Carmen Vendelin is curator of art at the New Mexico Museum of Art. She organized O’Keeffe In Process and is curating Stage, Setting, Mood: Theatricality in the Visual Arts, which will be on view February 5–May 1, 2016, as a complement to the traveling exhibition First Folio! The Book That Gave Us Shakespeare.