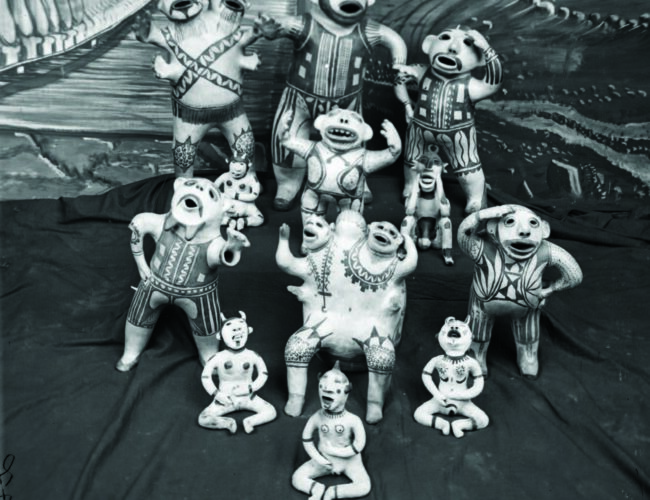 He thrust his huge head forward, his mouth open. He held out his left hand, fingers spread wide with energy while he clutched his right hand to his chest. Despite his urgency, I would turn away. I was not coming to the Buchsbaum Gallery at the Museum of Indian Arts and Culture to study this emotive anomaly.

I was there to grapple with the characteristics of the ceramics of different pueblos. The groupings of pots juxtaposed in the cases offered me a more effective learning tool than the books where I had already gathered that Native ceramic achievements lay in vessels.

Only with the excuse of my “Why This?” column did I succumb to the clay man’s entreaties to investigate the why and how of his existence. His label stated he was made at Cochiti around 1880. I had read that this was the period of decline of Pueblo pottery. Yet clearly only a master potter could have fashioned so large a figure that did not collapse in the kiln. My admiration increased when I learned that such effigies were hand coiled. MIAC curator Tony Chavarria explained how their legs and lower torso had to be built first and dried so that they could support the upper body. He himself was amazed to find that the construction of every example was calculated so that it could stand on its own without support.

Getting down to research, I found that the piece was not unique, albeit one of the largest and most impressive of its kind. Human effigies were rare in Pueblo ceremonial traditions. Their production seems to have originated around 1875 and waned around 1910.

The Pueblos had always created products for trade, and the advent of the transcontinental railway in the 1870s made for a new Anglo market. The following decade saw a collecting fever in the Anglo community, which was intent on preserving the artifacts of what were thought to be disappearing cultures. The craze was fed by specialized dealers, the most important of whom were based in Santa Fe. They encouraged local production and funneled it to a national curio network. In many cases the nature and age of wares were romanticized or outright falsified.

The Palace of the Governors Photo Archives contain photographs by Ben Wittick, dating around 1880, of figures from the inventory of Aaron Gold, one of the first specialists in Santa Fe’s curio trade. They are honestly labeled simply as Pueblo Indian pottery. However, a 1901 publication on Indians in New Mexico, shared with me by Bob Gallegos, a current specialist in the trade, identified one of the Wittick groupings of Cochiti pieces as “pain gods.” The fanciful text explained how each was clutching the offending body part to indicate colic, a toothache, or other ailments.

The notion that these were gods was soon debunked by anthropologists. In his crusade to improve Pueblo ceramics, Kenneth Chapman condemned the figures as “grotesque” and excluded them from the first Indian Market in 1922. Interest in the old figures revived in the sixties and seventies, when dealers Dick Howard, Rick Dillingham, and Bob Gallegos began showing them to contemporary potters. Virgil Ortiz and his family continue the tradition in updated form.

In 1965 the piece was accepted as a donation to the museum and even featured in the inaugural exhibition of its new building in 1987. The tide had turned. What had been dismissed as a tourist curio was reinterpreted as a Pueblo potter’s response to the outside world. Although his open mouth suggests he is one of the singers that surround the drummer in every Pueblo ceremony, his carefully delineated foreign garb of shoes, suspenders, and ruffled shirt are as part of a caricature of the “other.” In Pueblo terms, he is a “mono,” or monkey. This humorous social commentary is explained in the MIAC exhibition Into the Future: Culture Power in Native American Arts (through October 22, 2017).

The figure is now an important representative of the Pueblo tradition of clowning, but we will never know the words of his song. Who is he mocking? Perhaps the museum visitors who ignore him to seek the achievements of Native ceramic art only among the surrounding pots.