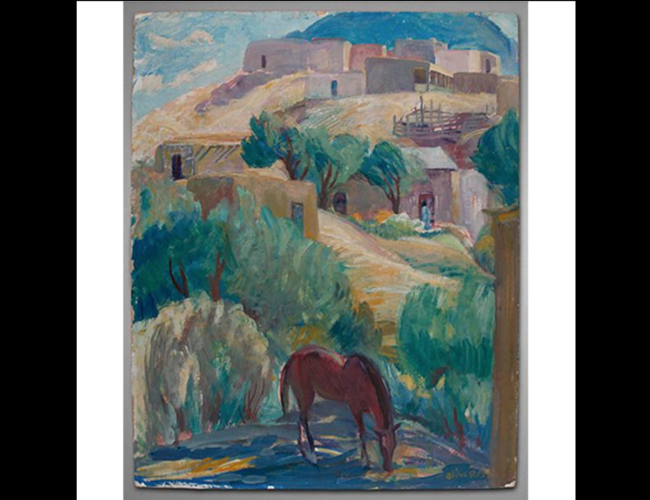 Finding Her Place in the Santa Fe Art Colony

By May 15 the party had arrived in Santa Fe, New Mexico, where they found an enchanting town. Olive and her family stayed at the Hotel de Vargas. Olive found plentiful subject matter for her art in Santa Fe. In a letter to Ethel Brown, she describes her accomplishments. “What thinkest I’ve been doing all day gentle one? Painting pretty Indians and longing for thee,” she told Brown. “A most amusing clever old curio Indian trader and his son-in-law have been royal to me—they asked me to use their funny old store or their adobe backyard to pose Indian models in—and they get me the models—anybody I like—and tell me to use anything in their store to pose them in—and they have everything under the sun!”

The sisters then went on a day trip to Taos. Olive and Myra traveled on a narrow-gauge train through canyons and cliffs and then by stage for the last twenty-five miles. While in Taos, Virginia Walker Couse, the young wife of Eanger Irving Couse, gave an informal tea. From exhibitions held in the East, Rush knew the work of E. Irving Couse, who was a founding member of the Taos Society of Artists and its first president.

Back in Santa Fe, Olive sketched in the placita of the hotel where they were staying, which she described as an “old adobe Spanish building.” Shortly thereafter she was excited to learn that she was being asked to hold an exhibition at the Palace of the Governors in Santa Fe. Although this would delay her departure, Olive realized it was an opportunity she could not pass up. Meanwhile, Olive and Myra continued to take side trips to various Indian pueblos, including Tesuque Pueblo and Santo Domingo Pueblo. Both were enthralled by what they saw of the Native culture.

Olive felt a friendliness and receptivity in Santa Fe from everyone she met. Among her acquaintances was Paul A.F. Walter, a German-born journalist and Santa Fe’s cultural ambassador-at-large, who was responsible for Rush’s first exhibition in New Mexico. He became friends with Edgar L. Hewett and Frank Springer, early leaders in the art and cultural communities of Santa Fe. Walter was also a longtime editor of El Palacio, founded in 1913 by Hewett.

The exhibit was significant both for her career and for the history of the region. It was the first solo exhibition afforded a woman artist in New Mexico and received widespread publicity and praise.

Finally, it became time for Olive to return to her hectic life in New York City. It is clear, however, that Santa Fe had charmed Olive, and her experiences there remained with her. Rush was enthralled by Santa Fe’s unique multicultural community; the public acceptance her artwork received there; and the ubiquitous subject matter she found in the city to paint. Santa Fe also offered her a growing community of artists, where she fit in comfortably and where she could live more cheaply than back East or in the Midwest. Her first visit to the city had given her a major foothold on Santa Fe’s burgeoning cultural stage and set in motion a plan that would take another six years to implement: to settle permanently in the adobe-clad city.