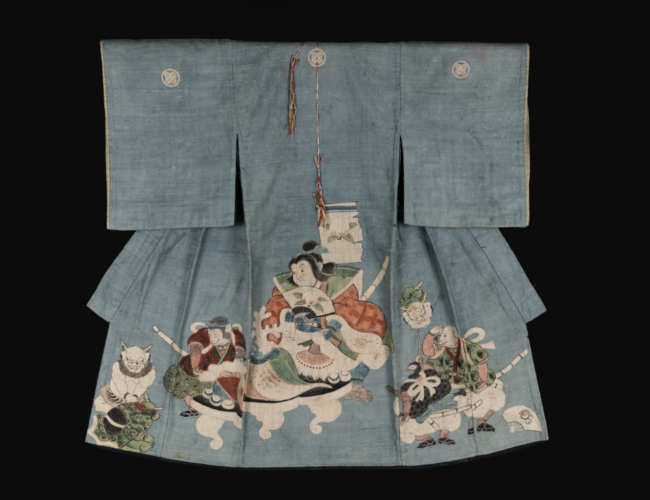 Boy’s Miyamairi Ceremonial Kimono with Depictions of Momotaro and Defeated DemonsJapan, Edo Period. Fabric, indigo and other natural pigments. This kimono is part of the Museum of International Folk Art’s Yokai: Ghosts & Demons of Japan. On view December 6, 2019 through January 10, 2021. Courtesy of Geraldine Whitman. Photograph by Addison Doty.

But it is very, very tidy and very, very clean. It’s the opposite of what one might imagine as the lair of mad scientists, and more like a newly remodeled preschool classroom on the day before school starts. But, make no mistake, mad science is going on.

Across town, at the Museum of International Folk Art, visitors to the Flamenco: From Spain to New Mexico exhibition see the firsthand results of both the arcane mysteries and good craftsmanship that flow from the lab. In an exhibition that brings together everything from old LPs to shoes, castanets, and even an extravagantly flowered horse bridle, it is the collection of costumes that stands out. And it’s a feast of glitter, gilt, and glamour, almost all evolved from the original peasant and farmer’s clothing of the early nineteenth century.

It is people like Angela Duckwall who make these costumes sing. Duckwall, senior textile conservator for the Museum Resources Division’s Conservation Department, trained in one of only four textile conservation programs in the country, and is a veteran of the high profile labs of the Smithsonian Institution. She is less mad scientist and more alchemist. Tall, with curly hair, and eyes that shine passionately once she starts talking about dyes or exotic sewing techniques or how hard (but fun) it is to get a two hundred-year-old dress to drape just right, she’s a far cry from the ancient, mercury-stained guys trying to turn lead into gold. Instead she transforms the damaged, worn, and dangerously decrepit into beautiful objects that are lodestones for stories about culture and art. And most of the time, if everything goes well, nobody knows.

Just past the fountain and the tiled walls of the Spanish-inspired courtyard that serves as the entrance to the exhibition, there’s a matador’s costume from 1888–1920, “a perfectly good example of what happens when textile conservation goes according to plan,” says Duckwall. And it shows. Despite the colors and the ruffles and the brocades that make up the other traditional outfits in the room, this ensemble stands out. The forest-green fabric, gold thread, and iridescent sequins of the traje de luces (suit of lights, designed to dazzle) accompany bright red stockings, black slippers, and a montera, a black felt hat meant to symbolize the bull’s head and horns.

“I generally ask a couple of questions at the very beginning of almost any exhibition like this,” Duckwall says. “The first is whether or not the piece can survive being displayed. Can it weather both the work that might be needed to stabilize, and maybe to clean it? Can it be displayed in a way that doesn’t threaten its integrity? The second question is whether I can do anything for it.” If yes is the answer to both of those questions, she rolls up her sleeves and gets to work.

“Generally, to figure out how things were worn, and during what period,” Duckwall says, “I’d take a look at the databases, and maybe contemporary periodicals and journals.” The databases are the comprehensive references, maintained by the Victoria and Albert Museum in London or the Kyoto Costume Institute, with both historical and contemporary examples. Periodicals are useful because they often show clothing in use.

“But flamenco costumes, and particularly matador costumes, don’t really change much with fashion,” Duckwall says. The matador costume is an ensemble of pieces from different suits. It was extensively worn and repaired, indicating perhaps that it was used in theatrical contexts. That’s a good thing in her mind, and in those of her fellow conservators. “Repairs tell stories,” she says. “Part of my job is whenever possible to preserve those stories.” She noted that the matador costume wasn’t in terrible shape, but it was clear it had been used long and well during its life. The costume had endured numerous visible repairs, and the arms and collar showed a lot of wear.

Part of her job is also to take a close look at those repairs and determine whether or not they are harmful. She looks for stitching that she might be able to redo to take stress off of seams, or for evidence of corrosive adhesives that she might need to replace. Maintaining the integrity of the original piece is terrifically important.

“I really felt drawn to the piece—after all, it’s shiny and sparkly, and absolutely iconic,” Duckwall says. She reattached and secured most of the metalwork appliqués, reattached many loose spangles, secured dangling metal threads, overlaid most of the outer surface of the vest, and stabilized several ripped seams. She also spent a few days creating a custom dye for fabric she used to stabilize some edging, matching the current coloration through a painstaking process of trial and error; repaired a section where the warp had loosened, causing the fabric to begin to pull apart; and corrected a couple of poorly done repairs.

“There’s only so much you can do,” Duckwall says. Take the spangles and metal thread, for instance. The curator was hoping they could be cleaned in order to really shine and catch the light. “I could not clean the spangles or the metal thread because it would damage the silk fabric they are attached to. At some point,” Duckwall says, “you’re done and it’s time to move on.”

Moving on means dressing the mannequins, which raises a host of other interesting problems. First up: making sure she knows what’s going on under the costume. “Usually,” Duckwall says, “I have to worry about undergarments, and whether or not I have to make a corset, or a bustle, or a hoopskirt. Nothing like that—thankfully—with the matador.”

Tight is good, at least in the case of a dancing matador’s costume. But how best to display it? That’s a question that Duckwall struggles with almost every time she faces an essentially empty room, walls freshly painted, with an exhibit-plan photocopy in her hand. Sometimes the curator has a strong opinion, and rich imagination. “Just imagine dresses hanging from the ceiling caught in the act of swooping across the room. That’s hard,” says Duckwall. “Happily, Flamenco wasn’t that.”

What the exhibition does have is about thirty different costumes, ranging from nineteenth-century folk ensembles to contemporary dresses, including one by Haruhiko Okuhama designed for a man’s body (except for less fabric at the chest and hips, almost precisely the same as any other slinky paean to Andalusian Roma culture). Duckwall says that the very diversity of the costumes illustrates a perennial problem for people like her when it comes time to put the exhibition together: mannequin size. Unlike human bodies, mannequins don’t come in every size and shape. And until pretty recently, clothing did. The result is that conservators have a few basic mannequin shapes, and clothing of all sizes, to work with. In most cases, says Duckwall, “contemporary mannequins—particularly when you’re dealing with women’s clothing and older textiles—are simply too big and require saws, files, scissors,” and, one presumes, the occasional hatchet to get it just right.

“We were lucky,” says Duckwall. “Most of what we had to do was additive rather than subtractive.” Additive, because even with mannequins in the Goldilocks zone—neither too small nor too large—the hard, manufactured bodies don’t begin to do justice to the variations of their human counterpart. What are missing are all the undulations of muscle and fat that matter a lot in how a worn piece of clothing might look— particularly on the body of career dancer.

This is where the textile conservator’s skills as a sculptor come into play. Working with a standard-sized mannequin, she covers it with a stockinet, which serves as a base for the layers of polyester felt batting that will buff out the mannequin’s form. A thick batting serves a skeletal role, allowing Duckwall to change the fundamental body shape of the mannequin, for instance, as with the matador, broadening the shoulders. Duckwall uses the medium batting to sculpt musculature, adding the effects of an athletic life spent moving and dancing. Finally, she uses the thin batting to smooth the appearance of the new body under the clothing. It’s a slow process, but one that she finds enormously satisfying.

The one concession Duckwall made, she says, was with the matador’s trousers. They are intended to be skintight, calf muscles rippling underneath. But she was worried that the material couldn’t support that snug sort of preparation, so visitors see a slightly looser version of the costume than one painted on a performer.

We see the story of how this provincial art form, its distinctive look, practiced mostly by outsiders, became not only a global force but an intrinsic part of New Mexico’s culture. What we don’t see is the subtle, important work that literally holds these costumes (and their stories) together.

Peter BG Shoemaker is a former historian and archaeologist turned writer and poet—little change, as it turned out. More at petershoemaker.com.