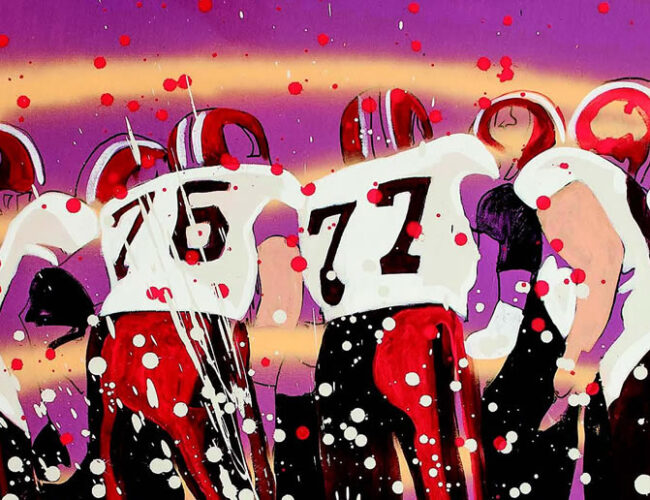 I’ve noticed that we don’t witness anything firsthand any longer. Our first reaction to anything that happens in real life is to record it, post it, snap it, share it.

The title of my solo show, I-Witness Culture, is a play on words referencing the iPhone and the change that its technology has brought to our social construct at the expense of the grace of experience and the intimacy of being in the moment. I started this series three years ago. I think you should experience reality in the moment, firsthand, and not through a digital filter. We’re losing our ability to relate to each other, to be humane and polite to each other. Social graces are not being passed on. That’s why doing this work about cell phones and the Internet and social media is important. And in fifty or sixty years, when people look at my paintings, they are going to say, “Wow, that was when cell phones were handheld and not chips implanted behind our ears.”

And so one of the narratives in this show is the digitization of reality. We now experience our lives through devices. On the positive side, these devices additionally act as tools for activism, advertising, and fundraising. The cell phone has replaced sketchbooks for me in my studio practice. I’m always gathering source material, and my mind is always editing. One painting informs the next one, and so on and so forth. I used to have twenty or thirty sketchbooks with ideas, doodles, cool phrases, and photographs that I wanted to use, and now all of those things are stored and recalled on my phone or laptop.

Unfortunately, in this digital age, a generation of artists hasn’t taken the time to learn the fundamentals of art, like drawing and proportional anatomy. They go straight to Adobe Illustrator and are able to regurgitate images with software and a printer, and I don’t think that’s necessarily a good thing. I’m a purist when it comes to making paintings. I think the act of putting a brush on the canvas is exactly the opposite of the cyber reality on the Internet. It is a visceral experience. For me painting is very romantic and noble. I equate it to fashioning your own light saber.

One of my earliest themes was the mythological status of Native Americans before 2000. The United States and the world at large believed that the indigenous people of North America were extinct. So whenever they came across one of us, they inevitably would touch our hair and take a picture with us, recounting the long-lost great-grandparent who was Cherokee. Seeing an Indian was like seeing Bigfoot.

The paintings that I make hold a mirror up to that sort of mentality to show how ridiculous it is to equate sightings of Native Americans with sightings of mythological creatures. There’s a lot of satire involved in my work. People either get it or they don’t. Usually the title will give you a window into the content; it’s the final flourish that finishes the painting.

Cultural appropriation is also a constant theme that I address in my work. Popular culture homogenizes indigenous peoples, “honoring” us with fashion lines, misogynistic music videos, or offensive mascots and Halloween costumes. It seems as though it’s open season on indigenous iconography. How would Catholics feel if advertisements started using pope hats or bishop hats in their advertisements to sell lingerie? Or in music videos? They would lose their minds. It would be the backlash to end all backlashes.

Round Dance is a piece that deals with the Washington Redskins logo. I thought that the football huddle resembled a round dance, and that it would be interesting to draw a parallel between the welcoming, celebratory nature of the round dance and the derogatory nature of the term “Redskin” and the logo for a national football franchise. As indigenous people, we are always mindful of paying respect to the original inhabitants of the land that we’re on, so I-Witness Culture—Eagle Dancer (opposite) is about the time-honored beauty and power of the eagle dance, and how it’s shared with the public through dance demonstrations.

Those paintings are larger works. Although I’ve completed several monumental murals in the past few years, my standard work size was between 12-by-12 inches and 40-by-30 inches. But last January, my work was exhibited at the LA Art Show, and I was inspired by the large scale of much of the art on display. Since then, I increased my standard canvas size to 48-by-48 inches.

Working on larger paintings is more of a physical experience—it’s not just arm, wrist, brush. I noticed that it took my entire body to navigate the canvas. I physically relate to larger work differently. I find that it’s liberating in that I’m able to deal with more possibilities when it comes to subject matter. It also makes me more conscious of the way the elements work together in the composition.

It’s very difficult for an artist to get out of the way of their own work. So many artists are locked into their “style” and what galleries and collectors demand of them, and they don’t give themselves room to improve or evolve. I make it very clear to whoever represents me that what I’m painting today may not be what I’m painting in a year or five years. Making art in the same style indefinitely would bore me. If it’s not interesting for me, how can I expect anyone else to engage?

By and large, contemporary Native art is marginalized in the national and international modern art lexicon, relegated to “craft” or “kitsch.” Granted, there are a few that have broken through, usually by recontextualizing an established look with dashes of indigenous aesthetics. My goal has always been to circumvent that conversation. Over the years my work has continued to garner the respect and interest of curators and writers while not conforming to the demands of the buying market.

As co-curator of this exhibit, I’m involved in every stage of the show. There is a lot at stake. There’s nothing more disheartening than going to a show or reading accompanying text, and realizing the curator has somehow missed what you thought you were telling them. My role speaks volumes about MIAC’s confidence in me and my work. It tells me that ultimately, they trust my vision.

Frank Buffalo Hyde (Onondaga/Nez Perce) lives in Santa Fe. His work is in the permanent collections of the National Museum of the American Indian, the Smithsonian, and numerous corporate and private collections, and has been shown internationally and in major US cities. Learn more at frankbuffalohyde.com.