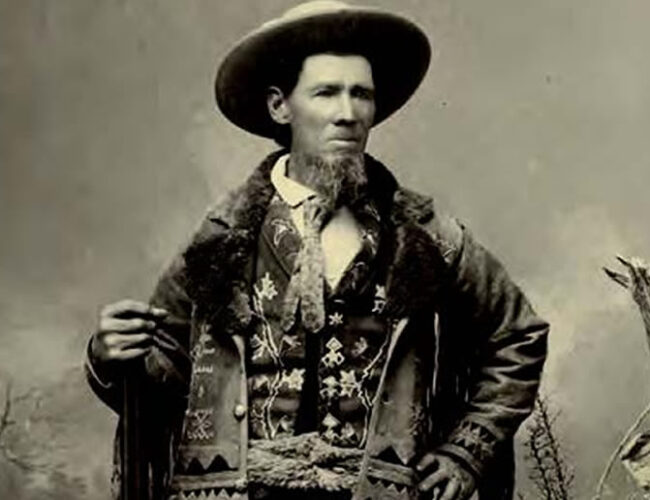 In 1865, New York Tribune editor Horace Greeley famously urged, “Go West, young man, and grow up with the country.” The imperative suggested economic opportunity, and indeed boundless opportunities greeted the young men and women who struck out on wagon trains and horseback to make their fortunes in the West. But the young, restless, and unemployed also saw the opportunity as a chance to reinvent themselves by tossing off Eastern conventions.

One means of reinvention was to adopt a fresh sartorial statement. Men especially indulged their fantasies by cultivating unconventional modes of dress. Meet one such fellow: Nicholas Riddle. This photograph, taken in Santa Fe, is a prime example. Shot on a studio set, reminiscent of today’s photo studios at fairs where you can dress up as a cowboy or a princess, Riddle presents his unabashed fashion flair in a composite ensemble perhaps provided by the studio. Not functional daily wear, and clearly assembled for the occasion, Riddle’s costume draws on a hodgepodge of influences, from what appear to be Plains and Great Lakes Native American embroidery and beading patterns, mountain man attire, and adventure garb fit for Western mountains and deserts. We don’t know much about Riddle—his surname itself suggests as much—and questionable notations on the photograph don’t help. The front of the photo is dated 1843, but the back bears the date 1873, along with a note indicating that Riddle was a participant in something called the 1835 Taos Revolt. However, the Taos Revolt was in 1847, and the Revolt of 1837, also known as the Chimayó Rebellion, adds to the mystery. While the studio props hint at the a fur trapper profession (notice the leg hold traps on the tree stump), Riddle’s outfit is too fancy to wear while dislodging some unfortunate creature from a trap. The less romantic view holds that this outfit was for special occasions or a one-time photographic fantasy, and that Riddle held a humdrum office job. In any case, when it came to posterity, Mr. Riddle dressed for success.