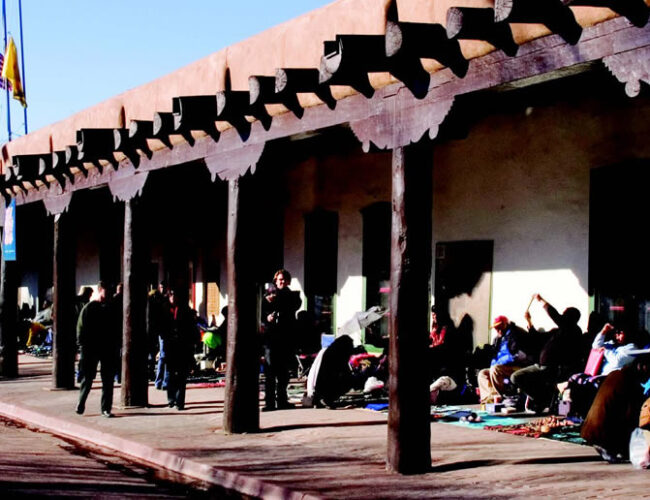 A contemporary view of the Palace of the Governors. Courtesy DCA.

I can stand outside of the Udall Building, throw a rock, and hit Old Santa Fe Trail (and hopefully not someone’s car in the process). That’s how close my office and my orientation are to this end of it. But in the spirit of 2017, a very disorienting year so far, this issue offers multiple doses of the good kind of disorientation.

The Santa Fe Trail stretches from northern New Mexico to Saint Louis, or Saint Louis to New Mexico, depending on your perspective. Frances Levine’s perspective flipped when she moved from Santa Fe to Saint Louis, and she discusses how travels to Santa Fe influenced Saint Louisians and opened up new avenues of cultural exchange with the Southwest in “Trading Places.” Frank Buffalo Hyde, whom we know as a painter with a new show at MIAC, studied writing during his time at IAIA and so put on a writer’s hat to talk about what inspires him. In our article on tramp art, you may be surprised to learn that the art was not actually made by tramps. There are more examples; I’ll let you discover them.

In the continuing saga of the synchronicity that pleasantly hounds me at El Palacio, last fall, Laura and I, our two kids, and two dogs drove back and forth from Santa Fe to Saint Louis to spend Thanksgiving with Laura’s family. I began editing Levine’s story in September, which gave me the gift of seeing our two-day road trip, which followed the old route, through a historical lens. We weren’t exactly roughing it as we stagecoached up the trail in our rented Suburban, kids cosseted by their computers and tablets, looking forward to a comfortable hotel stay in Wichita. We did snack on beef jerky, which sustained many an 1800s traveler.

As we passed Point of Rocks, near Springer, New Mexico, I held forth about the popular Santa Fe Trail stopover for caravans traveling the mountain route. A natural spring drew travelers to this mesa on the Gaines Ranch, and this source of renewal endures along with wagon ruts, tipi rings, and eleven unmarked graves that testify to the site’s significance.

I recalled Levine’s words as we covered the distance on two-lane highways. We saw this unfold in reverse order. “The trail links vastly different regions. It begins in Missouri, near the lush confluence of the Mississippi and Missouri river drainages. That landscape gives way to the Great Plains in Kansas and Oklahoma, then gradually to the high desert and Rocky Mountains at the western end of the trail in northern New Mexico.” We weren’t set upon by highway bandits, if you don’t count the speed trap in Meade, Kansas.

We made a detour to Lawrence, Kansas, to visit KU, Laura’s alma mater, and saw Blue Mound, a landmark hill that once guided Fort Leavenworth–based travelers toward the trail. Once we pulled up to Laura’s parents’ house, we received a warm welcome, and they received a rambunctious one from the dogs, who eagerly explored the back yard, cataloguing all of the scents left by deer who glide through the property, following ancient paths of their own.

Disorientation didn’t end on Thanksgiving, where I had tasked myself with conjuring up a full meal for ten in an unfamiliar kitchen. But with three sous-chefs—my mother-in-law Lenene, Laura, and my daughter Honorée—and mashed potatoes and pie from Laura’s brother’s family, everything came together beautifully. As in, the turkey was done two hours early, and I burned myself on the wrist, and the sit-down target time kept changing, and the Trader Joe’s gingerbread turkey centerpiece looked nothing like the picture on the box… and it was all worth it, every single mile.