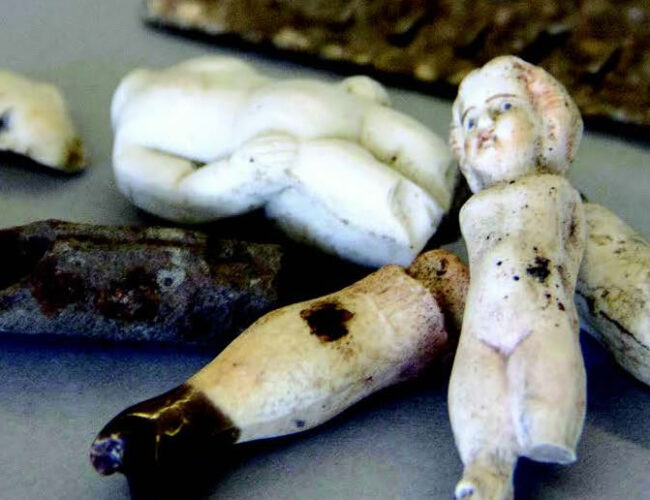 Broken doll parts, a rusted skate key, and a harmonica reed were among some of the toys collected from the Hotel China site in San Miguel County, New Mexico. Photographs by Chelsea Dollar.

Although toys are frequently part of the archaeological record, they are rarely a major part of archaeological museum collections. Only the best examples of toys make their way into exhibits, leaving the doll fragments and Lego-esque parts uninvestigated and undisplayed.

However, with the growing popularity of the archaeology of childhood, there is increased interest in these odds, ends, and creepy doll fragments. In these photographs, you’ll see some of the toys of the Archaeological Research Collections (ARC) at the Museum of Indian Arts and Culture. They demonstrate the myriad ways that children’s lives are present in the archaeological record here in New Mexico. Toys recovered from eleven archaeological sites, from forts to private residences, have come to find a home at the ARC.

Such items, when studied within the context of history and the museum collections that they have become a part of, help us to understand the lives of children. They show us what items were available to children of different classes, where children were playing, and what objects were part of their lives. A varied sample of these items gets lost and is recovered by archaeologists, who find both expensive and inexpensive, rare and common toys during excavation and survey. These differences demonstrate the variation in the lives of children within the area being investigated and, depending on the item found, can give us insight into the ways that adults conceived of childhood. They show us what behaviors and items were associated with children throughout history within a particular community.

The greatest number of toys were found at the Alexander McSween House in Lincoln County and Hotel China in San Miguel County.

The discovery of toys at the Alexander McSween House (pictured on page 69) is not surprising, since it was a private residence, but those familiar with New Mexico history will note that this particular home was burned to the ground during the Lincoln County War, on July 19, 1878. While history focuses on Billy the Kid, Jim French, Tom O’Folliard, José Chávez y Chávez, and Alexander McSween, who exchanged gunfire with Sheriff George Peppin and his men, the presence of toys in this home suggests children may have been regularly on the premises and possibly during the Lincoln County War. Yet the children these toys belonged to are not mentioned in historical accounts of that event.

It seems more plausible, especially to parents of today, that toys would be found at the former Hotel China site (pictured above) than at the infamous McSween House. Traveling can be busy and stressful; it’s easy for kids to lose things along the way.

Interestingly, not all of the toys in the collection were found near places of residence. A number of toys were recovered alongside NM 25, near Las Vegas, New Mexico, prior to the expansion of the highway. Five broken doll parts, two broken metal wheels, a metal model plane, a broken toy horse, a metal toy car, a metal bicycle seat, and a metal figurine evoke family road trips with scenic stops along the roadside for a picnic, or a toy part thrown from the car window by a sibling.

Breakage, misplacement, loss, and disposal are part of the life cycle of any toy. The MIAC collection allows us to remember the relationships we had with such items and reminds us that these objects are not truly lost. In the archaeological record, they take on new meaning, demonstrating and coloring the lives of the children they once belonged to. Over time, as more sites are investigated, MIAC’s ARC assemblage of toys will grow, and with more discoveries, future archaeologists will be able to delve deeper into what it was like to grow up—in the past—in New Mexico.