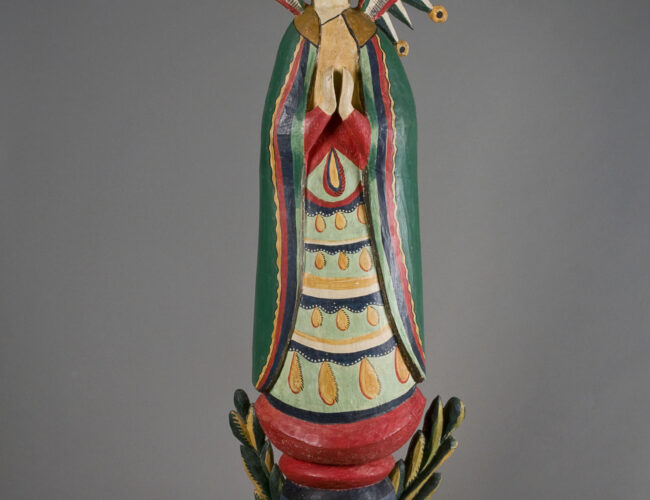 Sculptor Juan Amadeo Sanchez carved this bulto of Nuestra Senora de la Luz in the late 1930s. It is one of more than one hundred he completed as part of a program supported by the Federal Art Project. On display in the History Museum’s main exhibit, Telling New Mexico: Stories from Then and Now. History Collection NMHM, DCA, 10752/45 Courtesy Fine Arts Program, Public Buildings Service, US General Services Administration. Commissioned through the New Deal art projects. Photograph by Blair Clark, New Mexico Department of Cultural Affairs.

I loved field trips as a kid, but as a mother, I have to say that the permission slips alone fill me with guilt. I have a full-time job, and field trips inconveniently happen when I’m expected to be in my office. Once, a holiday from work gave me the leeway to accompany my daughter to the Genoveva Chavez Center with her grade.

Luckily, that happened before she became a teenager and I became a font of embarrassment. Her almost-overnight embodiment of autonomy and sophistication taught me that there is a window to these things.

And so I was thrilled to find out that my son’s last field trip of sixth grade would take place at the New Mexico History Museum. It’s my job to be conversant with what’s going on at DCA museums and historic sites, so it would clearly be a twain-meeting moment. I could excel at parenthood and career, simultaneously. And Nathaniel, 13 years old as of April, was low-key happy, if not ecstatic, that I would be a chaperone.

The teacher assigned me to my group of students; we would be competing against other groups to get the most answers to a scavenger hunt-style list of questions. Melanie LaBorwit, who works in NMHM’s education department, gave us a gracious welcome and covered ground rules, including “Make sure when you get on the school bus afterwards, that you recognize the kids on the bus.” Apparently, one kid had recently ended up leaving the premises on the wrong school’s bus.

What a tender age. Gangly limbs, braces, shortish boys, tallish girls. The pressure to be cool fighting with the urge to express glee. The impulse to self-isolate, or cling to your best friend, or to fall into comfortable but limiting social formations. The pose of boredom vs. the thrill of discovery.

I am here to tell you that this field trip morning at the History Museum blew all of that to bits. Teams had to use teamwork. We strategized about how to glean the most information in the least time, covering two floors and a mezzanine of the museum, roving through the Palace of the Governors, and even ducking into the fabled Print Shop, where I got to (hurriedly) meet Tom Leech face to face, although we’d previously communicated via email.

The kids learned about the history of bultos and retablos, the importance of the VW bus in New Mexico’s counterculture history, and lots of other integral bits of their state’s culture. As the deadline approached, we scrabbled after as many last-minute answers as we could, arriving back in the lobby breathless and glowing with camaraderie. I enjoyed strengthening my own grasp on New Mexico history in such an ebullient way. I also rediscovered that I’m extremely competitive when it comes to nerdy stuff, something I haven’t had occasion to notice since my high school Mentathlon meets.

Afterwards, we had lunch at Furr’s Family Dining, where my education continued as I learned that the passel of boys in front of me could in fact roughhouse nonstop the whole time we waited in line, and only step on some innocent bystander’s foot every once in a while; as I asked what this or that mysterious dish was in the cafeteria line steam table; and, as I found that I’m not a fan of fried okra (at least not Furr’s iteration).

The teacher tallied the answers and I was (probably overly) stoked to find out that our team tied with another team for the top score. The prize: a doughnut party. I asked the teacher if they needed a chaperone, but my son gave me a very teenager look and that was the end of that. You’re either on the bus or off the bus, as Ken Kesey said, to which Melanie LaBorwit could add, “or on the wrong bus,” and it was clearly time for me to go back to my office, where I luckily never have to stop learning about New Mexico’s museums and historic sites.