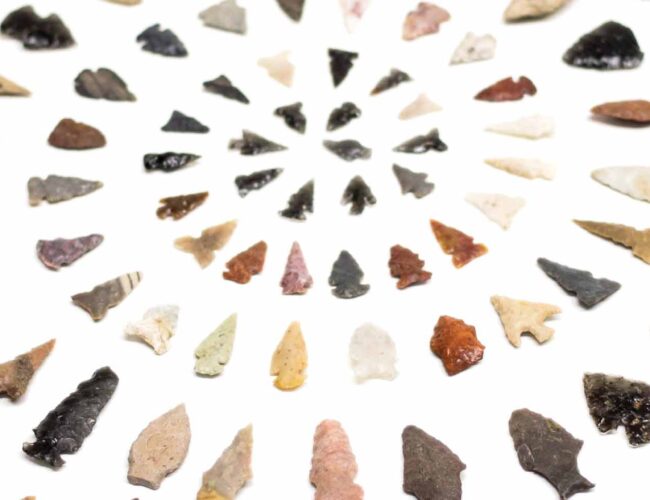 BY CHRIS CREWS AND C.L. KIEFFER

Saturday, October 21 is International Archaeology Day. For the past few years the Department of Cultural Affairs has celebrated this day with an open house from 10 a.m. to 4 p.m. at the Center for New Mexico Archaeology (CNMA). Last year, the focus was on maize, and this year, projectile points are in the spotlight.

On International Archaeology Day, CNMA will unveil Points Through Time. Overall, the goal of the exhibit is to convey to the public the valuable information that a single projectile point has to offer archaeologists when it is found and recorded in place. The goal is not only to provide fascinating learning opportunities, but also to encourage people to take a picture—and not take a point—when they come across them. The exhibit highlights the changes that have occurred to projectile points here in New Mexico from the Paleoindian Period (12,000–8,500 BCE) into historic times. It also highlights the variety of projectile points in the Individually Cataloged Collection (ICC) at the Museum of Indian Arts and Culture (MIAC), which includes some of the earliest finds in New Mexico. The collection contains thousands of individual projectile points, from large spear points to tiny arrowheads

The facility includes the Office of Archaeological Studies and MIAC’s Archaeological Research Collections (ARC), which house artifacts from federal, state, tribal, and private lands collected during archaeological projects conducted primarily in New Mexico. Alongside ceramics, faunal, and floral remains, a treasure trove of individually curated projectile points spans the entire amount of time that humans have lived in this area. Visitors will also be able to scrutinize maps showing where in the state each point type can be found. Hands-on activities include photo documentation, recording location information, and training in type identification.

What Are Typologies?
Archaeologists use typologies to classify various forms of artifacts and to provide general descriptions of them with minimal words. In order to organize the projectile points collection for exhibition, a vast majority of them needed to be typed. This method of systematic, typological organization enables the study of artifacts that share similar characteristics. For example, ceramics can be typed based on form, decoration, and production. Basketry can be typed based on weave and form. Projectile points are typed primarily on size and shape.

These typologies become useful when other forms of dating techniques are unavailable. Seventeenth-century Danish geologist Nicolaus Steno’s Law of Stratigraphy states that items found lower in the ground will be older than those found higher. Because of this principle, archaeologists can estimate a range of time a site may have been occupied based upon established date ranges for specific typologies. This is especially useful when no archaeological items are available for absolute dating techniques (i.e. radiocarbon and thermoluminescence). For instance, if someone finds a Jay point at the site, they know that they are dealing with an early Archaic site. On the other hand, if a Pueblo Side Notched point is found, one can be certain that they are dealing with a Pueblo aged site between 700 and 500 years old.

In the 1960s, Cynthia Irwin-Williams created one of the earliest typologies of projectile points for the Southwest prehistoric periods. The types she created included the Jay (5,500–4,800 BCE), Bajada (4,800–3,200 BCE), San Jose/Armijo (3,200–800 BCE), En Medio (800 BCE–400 CE), and Trujillo (400–600 CE) cultural phases. Each cultural phase is associated with a particular type of projectile point. Many of these types are still titled the same today, though their definitions have been clarified.

As archaeologists have collected more information, the typology of projectile points has evolved. In 2002, Noel Justice created one of the largest typologies, which encompasses the entire North American Southwest as well as the rest of the continental United States. He used some of the types introduced by Irwin-Williams, including Bajada and San Jose. Others he renamed, having either split a type into multiple types, or the reverse, merged multiple types into one.

How Are Points Typed?
After size, the portions of the point that are of primary interest are the base and stem where the point was hafted to the arrow or spear shaft. The tips of points are not useful in typing due to the limited ways one can make something pointy while still allowing it to fly through the air properly.

Size coincides with the technology used to throw/project the point. Earliest points, including Clovis (13,500–13,000 BCE), are large. These were used as spear points for thrusting or throwing at prey. Points get smaller throughout the Archaic period due in part to changes in hafting and available resources. Around 1,600–1,500 years ago, the size of points declined greatly. At this time, points went from up to 30 centimeters
in length to as small as less than one centimeter. Archaeologists believe that this coincides with the introduction of the bow and arrow to the area. Simply put, large spear points would not fly very far if launched from an arrow, so the people made their points smaller.

Bases of points are useful in determining their type. There are three general types of bases: plain with no defined hafting area, stemmed with shoulders demarcating the break between base and blade, and notched from the bottom or corner to create a hafting element.

Further observations that can be made on points include cross sections (thickness and shape). In the Southwest, earlier points were often made to be thicker than later points. This is indicative of how differing knapping practices create different shapes. Another avenue is the shoulder of the point going from weak (barely recognizable) as in Jay points, to barbed (pointed) as in most San Pedro points.

The size and shape of a point’s blade should only be used as a last resort when typing projectile points, when no hafting element is present, because data pertaining to the blade is not as definitive as other characteristics. There are some differences, though. Some points have straight sides, some have convex sides creating a leaf or lanceolate shape, still others have blades with concave edges, as in most Dolores cluster points.

The collection of projectile points spans every period of human occupation in New Mexico, from large Clovis and Scottsbluff points to tiny Chaco Corner Notched and Pueblo Side Notched points. San Pedro points dominated the Archaic aged points in the collection, while Dolores Straight and Expanding stems were the most popular in the early Puebloan times. The most popular younger points were Pueblo Side Notched with either concave or convex bases.

One of the intriguing aspects of this typology project is the discovery of points that are not commonly found within the state: point types such as Excelsior (commonly found in California), Pedernales (commonly found in Texas), and Elko (typically found in the Great Basin). The presence of foreign or exotic projectile points could show many different aspects of prehistoric life in what we call New Mexico today. This could be indicative of trade between groups within the modern border and those outside. It could also signal movement of hunter-gatherer peoples as they searched for sustenance, their mobile lifeway bringing them here if only for a brief time. Regardless of the method, these exotic points show a much larger network of peoples in the area than archaeologists previously thought.

Many of the points discussed in this article will be on display in the lobby of the CNMA in the new exhibit Points Though Time, which will be up until early October 2018. If you are unable to make it on October 21, the lobby is open weekdays between 8 a.m. and 5 p.m. (excluding state and federal holidays).

Chris Crews is a doctoral candidate in anthropology specializing in Hunters and Gathers of New Mexico at Texas A&M University and currently volunteers with the ARC at CNMA. C. L. Kieffer is the collections manager for the Archaeological Research Collections at the Museum of Indian Arts and Culture. She is also a doctoral candidate in anthropology and a graduate student in museum studies at the University of New Mexico.