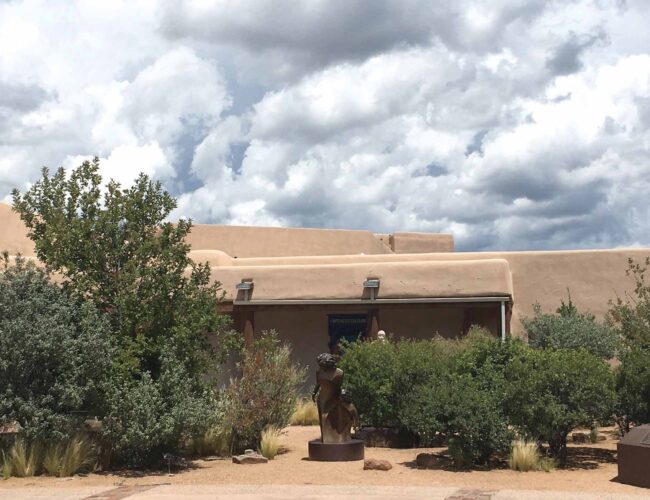 The Museum of Indian Arts and Culture today. Photograph by Shelley Thompson.

All are invited to MIAC’s thirtieth birthday at Museum Hill Community Day on Sunday, September 24, 10 a.m.–4 p.m. The celebration will include birthday cake, storytelling, and children’s art activities. In MIAC’s theater, an Indian Advisory Panel discussion (1–2:30 p.m.) will focus on the importance of Native input in American Indian museum collections and exhibitions, followed by a panel (3–4:30 p.m.) featuring some of MIAC’s former directors discussing the highlights of their time at the museum.

To commemorate MIAC’s three decades, El Palacio asked past and present museum directors to share their favorite stories about MIAC and to talk about their accomplishments, hopes for MIAC’s future, and more.

What does MIAC stand for to you, and what special role does it play in telling the story of indigenous art and culture in the U.S.?

Della Warrior: MIAC has played a leadership role in advocating the engagement of indigenous people in museums with prominent and notable collections of artifacts, art, and other forms of material culture. For far too long, with the exception of tribal museums, the voices of Native people were not included in exhibits or in stories presented about them. Their voices were not sought out or listened to. We are in a new era: an era where Native voices are sought out for their interpretations and perspectives. This has been a turnaround, and MIAC has played a pivotal role in setting this direction. As the director, it is my great honor to ensure that MIAC continues to expand this tradition.

What do you consider your most significant accomplishment while serving as director of MIAC?

Stephen Becker: I consider our work on repatriation to be one of our greatest accomplishments. At the time, the idea of museums returning burials, grave items, and religious objects to Indian tribes was very controversial. Nationally, there was a lot of resistance, but MIAC and Museum of New Mexico were not only in favor of the process, we led it. NAGPRA, the Native American Graves Protection and Repatriation Act, was very new [enacted in 1990], and the Museum of New Mexico Director Tom Livesay had asked us to put together our own cultural sensitivity policy, one of the first anywhere. We didn’t have human remains in our collections, but we did have religious and burial objects. Our chief curator, Bruce Bernstein, led the effort to create what I believe was one of the first special sacred and religious objects storage vaults, a place to set apart those cultural items the tribes felt were best left in our care but kept away from public view. It was a model for museums around the country. Another very special thing was how our curator of ethnology, Edmund Ladd, a member of Zuni Pueblo, arranged for the Laboratory of Anthropology/MIAC to be a neutral meeting place for the return of stolen Zuni War Gods, called Ahayu:da, on their way back to Zuni Pueblo from different museums around the country. Those were very meaningful and quiet occasions with religious elders who performed cleansing ceremonies required before bringing the items back home to the Pueblo. A few of us on the museum staff were asked to witness the ceremonies, which was quite an honor.

What is MIAC’s single most impressive artifact or artwork, and why?

John Ware: Two ollas [ceramic jars] at MIAC manufactured probably in 1917 or 1918 represent some of the first experiments that Maria Martinez did with black-on-black pottery, according to Kenneth Chapman, who put together the Indian Arts collections. And then she went on to develop that technique and refine it. Those were part of our opening exhibit, Treasures of the Laboratory of Anthropology.

Duane Anderson: For me, the most impressive piece at MIAC is the large sculpture, Apache Mountain Spirit Dancer, in front of the museum, by Craig Dan Goseyun (San Carlos Eastern White Mountain Apache). It’s a focal point for MIAC visitors on Milner Plaza, and a statement of the museum’s identity.

What was the most surprising thing you encountered while working
at MIAC?

Duane Anderson: More than one-seventh of the artifacts in the State Archaeological Repository were damaged by water and humidity after a big flood in the basement of the Rivera Building in 2004—now the Drury Plaza hotel. This disaster led to the development of the Center for New Mexico Archaeology, where artifacts are properly curated and stored.

Della Warrior: I’m always surprised by the limited knowledge that our vast number of visitors have about Native American people. They don’t know that there are 367 tribes and more than 300 Alaskan villages. It is surprising that so many people think Native people are extinct and that they all lived, or live, in tipis. It is even more astonishing that many New Mexico residents are not aware that there are twenty-four Pueblos and tribes in New Mexico. MIAC is the place to provide this education—who are the indigenous people in New Mexico, how did they survive, and how do they live today?

What do you most wish for MIAC in the future?

Bruce Bernstein: Della Warrior and Marla Redcorn-Miller, MIAC’s deputy director, are already in the process of updating the long-term exhibit, Here, Now and Always, and carrying it out in a manner that is forward-thinking and in keeping with the original intent of the project as a collaborative and inclusive endeavor. The original exhibit was a multi-year project involving many co-curators from Native communities in the state and was one of the first of its kind when it opened in 1997. I believe MIAC will continue to be a leader in inclusive museum practices.

What is your favorite memory from the time you spent at MIAC?

John Ware: The curators I hired to do the Treasures of the Laboratory of Anthropology exhibit were some of the best people I’ve ever worked with: Stewart Peckham, Rick Dillingham, Nancy Fox, Kate Peck Kent, and Bud Whiteford. We had the best advisors and mentors that you can imagine; people like Rina Swentzell and Dave Warren, both from Santa Clara Pueblo, who were leading us the whole time in the planning process, and curators such as Edmund Ladd from Zuni Pueblo, who developed the Here, Now and Always exhibit storyline.

Bruce Bernstein and I had met a wonderful person, Charmay Allred, who had worked with the Southwest Museum’s friends group. Charmay rounded up a great bunch of people to get us started, and the friends group grew really fast—sometimes their events overflowed the MIAC auditorium. The Friends of Indian Art became a great way to involve members with lectures, special events, and tours of artists’ studios. It continues to build wonderful relationships with people who become donors, and raise funds to purchase contemporary art. It also raised the matching funds for our first National Endowment for the Arts grant.

Bruce Bernstein: We added 1,000 pieces to the collection while I was there, including about 300 pieces from Dorothy Dunn’s classrooms at the Santa Fe Indian School. We worked with her daughter, Ethel Kramer, and when I asked her where were the journals and papers her mother refers to in her book, she took her time in answering, making sure that she wanted to share that information with me. Finally, at her house, she moved away a cat litter box in front of a bathroom cabinet so we could access the cabinet—and inside were all her mother’s papers from her classrooms. Those materials are among the most used materials in the archive.

Della Warrior: I have a lot of great memories, but the most memorable is the meeting we had with Disney Imagineering planning our upcoming MIAC exhibit. We’re going to collaborate with the National Museum of the American Indian to present an exhibit in 2018 at the Epcot Center in Orlando. To me, that represents a major step forward for MIAC, because fourteen million people see the Epcot exhibit annually. We had a fun day planning the exhibit, focusing on what we’re going to share with the visitors.

Archaeologist John Ware served as MIAC’s first director from 1986 to 1989. He was executive director of the Amerind Foundation in Arizona from 2001 until his retirement in 2014. He lives in Santa Fe.

Bruce Bernstein, a leading authority on Southwest Native arts, directed MIAC from 1994 to 1997. He is presently executive director of the Ralph T. Coe Foundation for the Arts, and is Historic Preservation Officer for the Pueblo of Pojoaque.

Anthropologist Duane Anderson was MIAC’s director from 2000 to 2005, after serving as vice president and director of the School of American Research’s Indian Arts Research Center. Retired, he lives in Santa Fe.

Shelby Tisdale served as MIAC’s director from 2005 to 2012; prior to this she was the director of the Millicent Rogers Museum in Taos. She is the current director of the Center of Southwest Studies at Fort Lewis College in Durango, Colorado.

Current director Della Warrior stepped into the role in 2013, after serving as president of the Institute of American Indian Arts in Santa Fe. She is the chairperson of the Otoe-Missouria tribe, of which she is a member.

Lynn Cline is the Santa Fe author of the award-winning The Maverick Cookbook: Iconic Recipes. Her travel guide, Romantic Santa Fe, will be published this fall.