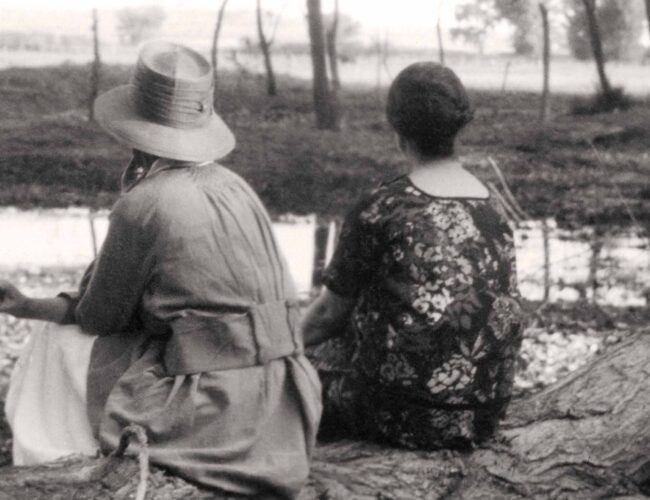 BY MARIE MARKESTEYN WITH CANDACE WALSH

I truly believe that nobody ever really owns Los Luceros, but they might get their name on a piece of paper for a while. My own relationship with Los Luceros is a long and storied one, although I was never an owner. I am, however, a storyteller, and the stories are unending over there.

I’m originally from Savannah, Georgia. My friend Jim Williams, the subject of the book Midnight in the Garden of Good and Evil, got me interested and involved in historic preservation. In 1978, I came to New Mexico with Dan, the man who would become my husband.

We moved to the Dixon area in 1979. His family goes back to the 1800s, in Tierra Amarilla. The house that is now Three Ravens Coffee House, and the house next to it, were built by Dan’s ancestors in 1885.

We went to see some of his relatives in the Española Valley soon after our move, and his aunt’s husband’s sister, Grace, told me that she had something to show me. She took me on a walk to Los Luceros. That’s when I first learned that Los Luceros, no matter who the owner happens to be, belongs to the community, and it goes against tradition to keep its community from respectfully enjoying the grounds.

As I stood in front of Casa Grande, my first thought was, “There’s a Southern mansion right here in New Mexico, made out of mud!” Then I noticed that it was empty, and had been vandalized. The carved wooden bancos in the grand sala had been ripped out. The sundial had been taken from the lawn. It had no functioning electricity or running water. Some of the windows were broken.

We decided to find out who owned it. It was, coincidentally, a man who had gone to law school with Dan.

He asked, “Would you be interested in living here until we sell it?”

I told him, “Well, you can come and see me here, because I’m moving in.” He eventually came around; we moved into Casa Grande in 1980, after working out the details. He never regretted it.

At the time, I was studying at the College of Santa Fe, and working in its career development office. One of my responsibilities was to help former prisoners, who had taken college classes while in the penitentiary, find jobs after they were released. I asked three or four of them to help Dan and me with the restoration. We put new linoleum down in the kitchen, replaced the broken glass, and got the water and electricity running.

My time living there was one of the most incredible periods of my life. I’ve lived in the community ever since, for almost forty years, and I’ve gotten to know a lot of the local people. At least once a week, if not more, somebody would come by and talk with me about the history they had experienced there. I wish I had written more of their stories down. But I’ll share the ones I did capture.

Many of the stories I have learned came from becoming a permanent resident of Los Luceros and continuing to be involved with it. For years, I gave tours, telling Los Luceros’ stories to visitors. But I think it’s still one of the best-kept secrets in New Mexico. A lot of the people I met who live in this area, outside of the descendants, didn’t even know it was there. When it sold, I bought property adjacent to Los Luceros, a section that used to be part of it. The apple trees on my property are very old. Some date back at least 100 years. It is reported that the very first fruit orchard dating back to Spanish times was here—Romes, Jonathans, and more recent Red and Golden Delicious apples. I was so sad when my Pippin apple tree died—it was ancient. The man who helps me with the property now, his godparents were the Montoyas, who were the first caretakers for Mary Cabot Wheelwright.

I interviewed Bernie Montoya, the youngest of the Montoyas’ children, when she was in her eighties or nineties, not long before she died. The Montoyas lived in the little Victorian house on the property. It was built by Abel Lucero in 1902 when his father Lucas gave him a piece of land.

Bernie was Mary’s favorite, the only one Mary would allow to clean the upstairs as a twelve-year-old girl, or to be in the house when her friend Hostiin Klah [the noted Navajo artist, singer, and medicine man] was there. Bernie said that Mary, Hostiin, and Mary’s cousin Lucy each had their own drum, and they would play their drums together by the hour.

When Bernie’s father became crippled by arthritis, Mary sent him back East to get more advanced treatment than was available in New Mexico, but nothing helped. Mary also took Bernie and Hostiin out to Maine, to stay on an island where she had a house. Neither of them had seen the ocean before. Bernie lived with Mary in the main house and Hostiin lived in the boathouse for several months.

Women came out here and found freedom they never had back East. Mary first discovered Los Luceros when she traveled to San Gabriel Dude Ranch to ride horses. Joe and Mildred Posey worked at San Gabriel Dude Ranch, and she met Mildred there. Mary fell in love with the area and bought Los Luceros. After Mr. Montoya could no longer take care of the ranch for Mary because of crippling arthritis the Poseys came there to work for her in that capacity. Joe was a wrangler and ranch hand, and Mildred did many things. Part of the Montoya family remained in the Abel Lucero house, and continued to work there. Joe and Mildred lived in the Casa Grande.

Gilbert Vigil, whose father Max took care of her horses, told me how Mary and Lucy used to set out from Casa Grande and ride all the way to Truchas and camp out. Her longest horseback ride was 500 miles. She traveled with an entourage of wranglers. When she got older, she’d still go on long rides, but she’d take the train back and let the wranglers ride back with the horses. No matter where they were riding, at 4 p.m. she made sure that they stopped to build a fire and have tea.

Mary was never interested in farming, so eventually she hired Maria Chabot to be the foreman of the ranch. Chabot first met Mary when Chabot, at age nineteen, was hired by the WPA to photograph territorial architecture in New Mexico. She came to the Casa Grande, knocked on the door, and asked permission. They became friends. Mary had an interest in photography, too. When the locals found out that Mary could take photos, they would ask her to come and take pictures of their relatives’ corpses after they died.

At one point, Chabot was working for both Georgia O’Keeffe, overseeing the restoration of her house in Abiquiú, and Mary Cabot Wheelwright. For the longest time, neither one of those women knew that Maria was working for both of them. Chabot worked with the men, on the tractor, in the fields. She lived with a woman friend in a house just across the road from the Casa Grande. But when Mary was at Los Luceros, she insisted that Maria move into Casa Grande while she was there.

After Chabot inherited Los Luceros, she sold it to Charles and Nina Collier in the early 1960s. Juan Martinez and his wife Frances worked for them. Charles was very eccentric, and Nina was beloved by the whole community. Juan has since died, but he told me that he and Charles dug up graves inside the capilla (chapel), which had a dirt floor, because Charles was curious and wanted to see the remains. They put them back exactly where they were. Eliza and her husband, Luis Ortiz, were the last of the Luceros to own the estate (Luis’s mother was a Lucero), and they were buried in front of the altar, one on top of the other. In one of the corners, there are two more graves. There are other graves in there also. Mr. Collier put concrete on top of the graves after that. If Juan hadn’t told me that he saw those graves, we wouldn’t know. There’s no documentation that they’re there.

That eerie recollection brings me to the ghost stories, which have their place in the lore. Nina Collier spoke often of seeing a female apparition on the stairs. The favorite local story is the judge that paces in the small room upstairs. I can share my own firsthand experiences. In Casa Grande, there are narrow stairs that go up to the roof—ship stairs built by Mary’s carpenter from Boston. About halfway up, there’s a trap door that goes into the space above the ceiling, just big enough for someone to slither in on their belly. Mr. Collier used to come by, and one time he did so to show us.

This time, Dan was standing in the low doorway in the grand sala, and I was on my way to the roof. The trap door popped out, spun like a Frisbee, and landed at Dan’s feet. Gravity wouldn’t do that. Recently I asked Dan if he still remembered that. (We are no longer married, but we are still friends.) He said, “I’d never forget that.”

My other story took place during a three-day 4th of July celebration we hosted at Los Luceros. We invited family and friends to bring tents and camp on the grounds.

I was on the front portal; my back was to the road. Suddenly something spun me around and without intention, I yelled, “Stop!” Four people stopped dead still in the road. A huge tree limb fell right in front of them. If they had gone another step. Something used me to save those people. I couldn’t speak for a while after that.

The most recent scary story I heard was this one: Some teen- agers were trying to open the gate to Los Luceros late at night. A ghost appeared to them from behind a large lilac bush. This woman in white appeared and said in a moaning voice, “You must leave!” I had to laugh. At the time, I was staying in the Abel Lucero house while my house was being remodeled. That was me, in my long white nightgown, fed up with their shenanigans.

I have been a collector of Los Luceros stories, and after all of these years, it pleases me that I figure in at least one.

For more on the history of Los Luceros, read Michael Miller’s, ‘The Secret Sanctuary.’