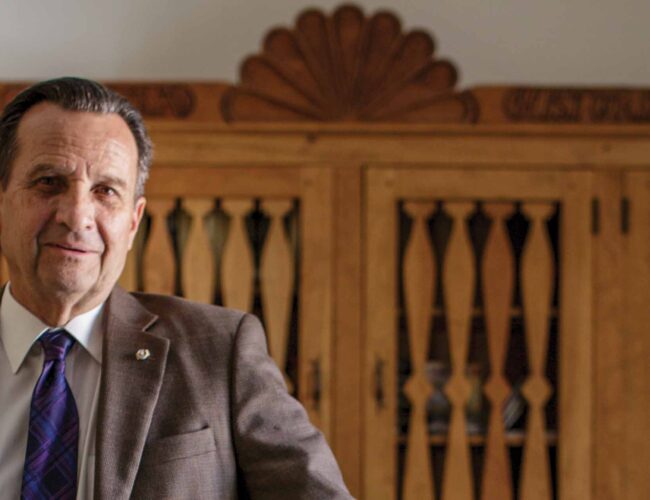 BY CAMILLE FLORES WITH PHOTOGRAPHS BY MINESH BACRANIA

Renowned historian Thomas E. Chávez is a grateful, if reluctant, cultural champion. When he learned last year that he’d been nominated to receive the highest civil award that Spain bestows on a foreigner, and that he was to be inducted into the Orden de Isabel la Católica at the rank of commander for his exceptional contributions to US–Spanish cultural relations, he demurred, and decided to withdraw his name from consideration.

The marriage of Isabella I of Castile to Ferdinand II of Aragon in 1469 launched a golden era in Spain. Under their royal watch and with the monarchs’ financial support, Christopher Columbus set sail, forever expanding the horizons of global encounter. Admission to the Order of Isabella the Catholic reinforces the value of that intercultural connection.

“I have already been rewarded for my work,” Chávez explains. “The respect of people I genuinely admire, a beautiful family, the colleagues with whom I’ve shared dreams as well as hard work, and the privilege of helping to recover some missing pieces of the American experience: these have been my rewards.

“I am blessed to have been born with a different perspective—to know that we as Americans have more than an Anglo-American heritage,” Chávez says. “That perspective naturally informs everything I do.”

Despite his protestations, some supporters would not accept his reaction. Spanish Consul General Enric Panés led a subtle campaign to change Chávez’s mind. Chávez says the two became good friends over lengthy telephone conversations between Albuquerque and Houston, Texas, where Panés lives in the United States. Finally, the historian from New Mexico relented.

On April 4, at the residence of the consul and his wife, Bice Rineri, Chávez graciously accepted the honors, as well as an elegant medal to drape from his neck, in view of fourteen invited guests.

“It was really something,” Chávez says. “To be there at the elegant home of my gracious hosts, and then to receive the medal and a citation signed by the King of Spain. What an experience!”

Still somewhat ambivalent about all that attention, Chávez is quick to point out that his new status as a member of the Orden de Isabel is not tantamount to the bestowal of knighthood in the British hierarchy. It is, rather, a public acknowledgement of efforts that have enhanced Spain’s relationship with the world. Here are some highlights.

Chávez, who holds a Ph.D. in history from the University of New Mexico, is a well-known author of ten books, a sought-after lecturer, a cultural advocate, and a consultant to several social and civil groups.

In December of 2004, Chávez retired as the executive director of the National Hispanic Cultural Center in Albuquerque, where he currently resides. Before that, he served as director of the Palace of the Governors in Santa Fe for twenty-one years, directing such cultural anchors as the Portal Program, which limits display and sales space under the portal at the Palace of the Governors to more than 1,000 verified Native American artisans. He also initiated Christmas at the Palace and the annual reenactment of Las Posadas, a musical drama that tells the story of Mary and Joseph’s search for a room in Bethlehem on the night of Jesus’ birth.

Significantly, Chávez directed the expansion and construction of the Palace’s Fray Angélico Chávez History Library and Photographic Archive. The now-deceased priest, poet, and advocate for preservation of Spanish Colonial heritage was Thomas’ beloved uncle and mentor. The priest, whom Tom addressed as Father rather than uncle, is a past recipient of the same Spanish award that his nephew just accepted.

The younger Chávez also played a pivotal role in the monumental mission of land acquisition, initial planning, and fundraising for the New Mexico History Museum that opened in 2009 behind the Palace of the Governors. He also helped the Museum of Spanish Colonial Art to begin an endowment.

His restoration efforts did not stop at the state borders. According to his website (thomasechavez.com), Chávez and his staff retrieved the Segesser Hide paintings from Switzerland [read the latest on that topic here: elpalacio.org/articles/fall16/hide.pdf]. They also organized the return from England of the Martínez de Montoya documents, which establish the founding of Santa Fe as early as 1607.

Thomas met his wife, Dr. Celia López-Chávez, while conducting research at the Archives of the Indies in Seville, Spain in 1987. They married in I992 and celebrate their twenty-fifth anniversary this year. Originally from San Juan, Argentina, López-Chávez received her Ph.D. in history and geography from the University of Seville. She recently retired as a full-time professor in the University of New Mexico’s Honors College. She has written three books, including her latest, titled Epics of Empire and Frontier: Alonso de Ercilla and Gaspar de Villagrá as Spanish Colonial Chroniclers.

La familia Chávez also includes two daughters from Thomas’ previous marriage. The oldest is Nicolasa Marie, the current curator of contemporary Latino/Hispano and Spanish Colonial Collections at the Museum of International Folk Art. She double-majored in Spanish language and history, and has a master’s degree in history from UNM. She performs and sings flamenco and Argentine tango. Her first book, The Spirit of Flamenco: From Spain to New Mexico, was published by the Museum of New Mexico Press in 2015.

Daughter Christel Angélica graduated from the US Air Force Academy and eventually was trained in Special Operations, flying C-130s at Kirtland Air Force Base in Albuquerque. On August 7, 2002, she and nine crew members were killed in a crash in Puerto Rico. She was 27 years old. “The first week of August every year, we join together for a ‘Memorial Christel Backpacking Trip,’” Chávez says.

The Spanish medal recognizes all Chávez has done so far, but he may qualify for a second one, given all that’s on his horizon. For Chávez, the immediate future centers on preservation efforts wherever he may be of service and the development of cultural tourism.

In November, Chávez is leading a group of about fourteen cultural tourists and scholars to Ecuador, where they’ll meet with community leaders in Cuenco and Oña to investigate and help develop a plan for the restoration and development of Oña, a historic mestizo village along the ancient Inca Trail that was founded by the infamous Spanish conquistador Francisco Pizarro in the 1500s. Chávez was invited to attend the hearings following a successful collaboration with similar goals in the Spanish city of Trujillo, where, incidentally, Pizarro was born.

Chávez will also resume work on an ongoing project related to documents and correspondence of Benjamin Franklin that have languished in several Spanish archives for centuries. These documents are from, to, and about this outspoken, colorful, and larger-than-life eighteenth-century founding father, who was a political figure both in the US and abroad. Chávez came upon this material as he conducted research for his book, Spain and the Independence of the United States: An Intrinsic Gift, published in 2002 and reprinted several times since. It presents an international view of the US struggle for self-rule.

Chávez has already identified at least six Franklin archives in Spain, and was surprised to learn that no Franklin biographer had ever reviewed this trove of source material. His first volume related to this trove is Doctor Franklin and Spain: The Unknown History, which was just published by Thomas Leech at the Palace Press. The Spanish ambassador to the United States is presenting edition number 6 (out of eighty) to the king of Spain, Felipe VI. He’s currently putting together a staff of translators and editors to compile and translate the writings and to turn them into a book slated for publication in the near future in the US, Spain, and possibly France. Perhaps Chávez will accomplish for Franklin what Lin-Manuel Miranda has for Alexander Hamilton.

For these and other tireless research efforts, Dr. Chávez received a Fulbright Research Fellowship to Spain in 1987.

Other less concrete but equally significant rewards of the lifestyle he has chosen include “getting to work and consult on a daily basis with like-minded, extremely creative  people.” When working as director of the Palace of the Governors, he reserved Friday afternoons for socializing in-house with staff. As they entered the workplace that morning, each employee donated a dollar or two to the food-and-beverage fund. Later, they’d all drop in to the boss’ office to talk, and to voice their dreams about what might be accomplished.

“I have been privileged to work with highly capable, imaginative people over the course of my life, and many of them were state employees. As I moved through the system, I seemed to go from one all-star team to another. They inspired me to attempt all sorts of things that eventually rankled the money crunchers and bureaucrats no end,” he laughs. “You wouldn’t believe how many seeds were planted during those sessions. How many dreams eventually bore fruit.”

Camille Flores is a career journalist and writer who lives in Santa Fe. She is the author of two books about New Mexico people and places, and is currently contemplating a third.