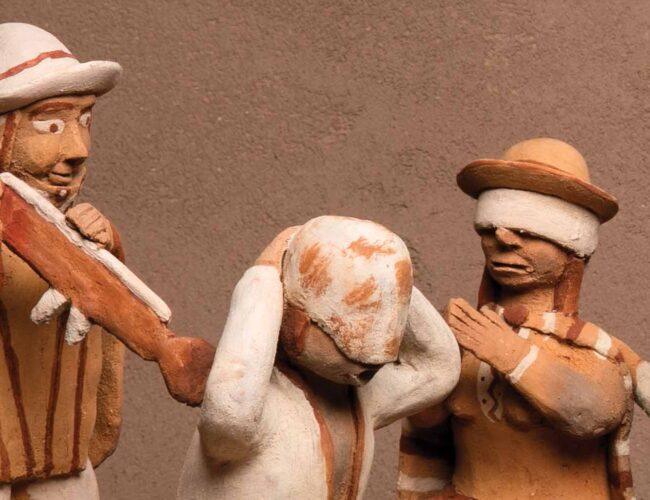 In 2003, Amy Groleau was doing archaeological field work as a graduate student in Ayacucho, Peru—a highlands city that many people associate with two very different national narratives. This region lies at the heart of Peruvian folk art, rich with roots in the pre-Columbian Wari culture and complex with the hybridity that resulted from colonial-era negotiations and violence. From 1980 to 2000, Ayacucho was also the epicenter of the country’s harrowing internal armed conflict, when the Maoist revolutionary movement, Sendero Luminoso (Shining Path), conducted guerrilla warfare against the Peruvian government, and the state retorted with an equally violent counterinsurgency. The local indigenous community suffered persecution from both Sendero Luminoso and the state military.

The phenomenon of los desaparecidos (the disappeared) took root during the late-twentieth century in various Latin American countries that endured civil wars, including Peru. The estimated number of deaths during Peru’s Time of Violence (this period’s understated name), is 70,000; depending upon which report you read, the number of desaparecidos ranged from 8,000 to 16,000. Indigenous villagers in Ayacucho and similar locales became collateral damage during the conflict, as Sendero insurgents forcefully attempted to coerce them to cooperate, while the state military captured and extra-judicially punished suspected rebels. Los desaparecidos were kidnapped, interrogated, tortured, and, in the end, almost always killed and buried. Images of women marching in the streets, demanding information about their missing loved ones, holding signs bearing their names and photos, remain as potent today as they were in the 1980s and 1990s. Beginning in 2002, the government began to exhume burial sites in a process of truth and reconciliation, identifying and returning remains to loved ones.

Although she did not know it at the time, less than a mile away from where Groleau was excavating Wari ceramic sherds at the Conchopata site, forensic anthropologists were doing their own excavations—of mass graves at the notorious Los Cabitos military barracks, where government forces killed suspected insurgents. It was several years later, when a forensic team member asked her to identify some Wari pot sherds that were excavated from the Los Cabitos mass grave, that Groleau discovered the concurrent excavations of the Ayacuchan landscape, and the divergent layers of history those excavations revealed. When Groleau accepted the position of curator of Latin American folk art at the Museum of International Folk Art in 2014, she knew that this experience would shape her first exhibition.

Crafting Memory: The Art of Community in Peru considers the legacy of the Sendero Luminoso years—but also the cultural pride and hopefulness that today’s Peruvian folk art equally conveys. “Today’s artists have created a model for how to deal with upheavals,” Groleau says. “Together, through art, they are building strength and looking not just at the challenges but for the solutions. This show celebrates the ways people have used folk arts to overcome adversity and strengthen community. While all of the pieces in the show draw on memory and heritage, the works are decidedly forward looking, mapping out a future based on strengthening local cultures and valuing indigenous traditions and experience.”

Located physically at the heart of the Crafting Memory exhibition is a space devoted to memory, inspired by El Museo de la Memoria (Memory Museum) in Ayacucho. In the early years of the conflict, indigenous women created the organization ANFASEP (National Association of the Families of the Disappeared) to help find information about los desaparecidos and to care for orphaned children. Along with information, they also sought and shared food, education, and mutual support. One unanticipated outcome was the role that folk art played in healing, preserving memory, and seeking justice. Another result was the creation of the Museo de la Memoria, para que no se repita (so it is not repeated), as its motto states.

The ANFASEP women taught children, who came to their center daily, how to make retablos. The traditional Peruvian retablo is made of painted wood, and opens like a two-door cabinet to reveal narrative scenes depicting daily life and customs in the form of figures molded from potato paste. This art form had long been a staple in the highlands, popular in Ayacuchan homes as well as among tourists as souvenirs. The children’s retablos were different. As they created scenes within the retablos, they articulated their stories and traumas, making visual testimonials to the violence surrounding them.

Rosalía Tineo’s Ayacuchano ceramic figures and whistles, known as Huayli, follow a similar trajectory of changing meaning in a traditional art form. Artisans typically hand-build Huayli ceramics in the form of animals, humans, or nativities and other biblical scenes. Rosalía learned this tradition from her father, Don Leoncio Tineo Ochoa, as he learned from his elders, a family legacy that reaches back through many generations. As a member of the generation that lived through Peru’s twenty-year insurgence, Rosalía periodically reflects on its devastations in her own whistles. Camouflaging itself among the more traditional and benign iterations of animals and indigenous figures is one set that depicts her father’s experience of the war. Don Leoncio is shown kneeling before a member of the militia, his hands behind his hooded head as the armed man hits him with the butt of a rifle. A blindfolded woman (Leoncio’s wife) and a neighbor girl shielding her eyes are sightless witnesses to the crime. Far from the emotional register of a souvenir, this Huayli vignette speaks to the necessity of not forgetting even the most brutal memories. And it invests a popular folk art form with greater community relevance.

Peru’s Time of Violence produced absence and silence, and relied upon fear and intimidation to ensure that silence persisted. Therefore, to march, to create, and to bear witness were radical and precarious acts that reasserted the voices of victims. For the women of ANFASEP, and the children in their care, to remember was to resist. The exhibition’s selection of retablos, ceramics, and illustrations affirms the role of folk arts in perpetuating memory and safeguarding dignity.

Not all arte popular (popular art) of today contemplates this legacy of fear or violence; the exhibition also demonstrates joy and pride in both heritage and craftsmanship. Other examples of contemporary arte popular from both the highlands and urban centers symbolically encircles the exhibition’s “Memory” space. The famed Oncebay family of weavers from Ayacucho works collectively to create remarkable textiles that incorporate pre-Columbian motifs, such as a shawl with Wari designs, or a weaving that includes embroidery of ancient Paracas-style figures. Each family member participates in this centuries-old weaving tradition: the mother spins the wool, the father and brothers dye and weave the wool, and the three daughters create the embroidered designs. While the Oncebays do not reflect the Time of Violence overtly in their work, their story nonetheless reveals collateral consequences of the armed conflict. The family found itself under curfew, and consequently lost their means to sell their work. As a result, they devoted themselves to the study of their ancestors’ ancient imagery. Since the 1990s, the Oncebays have worked to resuscitate Wari techniques and motifs in Peruvian weaving.

Some of the artists included in Crafting Memory employ the strategy Groleau refers to as “remixing”—that is, asserting cultural pride by reviving pre-Columbian motifs or traditional techniques but then blending them unapologetically with a modern sensibility. Lima-based artist Qarla Quispe, for example, creates contemporary interpretations of the familiar pollera, the full-gathered skirt that Andean women wear with layers of petticoats. Quispe’s versions, with printed fabrics based on her contemporary drawn designs, establish indigenous heritage within modern fashion. For many generations, urban Peruvian audiences viewed the pollera scornfully, as a touristic stereotype or a sign of rural poverty, so by positioning the Quechua staple this way, Quispe counteracts the stigma long associated with indigenous dress. She also contradicts its association with artifacts of the past. “Native culture is not only heritage,” Groleau says, “it is the present and future.”

Aymar Ccopacatty accomplishes the same type of revalorization by remixing the traditional chullo, the brightly colored knit cap with earflaps and tassels that men in the Peruvian highlands make and wear, with an urban folk aesthetic. Among indigenous communities, Ccopacatty explains, the chullo symbolizes authority, worn by a man once he becomes an adult and assumes more responsibility in the community. His sculpture Ch’ullu for a New Leader is an oversized chullo—measuring ten feet tall—knitted from discarded plastic bags, caution tape, and fabric litter collected from around Lake Titicaca. Once sacred to the Inca, Lake Titicaca is today contaminated by sewage, trash, mercury, and a variety of other pollutants that poison the fish and sicken those who live near the lake’s banks. A mountain of plastic trash, the most modern of materials, encircles the water.

The giant chullo, knitted from this refuse, clearly comments upon this environmental travesty at the same time that it situates authority for the lake with the Aymara and Quechua, for whom Lake Titicaca represents their ancestral heritage and future wellbeing. It’s impossible to ignore its larger-than-life scale, which establishes the iconic importance of this traditional article of clothing. Moreover, as Ccopacatty knits these colorful plastics together with the help of youth at a regional children’s center, the process echoes ANFASEP’s catalytic practice of creating community through folk art. Just as the children of ANFASEP healed wounds and shared a sense of unity with other survivors during the Time of Violence through the retablo, the children who participate in knitting plastic adaptations of traditional attire acquire a sense of shared stewardship of both the environment and their cultural heritage.

Laura Addison is the curator of European and American Folk Art Collections at the Museum of International Folk Art.