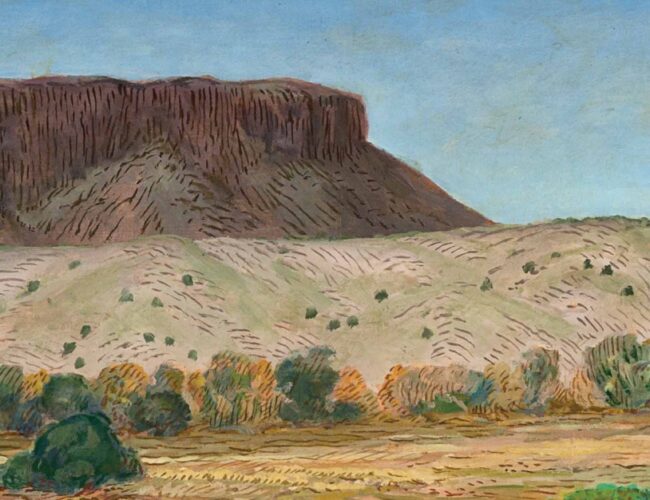 Note
This is the latest in a series of commemorative poems El Palacio has commissioned from Carlos Contreras. He has also written “Along the Beaten Path” for El Camino Real (bit.ly/ecrpoem), “It Used to Be a Village” for Coronado Historic Site (bit.ly/chspoem), and “Communion in the Desert” (bit.ly/nmhmpoem) on the occasion of the opening of the New Mexico History Museum, among others.

A FESTSCHRIFT ENDING ON A DRAWING BY RICHARD TUTTLE

WHAT CAUGHT MY EYE

Would life be richer if the sunflowers blooming
Became tanagers and feathers flew out of the bird.
Maximilian yellow hit the George Bellows blue sky

I used to live below the abstract, adobe,
a tract house in the real.  Our field flanked
La Mesita, inhabiting John Sloan’s masonite.

Oh Georgia, You drew me, lured by a skull,
a blue feud. I arrived and found a pelvis
by the road, caught is what I know about bone.

I ride this white painted horse home from the
“Rendezvous.”
My horse is in oil.  My horse is in alfalfa.
A group from India passes between this life and my last.

Two of them take illicit photographs
next to two Hopi dancing in bronze,
a rattlesnake held in teeth

The man who donated his kidney strolls by.
Life always grabs me, rattle and fear,
Though my people rarely handled snakes.

Paint gasps for canvas.
We toss our lives back and forth, smile,
Handle what we dare.

This poem was previously published in The Singing Bowl
(University of New Mexico Press).

Thunderheads above the Plaza,
a stop, a start—
guitar and violin rehearse.
One of those days
when conversations can go wrong
but the violinist is barefoot and cheerful
in hot pink and kelly green
and the guitar player smiles adoringly.
“It’s fantastic!” comes from the audience.
Rehearsals are confusing,
as is life,
the same problematic measure
over and over
and how many times I’ve looked
at these murals—
St. Clare rejecting the worldly life
in Pre-Raphaelite fashion.

The crucifix reaches higher
than the Mayan priest’s staff—
these images speak of conquest—
and Christopher Columbus
dreaming of a schooner’s
red sails at sunset.

Then Robert Schumann
Piano Quintet in E-flat,
the poor composer
dying in the insane asylum.
Yet it seems so amazing
to be walking around needing only
a stringed instrument
to produce these notes.
The piece so familiar to my ear
yet essentially unknown.
Notes falling and falling and falling.

How each person
in the audience
contains an entire world,
remains mysterious,
even to themselves.
Sorrow, greed, opinion, accomplishment, secrets, lunch.
Who can walk down an avenue
in a great city and say—
I am complete.
Now the violinist is playing the cello!
Showing off or to prove a point.
And the cellist is laughing.

THE REHEARSAL AT ST. FRANCIS AUDITORIUM

Xylophone, triangle, marimba, soprano, violin—
the musicians use stopwatches, map out
in sound the convergence of three rivers at a farm,

but it sounds like the jungle at midnight.
Caught in a blizzard and surrounded by wolves
circling closer and closer, you might

remember the smell of huisache on a warm spring night.
You might remember three deer startled and stopped
at the edge of a road in a black canyon.

A child wants to act crazy, acts crazy,
is thereby sane. If you ache with longing
or are terrified: ache, be terrified, be hysterical,

walk into a redwood forest and listen:
hear a pine cone drop into a pool of water.
And what is your life then? In the time

it takes to make a fist or open your hand,
the musicians have stopped. But a life only stops
when what you want is no longer possible.