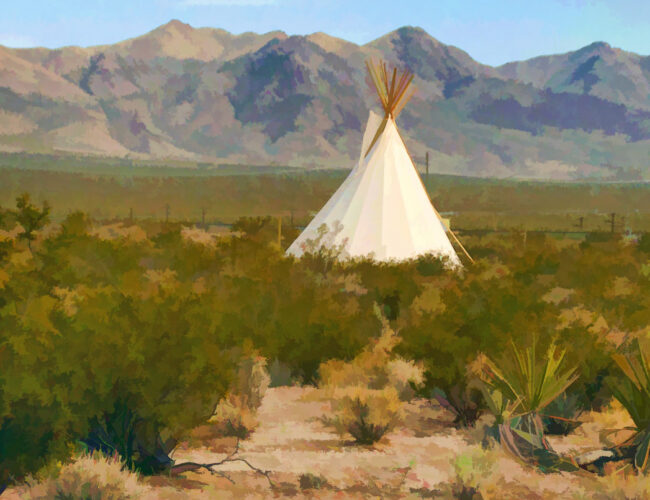 In 1967, I turned twenty-two years old at New Buffalo in Arroyo Hondo. I loved living in tipis and working outside with other people. We shared a vision of a future on the land that was empowering and spiritual.

But just after the Summer of Love, in 1968, travelers inundated our  commune. Some were helpful and vision-sharing, while others were just deadbeats. We held a meeting to discuss the problem. I suggested that the most loving way to deal with people was to explain that they were welcome to stay if they helped out, but not if they just wanted to hang out. One of our male leaders, George, immediately told me that New Buffalo was not supposed to have any rules, and suggested that I leave. So I left.

At first I felt sad, but new adventures called, and I decided that leaving wasn’t such a bad idea after all. I eventually ended up across the valley, near Dixon. My friends Roger and Marta Chilton had land there, and needed a house sitter.

It was part of a compound of two small houses that shared a driveway, a tipi, and land that extended beyond the Llano ditch to an apple orchard and Embudo Creek. I’d been supporting myself by making and selling welded belt buckles and other bronze jewelry, a so I set up my work table at Roger and Marta’s house. The other house was occupied by a guy who went by the name Freaky Frank, his wife, and their small daughter. Frank, a mechanic and light show artist, was one of those tall, lanky, hippie guys. Our scene was off the main road and mellow. People were always dropping in from other places.

In October, Frank got a job to do a light show in Albuquerque for the band Cream. Of all the trucks in our driveway, my 1949 stake-bed was the only one running, although it had a bad oil habit. We drove down to the city, and Frank did the show. There was a party afterwards at a hotel with a large, blue swimming pool. I asked Cream’s drummer, Ginger Baker, to jump in with me, but he didn’t. Long after midnight, we set out for home. I was so tired that I fell asleep on the truck bed. In Santa Fe, we stopped for gas, and Frank forgot to check the oil. At dawn, just past Española, the truck blew a rod, and marooned us by the side of the road. Soon, a VW bus with California plates stopped for us. There were three people in the van: a bearded man with small eyes (the driver), a young woman with long straight hair, and a very young looking, fresh-faced man. They gave us a ride home, and because they needed a place to stay, we offered them the tipi.

We hadn’t expected them to stay more than a few days, but they settled in, and soon met many of our friends. I noticed that Charles, the bearded man, ordered the other two around, saying “Woman, bring me my pipe,” and “Woman, make the fire.” The young man also acted like a servant. This was not normal hippie behavior. I really wanted to get the woman alone to ask her why she put up with being treated this way, but Charles was always watching. Stress began to bloom between the tipi dwellers and our family. We wanted them to leave, but in the spirit of love, didn’t feel we could ask. I was only in charge of Roger’s house, and I didn’t feel empowered to control the rest of Roger’s property. As a single woman, I had no backup. And Charles was intimidating. I don’t remember him ever directly threatening us, but he gave off very bad vibes.

In our community, everyone shared food, told stories, and made music. We enjoyed a wonderful sense of trust and community, but not with Charles and the others around.

One day, the young man came to my house and said that Charles requested my presence at a pow wow right away. I was not amused by the demand, but went.

Charles held court on a wooden seat covered with an Indian blanket, and indicated that I should sit on the grass. The young man and woman stood behind him. He told the woman to give him his long, feathered pipe; he lit it, and then insisted that I smoke the “peace pipe.” I took a drag and handed it back.

“These people need a leader to organize them,” he said. “I see you are a strong, intelligent woman. Together, we could help them.”

“I’m not interested in leading anyone,” I said. “My neighbors are happy living their own lives.”

“I guess you are not as smart as I thought,” he said, and that was it. I left the tipi and went back to my work.

One day, I caught a ride with Charles and his crew into Española to buy jewelry supplies. Rather reluctantly, I settled on the bed in the back of the VW bus. It was a miserable way to ride, lying down, not being able to see out.

We stopped in Española, and I got my wire. But they stopped in many more places, and the day was wasting. At last, we headed for home. At the junction of the road to Truchas, we picked up a hitchhiker. He was in a hurry to get up to Truchas, and convinced Charles to take him there.

I told Charles that as long as we were in Truchas, it was much shorter to take the back road to Ojo Sarco and down the canyon to home, but he ignored my advice. I saw a friend’s truck near the post office, and I asked him to let me out, but Charles ignored my request.

All along the route, Charles seemed to hit every bump in the road on purpose. When we pulled into the driveway, Charles and his followers got out of the bus and walked away without opening the back for me. The side door was packed with cedar firewood, so I opened both side doors and let it all slide out. As I put my feet on the ground, Charles came up behind me and slapped my butt really hard. It was like an electric shock up my spine. I tried to kick him in the balls but I missed, then I tried to hit him, but he blocked my hand. He walked away, laughing at me. I was so frustrated.

A few days later, they packed up and left. We were all relieved. Life went back to normal, and I soon forgot about them.

In May of 1969, I left Dixon and drove to Alaska. I wanted to live alone in the woods, and I didn’t feel that I could safely do that in New Mexico. The Hog Farm had invited me to come to Woodstock, but the magic of those times had worn off for me and I wanted something different. I never imagined that I would spend the next forty-four years in Alaska.

By the late fall of 1969, I was living out in the Alaskan wild­erness. In a letter, my mother told me about the Sharon Tate murders, and asked if I knew “those people.” I indignantly wrote back saying that I didn’t know any murderers. I couldn’t imagine that people who looked like my friends could do anything like that. I still hadn’t learned that not all men with beards were peace-loving hippies.

In 1970, I flew back to New Mexico for a visit. When I went to Dixon, my friends said, “Remember that guy who stayed here? That was Charles Manson.” I was horrified to think someone I had met was a murderer, but it wasn’t until later that the knowledge began to haunt me for years. Even in far-off Alaska, I didn’t want to talk about Manson, because I was afraid he would send one of his followers to harm me.

At the New Mexico History Museum’s recent symposium on the sixties, one of the speakers mentioned they had heard that Manson had been in New Mexico but they didn’t think it was true. I raised my hand and said it was. Later, I was invited up to the podium to finally tell my story.

The day after I got home from the symposium, I heard on the news that Manson had died.

Denise Lassaw was born in New York City. She lived in Alaska for 44 years and is the archivist for sculptor Ibram Lassaw.