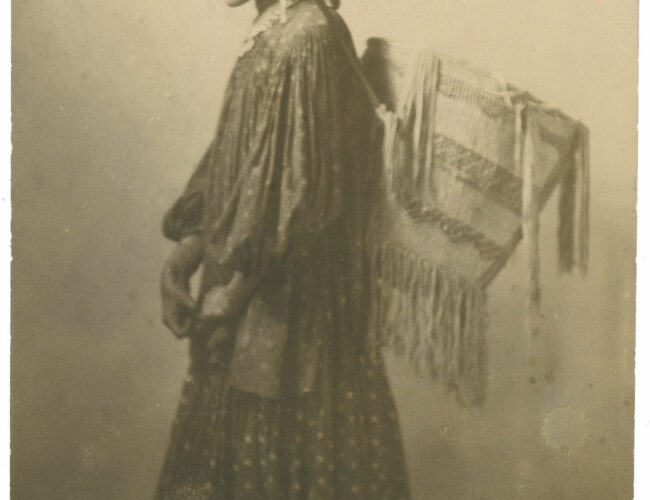 Carl Newland Werntz was a painter, fine arts photographer,  advertiser, illustrator, cartoonist, world traveler, and educator from Illinois. Trained at the Art Institute of Chicago, he founded a rival school, the Chicago Academy of Fine Arts, in 1902.  He likely took this photograph prior to that, while traveling in the Southwest.

Unlike in more common, stiffly posed portraits of the era, Werntz’s subject steps forward with care and deliberate grace, her burden basket behind her as she moves across a vague space. Yet, this single, mediated image has wider implications. Other prints made from the original negative reveal that Werntz photographed the young woman in a building with wooden floors and framed doors, perhaps at Fort Apache. In those copies, you can see through a doorway behind the girl, into another room lit brightly by a window. For this particular print, Werntz instead closely cropped the image and printed it in soft focus, a reflection of his pictorialist sensibilities. Many non-Native photographers working in this style depicted Native American subjects symbolically: as a timeless, idyllic people, as a “vanishing race,” or, in this case, as a metaphor for time: an innocent girl at the brink of the nineteenth century, stepping into an uncertain future as an adult of the twentieth. However, this interpretation more likely betrays Werntz’s perspective than hers.

For another perspective, visit the Museum of Indian Arts and Culture’s most recent exhibition, Lifeways of the Southern Athabaskans, curated by Joyce Begay (Diné). It contains not only photographs, but material objects created by southwestern Apache groups including moccasins, baskets, pottery, and tools, which help Native and non-Native people today understand the lived experiences of historical Athabaskan-speaking people. These rarely seen objects represent their creators’ ways of knowing, and express their observations, their expertise, their artistry, and their innovations—from their own perspectives.

Hannah Abelbeck is the digital imaging archivist at the Photo Archives of the New Mexico History Museum/Palace of the Governors. The archives can be searched online (with the option of ordering prints) at palaceofthegovernors.org/photoarchives.html.