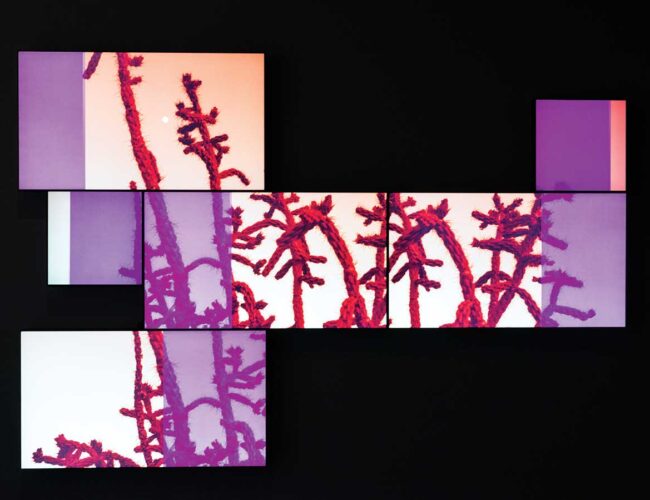 Planning for our centennial exhibitions required reflection on the past, but also the kind of bold thinking under which the Museum of Art was founded. Rather than a chronology of the institution, our centennial celebrates the museum as an active place where art and history are archived, catalogued, and created. Contact: Local to Global reflects the New Mexico Museum of Art as a point of contact for the visual arts in New Mexico over the past five decades. Thirty artworks from across time, media, and interests illustrate the diversity of artistic approaches and media that have intersected in New Mexico and at the Museum of Art over the past half century. This continuum of contact between New Mexico and artistic discourse, inspiration, and production is at the heart of the show.

Contact: Local to Global presents work from the latter half of the twentieth century to the current day, and highlights the engagement of artists with New Mexico; the New Mexico Museum of Art with artists and collectors; and New Mexico’s engagement with national and international art communities. A combination of artists, media, and time periods illustrates the diverse art and artists that enrich the state’s cultural life. The twenty-three artists in this exhibition, most with work in the museum’s collection, include major players in the international art scene, such as Sol LeWitt, Agnes Martin, Bruce Nauman, and the artist collective Postcommodity; local heroes with national and international recognition, including Diego Romero, Virgil Ortiz, Peter Sarkisian, and Susan York; accomplished artists who also made significant academic contributions to their field, such as Clinton Adams, Garo Antresian, and Rick Dillingham; and a few artists early in their careers, including Jami Porter Lara, Ati Maier, and Jen Pack.

Postcommodity, Pollination, 2015. Immersive installation, 120 × 295 × 193 in. Collection of the Scottsdale Museum of Contemporary Art. Gift of the artists. Photograph by Jeff Medinas.

The sophisticated ceramic works that artists continue to make in the Southwest build on centuries of New Mexican Pueblo pottery traditions. Artist Jami Porter Lara forages for clay and uses traditional, hand-building and firing methods to create her black pottery. The shapes draw inspiration from historic forms and contemporary sources, including the ubiquitous screwcap neck of a plastic water bottle. The beautiful, burnished surface and the familiar but exaggerated shapes bring attention to the unusual juxtaposition of form and media, which in turn draws correspondences between the historic and contemporary, and the natural and technological worlds.

The shape of a forty-ounce plastic soda bottle nearly doubles in scale in Porter Lara’s LDS-MHB-9SBR-0917CE-01 (2017). The polished surface of the familiar, yet engorged, bottle form has sprouted four additional screwcap necks on either side of the usual central spout. The hand-built, stone-burnished form, created with clay from the earth, is in opposition to the machine-fabricated, petrochemical version we are accustomed to. This transformation of form and material alters our perception of the object. Through mutation, Porter Lara elevates the bottle’s shape, familiar on a supermarket shelf, or flattened by the side of the road, and evokes a comparison between this eight-armed vessel and a statue of the Hindu deity Shiva.

The mix of traditional pottery and Western popular culture is central to the work of Diego Romero, who has a direct connection to the tradition of Pueblo pottery, and uses traditional methods to produce contemporary ceramics. Raised in Berkeley, California, Romero spent his summers at his paternal grandparents’ home on Cochiti Pueblo, where he now lives. Romero’s bowls address art historical and social issues, and use a Pop Art or comic book style to comment on pueblo life.

His Olympia (Chongo Made and Painted Me) (2000) makes reference to nineteenth-century French painter Édouard Manet’s oil on canvas, Olympia (1863), in the collection of the Musée d’Orsay, Paris. Romero’s Olympia, a reclining nude with dark, straight hair, wears a tablita—an ornate headdress that Pueblo Indian women wear in ceremonial dances. As is the case with Manet’s pale-skinned Olympia, whom he depicts reclining while a black female servant presents her with a floral bouquet, we can study Romero’s Olympia in terms of race, class, and gender. The signature on this work, “Chongo Made and Painted Me,” refers to Romero’s alter ego, as well as characters that often appear in his work, and is slang for an indigenous man who wears his hair in a traditional bun, or chongo.

At the time of Manet’s painting, the public was accustomed to seeing painted depictions of nude women, but these figures were usually intended to represent goddesses or mythological figures. The controversy, among other scandalous aspects of the 1863 painting, was that the nude figure depicted an upper-class courtesan within a contemporary scene. Manet and Romero, over a century apart, both subvert a traditional mode of presentation by modernizing the subject matter.

At the other end of the spectrum are works of art that employ conceptual, high tech, and non-traditional strategies and means of production, like Sol LeWitt’s conceptual Wall Drawing #73, from the New Mexico Museum of Art collection. In the 1960s, artists began to experiment with artworks that gave priority to the idea or concept for an artwork over the production of an object. In 1967, in a few short paragraphs published in Artforum magazine, LeWitt named this new art form conceptual art and defined some of its characteristics. In the conceptual art model, the visual artist’s work becomes like architectural plans or a musical composition, completed with an idea that others can build or perform. Every time a wall drawing is exhibited it must be redrafted. The installation of Wall Drawing #73, for this exhibition was drawn in graphite on a white wall by artists Roland Lusk and Susan York over the course of eight days. They followed LeWitt’s directions: “Lines not straight, not touching, drawn at random, uniformly dispersed with maximum density, covering the wall.” This work was originally drawn as a gift to Lucy Lippard, a noted art writer and proponent of minimalist art, who later went on to be a strong voice for the work of feminist and multicultural artists. Now a New Mexico resident, Lippard gave the drawing to the New Mexico Museum of Art in 1999. At the close of this exhibition, the drawing will be painted over and the directions will be kept in our collection storage to be re-executed at another time. Wall Drawing #73, has been loaned and exhibited at the Museum of Contemporary Art Chicago and the San Francisco Museum of Modern Art.

It was good fortune to have Santa Fe-based artist Susan York assist with the drafting of Wall Drawing #73. Known for working primarily in graphite, both drawn and cast, the artist’s work is represented in the exhibition by Floating Column (2008), a fourteen-foot column of solid, cast graphite. The dark and polished column hangs from the ceiling, hovering just above the floor of the gallery. On loan from the Lannan Foundation Collection, this is only the second time that this large-scale sculpture has been installed for public view.

York’s 1:1 Lannan Floating Column (eye level from the floor) @ NM Museum of Art Centennial 1917–2017 (2017), is a graphite drawing on paper that depicts a detail view of the column as installed at the museum, and hangs near the impressive sculpture. This pair of objects is a fine encapsulation of this contemporary New Mexico artist’s current work. York was born on the East Coast and raised in Albuquerque, where she attended the University of New Mexico. She received her Master of Fine Arts degree from the Cranbrook Academy of Art and has based her studio practice in Santa Fe since the 1980s. York’s influences include the Dutch de Stijl movement, her friendship with mentor Agnes Martin, and the aesthetic qualities of the expansive New Mexico landscape. A similarly minimal response to the light and land of New Mexico appears in the atmospheric works by artists Agnes Martin and Stuart Arends that hang nearby.

Yorgo Alexopoulos uses state-of-the-art custom software and electronics to make his artwork. On loan from the collection of Carl and Marilynn Thoma is Alexopoulos’s Everything In-Between (2014), from the series No Feeling Is Final. Six connected electronic screens of varying sizes flood with a synchronized composite of scrolling horizontal and vertical images. The desert landscape, symbolic geometric forms, and archetypal images present the artist’s reflection upon individual and collective connections to things larger than ourselves. Glowing light beams out a non-objective narrative that is similar visually and in intent to earlier works by the Transcendental Painting Group (TPG). Founded in New Mexico in 1938, the TPG employed color and light to imbue their non-objective paintings with idealistic and spiritual content. Filmed and commissioned in New Mexico, Everything In-Between illustrates the continued relevance of New Mexico’s topography as a direct source of material and inspiration for artists.

The land also appears in Postcommodity’s Pollination (2015). This ambitious, immersive installation is on loan from the Scottsdale Museum of Contemporary Art, and like the Sol LeWitt wall drawing, it’s re-built each time that it is exhibited. Postcommodity is an indigenous artist collaborative composed of three artists: Raven Chacon, Cristóbal Martínez, and Kade L. Twist. In a manner similar to the life-sized tableaus of artists Edward and Nancy Kienholz, Pollination recreates a peepshow environment of a hallway with closed doors and individual viewing booths. As a collective, these artists challenge the role of the individual artist as author and provoke viewers to take an active role while engaging with the piece.

To fully experience this installation, visitors must enter a viewing booth and deposit a token. This commercial transaction prompts a screen to rise, giving the participant a glimpse of a lush garden setting. Environmental and ecological issues come to mind as one views the scene, as the glass and frame of the viewing booth create a barrier. Replacing live performers with a bucolic landscape, the artists play upon a longstanding tradition in Western visual and literary arts, which links the female form to nature. The absurdity of this interaction tempers the larger ideas the artists are addressing, among them personal and environmental isolation, separation, and exploitation.

The unconventional format of the Postcommodity installation shares space in the exhibition with less traditional works, like Alexopoulos’s Everything In-Between and Ati Maier’s high-definition video projections The Placeless Place (2016) and The Map Is Not the Territory (2013). The wide range of materials and subject matter in Contact: Local to Global reflects the diversity of artists and ideas that find a home and a voice in New Mexico, and that define the visual arts of their time.

Many artists still make New Mexico their home. Others pass through as tourists, participate in exhibitions, and work with New Mexico’s many outstanding foundries, print studios, ateliers, and institutions, including the University of New Mexico, Tamarind Institute, Art Foundry, New Mexico State University, the Institute of American Indian Arts, Site Santa Fe, and the Roswell Artist-in-Residence Program. As the only contemporary collecting institution in Santa Fe, and the art museum for the state of New Mexico, the New Mexico Museum of Art captures, collects, and documents this range of intersections and crossovers from our varied citizens, visitors, and institutions, as they all contribute to New Mexico’s robust relationship with the visual arts. Just as they did a century ago, at the encouragement of Edgar Lee Hewett and Robert Henri, artists continue to find New Mexico the sort of community that welcomes artists and encourages the production and exhibition of progressive artworks that challenge traditional artistic practice and advance new thinking in the arts.

Merry Scully is head of Curatorial Affairs and curator of Contemporary Art at the New Mexico Museum of Art.