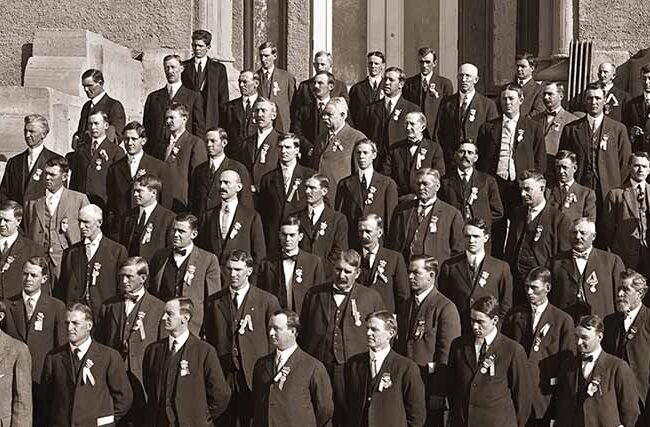 Sixty members of the 1912 Dedication Class, including Sylvanus J. Morley, pose on the steps of the new Santa Fe Scottish Rite Temple. Photograph by Jesse Nusbaum. Courtesy Palace of the Governors Photo Archives (NMHM/DCA), Neg. No. 061385.

From its inception, the Santa Fe Scottish Rite Temple was a touchstone in the debate over what architectural style was most appropriate for Santa Fe. A short article in the “Society” section of the Santa Fe New Mexican on November 16, 1912, the day before the grand opening of the Scottish Rite temple, noted that the Alhambra was a symbol of the beauty and romance of Old Spain. The columnist said that several people had described the new temple as entirely foreign to Santa Fe, in connection with the question of modeling all buildings in the city after Mexican or Spanish precedents. But the writer disagreed and noted that Moorish-style architecture could be considered the grandsire of New Mexico architecture.

The Scottish Rite Temple exterior color drew attention even before the building debuted. The same article noted that the entire building was tinted in the soft pink of the original Alhambra. Painted sections inside the tower, as well as early colored photo postcards, show that the building was a much more muted shade than it is today. Regarding the color of the temple, we should recall that the Spanish name Alhambra derives from an Arabic word that means “the red one.”

Apart from the large number of words of Arabic origin in Spanish (such as albóndiga, adobe, almohada, and Guadalupe), Islamic influence can be clearly traced in the art and architecture of Spain and its former overseas colonies. Examples of Moorish, or mudéjar, elements in Spanish colonial arts include tile work, ceramics, and complex wooden ceilings in the artesonado style.

The plan for the Scottish Rite building went through at least two style iterations and a change of venue before creation of the Moorish fantasy inaugurated in 1912. How did the Scottish Rite Temple go from mission revival style to neoclassical revival to Moorish revival? Enter Edgar Lee Hewett. [Architect Isaac Rapp and Hewett] became Freemasons in Montezuma Lodge No. 1 in 1908, and they both joined the Scottish Rite in the class initiated on April 26, 1909. Santa Fe’s Masonic groups counted as members a large number of the community’s most influential figures, including Hewett and Rapp and also archaeologist Sylvanus G. Morley, photographer Jesse L. Nusbaum, and, later, architect John Gaw Meem.

The Santa Fe Scottish Rite Temple: Freemasonry, Architecture, and Theatre, edited by Wendy Waszut-Barrett and Jo Whaley, was published in May 2018 by Museum of New Mexico Press.