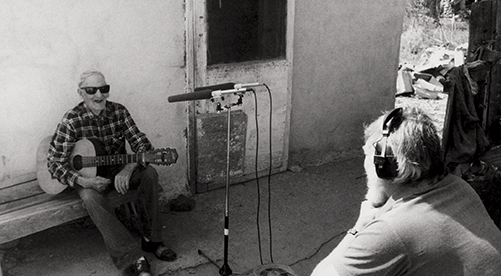 Jack Loeffler’s feature, “The Practice of Aural History” describes his epic, lifelong project of recording “the myriad sounds recalling the half-century timespan of the spirit of place that pervades this region of the planet.” He decided that “oral history” was too linear to encompass his project’s ethos, and so he coined a new phrase.

Loeffler’s recordings preserve music, spoken word, conversations, and the sounds of the desert at sunrise for posterity. As a writer, I aim to preserve particularly resonant bits of conversation by writing them down for possible later use. As Anne Lamott once said to a crowded room of aspiring writers, “If you don’t carry a little notebook around in your back pocket, I can’t help you.”

For instance, I’m remembering the words of an Australian friend who pointed out that passionately disliking the word “moist” is very American. (Google it if you’re not already apprised.) Also, chocolate and peanut butter, in the form of a sweet treat—very American. It was, on the one hand, small talk, but it also made me aware of a certain kind of discernment that I don’t have. Not that it’s stopped me from eating dark chocolate peanut butter cups.

Another layer of discernment is the recognition of corporate world jargon, aka corpspeak. Sounds a lot like “corpse-speak,” which alludes to its deadening effects. Getting granular, drilling down, deep dive, robust, and oh my heavens, the phrase “out of pocket” to mean “unavailable” makes me want to jump up and down and shriek. Didn’t it mean having to pay for something, just yesterday?

Please don’t mistake me for someone who doesn’t acknowledge that language is evolving all the time. I appreciate language’s dynamism. I love old, moldy words and terms as well as shiny new ones, but I dislike it when words get co-opted in unsavory ways. Confession: Before I discerned the corpspeak beast, I kind of liked “getting granular.” When I try to avoid saying it, it’s hard to come up with a better alternative. Yet on the whole, “Jargon masks real meaning. People use it as a substitute for thinking hard and clearly about their goals,” said Jennifer Chatman, management professor at the University of California-Berkeley’s Haas School of Business in a 2012 Forbes article.

My copy editor friend said that she dislikes the words “myriad” and “plethora” in articles, which made me word-nerdily thrilled, because I feel the same way. (Not including the usage of “myriad” in Loeffler’s quote, of course. That is actually used properly.) But often, it’s a hackneyed way of trying to sound highbrow that has the undesired effect of causing readers’ eyes to glaze over.

Other languages have words and terms that don’t exist in English. German’s innere Schweinenhund translates to “inner pig-dog,” and refers to that part of yourself that encourages you to blow off your virtuous commitments—to work out in the morning, to meet a friend after work, to make that donation to a cause you believe in. I’m all for scapegoating a mythical pig-dog instead of myself. Instead of shaming myself, which just makes me want to self-soothe with ice cream, I can pat my inner pig-dog on the head and then go put on my workout clothes. Perhaps my inner pig-dog is a mimoso, the Spanish word for a person or animal who needs physical contact from their loved ones in order to feel secure.

Coining new words and terms, like “aural history,” to pin down as-yet-unnamed concepts allows language to evolve along with the humans who speak it. It reminds me of one of this year’s Governor’s Awards winners, jazz musician Bruce Dunlap, who has a luthier add new strings to his guitars so that he can use them to make music that is beyond the reach of typical guitars. It seems to urge us all: “Don’t give up just because your vision is greater than what already exists. Build something new that will get you there.”