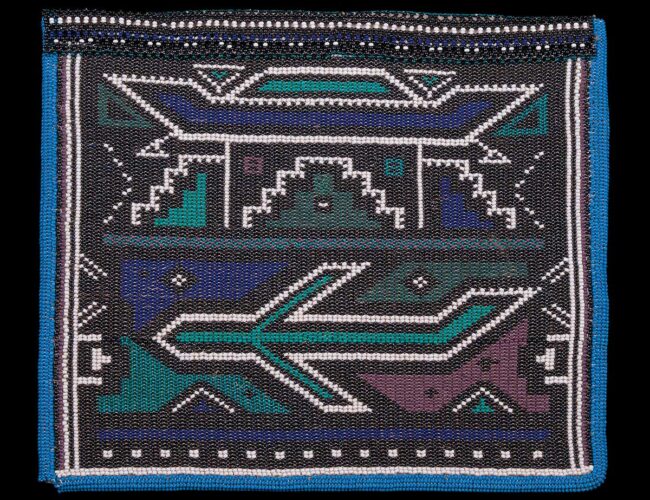 Extraordinary how a small glass bead from the Italian island of Murano or the mountains of Bohemia in the present-day Czech Republic can travel around the world, entering into the cultural life of peoples far distant. Glass beads are the ultimate migrants: Where they start out is seldom where they end up. The Museum of International Folk Art’s exhibition Beadwork Adorns the World (through February 3, 2019) shows what happens to these beads when they arrive at their final destination. Along with glass beads, this exhibition also features beads made from metal, cloth, stone, and other materials.

So completely have imported glass beads become embedded into various cultures throughout the world that, for example, people commonly associate the Plains Indians in North America with their beaded buckskin clothing. Each cultural tradition has differentiating color preferences and its own design aesthetics and sewing techniques, and beadwork adornment conveys many culturally specific messages to members of those groups. Even so, looking at beadwork around the world reveals many parallel uses among various societies.

Much of an object’s meaning is associated with how it is used in its society. In most parts of the world, beads are often used at peak moments in life. As an adornment, their luster and sparkle help to heighten effect, impact, and meaning. They draw attention to the wearer during life stages and passages; they affirm power, position, or status in the community and the high meaning of the occasion; and foster communication with the spirits, who are attracted to the beads.

A blue and green faience bead-net dress was found in an Egyptian tomb on a female mummy during a 1927 expedition. This finery surely identified a woman of high status during Egypt’s Old Kingdom. Faience beads were made from powdered quartz covered with a transparent blue or green glasslike coating. The threads holding the beads together had disintegrated; yet the beads and their impressions were still in place, allowing the dress to be reconstructed some 4,500 years later.

“In a traditional context, whatever else objects may be and do, they are first of all perceived as making statements about the self-identification of their makers and users,” Arnold Rubin stated in the 1975 Artforum article “Accumulation: Power and Display in African Sculpture.” Identity looms large in this exhibition. Ndebele beadwork from South Africa provides a clear example of this concept. When uprooted from their territory and scattered far from other members of the Ndebele community, the women reclaimed their group identity via beadwork by reviving their distinctive beaded apparel. As Ndebele women continue to make and wear the special-occasion beaded garments for which they are renowned, every member of Ndebele society is able to identify the life stage of an Ndebele female simply by looking at her traditional beaded clothing.

Eva Mirabal enlisted in the Women’s Army Corps (WAC) in 1943, saying that since there were no sons in her Taos Pueblo family, she felt that she should join in the fight. In the photograph of her image in the mirror, Mirabal sees herself dressed as a WAC, yet her Lakota beaded vest shows she identifies with her Native American heritage. Moreover, even though she is a Puebloan from Taos Pueblo, not a Lakota, her pueblo has long been an important center for trade between tribes from the Plains and the Southwest United States.

While beadwork has a lengthy history, it is truly a living art. The majority of the art works in this exhibition date from the nineteenth to the twenty-first centuries. Beadwork today comes in many forms—it may be a continuation of an unbroken tradition, perhaps with contemporary innovations, or it may be a revival of a lost form.

Lakota beadworker Thomas Haukaas sews beadwork in the traditional Lakota way, which he learned from his elders. However, Haukaas recombines traditions in new ways, allowing him to focus on social issues that confront his people. His baby cradle, entitled Immigration, is worked in nineteenth-century beads, yet reminds us that “We [the Native people] did not cross the border, the border crossed us.”

It takes an international museum such as the Museum of International Folk Art to be able to mount an exhibition of this scope, which includes beadwork from wide-ranging continents and eras. The exhibition cuts across geographic boundaries to examine this single art form as a doorway into the life of many societies. Each of the 260 objects has a story to tell.

Marsha C. Bol is a curator, author, and director emerita of the Museum of International Folk Art.