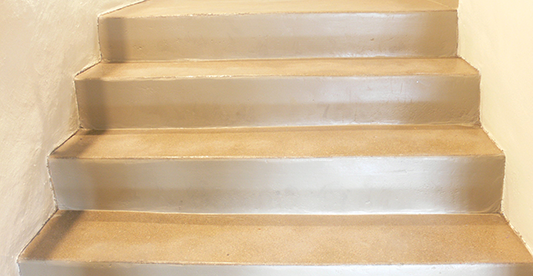 The staircase leading up to the second floor, post-renovation. Photograph by Michelle Gallagher Roberts.

One of my least favorite jobs was working as a ghostwriter for a website’s figurehead. The part about being anonymous wasn’t so bad because I was churning out personally fulfilling writing on my own time. What bothered me was that my client had such a hard time letting go of the articles that much of the work we toiled over never saw the light of day.

Remembering that gig makes me appreciate my position at El Palacio all the more. Now, my work involves creating a magazine that people can hold in their hands. El Palacio readers encounter a product that showcases the most beautiful accomplishments of our museums and historic sites. But so much work goes on behind the scenes to get to the point where the truck pulls up to the Stewart Udall Building and drops off pallets of magazines. For instance, among many other tasks, Caroline Broussard creates contracts, shepherds writers’ and photographers’ payments through their paces, and makes sure that each and every subscriber gets their copy. Her diligence prevents a lot of unhappiness.

Invisible work behind the scenes is a theme that kept coming up as we produced this issue. Michelle Gallagher Roberts at the New Mexico Museum of Art took on the role of project manager of the museum’s epic centennial renovation. Because the institution’s architecture is so intrinsically intertwined with Santa Fe and the museum’s mission, to read the story of its hydra-headed execution is to become even more intimate with Santa Fe’s history, culture—and climate, too. (That celebrated light, if unchecked, can be wreak a heck of a lot of damage on the art it inspired.) First-time visitors to the museum won’t notice the updates, but they will appreciate the reflective quality of the newly polished concrete floors, which are now lighter than they used to be. A century of wear and maintenance darkened them; this new light tone is a close match to the light floors that graced the museum when it first opened.

We look at so much of what is around us as if it just materialized out of thin air; as if it were inevitable. Take license plates, for example. I happen to know two of the people who designed those license plates: El Palacio’s own art director, David Rohr, designed the turquoise and yellow plate, and the New Mexico Tourism Department’s digital media director, Jordan Guenther, designed the new red and green chile plate. This knowledge tightens the weave of my everyday experience, turning something otherwise ubiquitous and impersonal into a reminder of connection and community.

A little-known fact about the National Trails System and Wild and Scenic Rivers Acts, which turn 50 this year, is that before the legislation was passed, Secretary of the Interior Stewart Udall courted ally Lady Bird Johnson by inviting her to float on the Snake River in Wyoming as part of his charm offensive. Trouble was, the river in question was too shallow that day. In a brilliant behind-the-scenes move, he quickly called Dan Ogden, the assistant director of planning and research for the Bureau of Reclamation, who arranged for the release of an upriver dam.

Most artists do behind-the-scenes prep work before touching paintbrush to canvas, but Frederick Hammersley elevated pre-painting to an art form in itself. He filled notebooks with diagrams, sketches, paint formula data, and columns of free-associated painting names. Hammersley clearly valued this practice, and the value has only increased since his death in 2009, as conservators and scholars use the notebooks to support their pursuits. His notebooks star alongside the paintings in the Museum of Art’s exhibition Frederick Hammersley: To Paint without Thinking.

When did Hammersley move from California to New Mexico? To search for that fact without turning to Google, I picked up the beautiful exhibition catalog and flipped the book open to a random page. There it was on that very page, in the first sentence I laid eyes on: 1968. More invisible help behind the scenes? I’m going to go with a grateful yes.