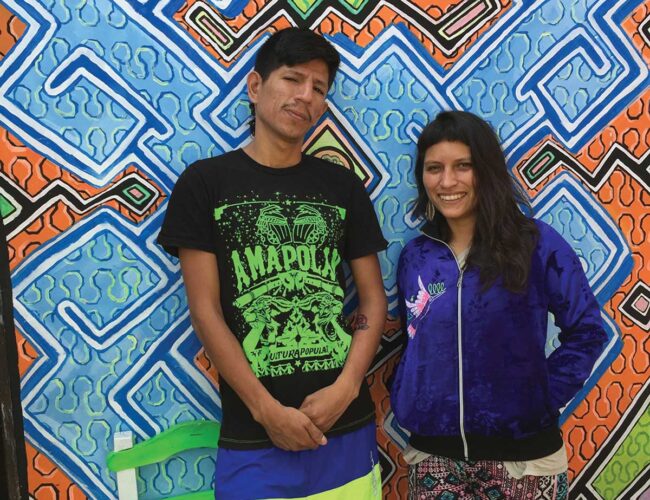 Gráfica Popular Limeña (the folk graphic tradition of Lima) was born in the streets. It has roots in working-class neighbor­hoods, on hand-lettered signs for small businesses. Swooping letters in bright colors announcing locksmiths, hair salons, and cevicherías line the market stalls and sidewalks of the city. This graphic tradition blossomed into the fluorescent artwork that has become synonymous with Lima, seen on the ubiquitous posters for chicha (a musical style that blends Colombian cumbia rhythms, Andean folk instruments, and electric guitars) concerts. The aesthetic of these posters, like the music, springs from migrant culture: a unique blend of highland and rainforest traditions in an urban context.

By the 1980s, nearly 1.5 million people from the provinces had migrated to Lima, fleeing poverty and the violence of the Shining Path conflict, changing the face of the city. Informal housing in shantytowns or pueblos jovenes began climbing the hillsides around the city and, over time, became established neighborhoods. The migrant graphic tradition references the bright colors seen in highland embroideries and the favored synthetic dyes used traditional Quechua dress. The criollo identity of Lima so firmly associated with viceregal Spanish traditions has had an uneasy relationship with migrant culture, with many considering it low-class and unrefined, in contrast to the baroque colonial heritage of the city.

Artists place fluorescent inks on black backgrounds to make the images reverberate visually. It is an art of persistence and resistance in which communities make space for themselves within a reluctant Lima. It demands to be seen. While the first waves of this style were less political, more focused on celebrating the strength of provincianos, the current makers, second- or third- generation Lima residents are using their work to call attention to pressing social and environmental issues. One such group is the art collective Amapolay, founded by Carol Fernández and Fernando Castro.

Of migrant heritage themselves, Fernández and Castro were drawn to Peruvian folk culture and studied anthropology in college. After finding the academic discussions too distancing from the people themselves, they left the discipline to pursue a path of promoting cultura popular—the culture of common people—among their fellow Limeños. Castro says, “We sought a new language for communication, and this was the language of graphics.” True to the democratizing ethos of chicha style and migrant culture, Amapolay prints their images on posters and T-shirts, common media that are accessible to everyone. Amapolay’s prints and T-shirts can be seen in the exhibition Crafting Memory: The Art of Community in Peru at the Museum of International Folk Art through March of 2019.

These media also allow their images to be mobile, spreading out across public spaces in Lima. Their work addresses issues such as ethnic and racial discrimination, toxic runoff from mining operations, and the struggle for seed sovereignty in the face of industrially engineered GMOs. In acts that they call “urban interventions,” Amapolay makes inexpensive offset reprints of their original silkscreened designs to produce hundreds of copies that can be wheat-pasted to walls and sidewalks around the city.

Their method of selling their work also takes inspiration from migrant culture. Rather than renting a storefront, Fernández and Castro organize street fairs that are held every few months in green spaces of various Lima neighborhoods. These fairs run from Friday through Sunday and bring together small independent producers of clothing, jewelry, graphics, and crafts, along with street performers and musical acts. Amapolay also conducts mobile workshops, where they collaborate with people to create designs that speak to their particular community’s concerns.

They are embarking on a similar project here in Santa Fe for a week in late June, at which time they will design with local screen printers. Their visit will culminate in a free chicha concert in the Santa Fe Railyard on the evening of Saturday, June 30. The following day, join us at the Museum of International Folk Art for gallery talks and hands-on activities with Amapolay. For more information, see page 33, visit moifa.org, and check the museum’s Facebook page.