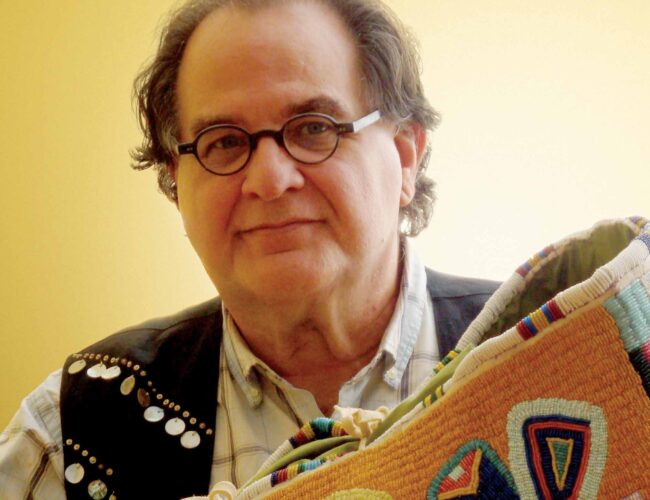 Thomas Haukaas (Lakota) beads like a painter. At first glance, a viewer might simply see colorful animals or butterflies in his soft beaded baby cradles—but a closer look reveals social messages. One cradle, Mitakuye Oyasin, depicts men, women, and children in a number of configurations. Figures robed in blue, green, red, and purple ride black, yellow, and pink horses. Haukaas’s use of the lane stitch for the light blue background results in short, layered rows of beads that create a fluid effect, giving the people and horses the appearance of being in motion.

With so much detail and color to take in, it is possible to miss the image of the courtship between two men. Viewers have to look carefully to see the short earrings and leggings that differentiate the men from the women. Inspired by painter Thomas Hart Benton’s technique in revealing subtle social interactions, Haukaas aimed to do the same with his Mitakuye Oyasin cradle—something he admits is much more challenging to do in beadwork than in painting. The inclusion of a same-sex couple on the cradle achieves this subtlety, and sends the message that the men represent one of many versions of what it means to be a family. “We get to define who we are related to,” Haukaas says. “This is who we are and what we are.”

Haukaas cites the Defense of Marriage Act as the inspiration for the cradle, which he made before the law was overruled in 2015. “In my own tribe, one of my distant cousins and his husband were awarded custody of his nephews and nieces, because the tribal court decided their own home wasn’t stable enough. It has worked out really well,” Haukaas says. “We believe that there’s the spirit and there’s the flesh. My cousin’s spirit was female, and so it was a balance between male and female, spiritually, and that’s the reason the decision was made.”

Haukaas is much like his beaded cradles. He articulates his beliefs gradually and through subtle nuances in language. And although Haukaas holds some of his opinions quietly, he welcomes curiosity and wants potential collectors to know what they are buying. “My pieces are meant for dialogue, for discussion, for thinking about,” Haukaas says. “That’s my ultimate goal.”

The Mitakuye Oyasin cradle is one of three cradles featured in the Beadwork Adorns the World exhibition at the Museum of International Folk Art (MOIFA), along with Economic Conundrum and Kimimila (Immigration), which has the most visible message. The words “the border crossed us” appear across one end and frame a monarch butterfly: a symbol of migration as well as transformation and growth. Haukaas crafted this cradle as a contribution to MOIFA’s Gallery of Conscience Between Two Worlds immigration exhibition, which concluded in 2016. “I was thinking of the DACA children when I was making that cradle,” Haukaas says. “We need to come up with some border laws that work and that are fair. What’s going on now currently is so upsetting because there are so many factions, and some of them I think are very racist. I have great difficulty with that.”

Marsha Bol, director emerita of MOIFA and curator of Beadwork Adorns the World, is a longtime friend of Haukaas and supporter of his work. Her primary area of expertise is Plains Indian art, beadwork and quillwork in particular. “I first met Tom in 1992, so as Tom might say, we’ve watched each other become elders,” Bol says. They met at a United Tribes Powwow and art show in Bismarck, North Dakota, and from the start Bol was drawn to Haukaas’s expertise and to the layered meaning in his work. “His skill is extraordinary,” Bol says. “He has really worked hard to maintain the traditions, and yet he has managed to make those traditions relevant to the tribe for centuries.”

The exhibition is accompanied by Bol’s book, The Art & Tradition of Beadwork (Gibbs Smith, Publisher). Both the book and the exhibition display beadwork from indigenous communities across the world, spanning the nineteenth through the twenty-first centuries.

“Societies around the world tend to make beadwork for particular occasions and uses,” Bol explains. “So the exhibit starts with childhood—and of course babies are the first thing.” Along with seven of Haukaas’s cradles, the exhibition also includes his fully beaded ceremonial boy’s shirt, and a ledger drawing depicting a courtship scene.

Traditionally, women have been the beadwork and quillwork artists in the Lakota tribe—and as Bol discusses in The Art & Tradition of Beadwork, this is also generally true of many tribes globally. Mastery of beadwork was one way Lakota women achieved high status, but Haukaas says that the 1935 Indian Reorganization Act changed some of the traditional gender roles within the tribe. With the act came a slew of office jobs designed to help the tribe function. “Through the years the tribes—particularly mine—have given women those jobs,” Haukaas says. “These women need money, and you are surer that the children will be fed if you hire women.” As a result of becoming the primary breadwinners, many Lakota women no longer had time to do beadwork. Men turned to cultural practices like making drums, dancing, and, yes, making beadwork.

“Men have become the guardians of culture by necessity,” says Haukaas, who himself learned the art of beadwork mainly from women. His interest in beadwork was sparked when, at eight years old, he watched traditional Lakota dancer Ellis Head dance at the 1958 O’Kreek powwow. Enamored by Head’s beaded outfits, Haukaas wanted beautiful beaded garments of his own. Lakota dancers bead their own outfits, so this motivated Haukaas to seek teachers so he could learn the art.

He laughs as he recalls that he was not a good dancer. He proved to be adept at beading, however, and chose to follow that art as well as the practice of psychiatry. In his 20s, Haukaas attended college to become a social worker, and focused on child abuse and child welfare. When it became apparent to him that abusers often did not respond to counseling, Haukaas later decided to pursue a degree in psychiatry. Haukaas sees a link between his work as a psychiatrist and his beaded cradles. “The interest in the cradles and our people is my motivating factor.”

In his own art, Haukaas eschews geometric designs in favor of the pictographic and abstract floral designs his family has long been known for. “I took my family’s work from the 1890s and put it on steroids. I blew it up, made it bigger, used more color, used tons of detail as if I were doing a really fine drawing,” Haukaas says. “I did it because I knew that my tribespeople would understand it. I want them to say, ‘I can do that too’—and they can.”

Now an elder, Haukaas mentors younger Native beadwork artists to ensure that the tradition continues. “I’m doing everything I can to help people understand that in our eyes, this is art,” he says. “I hope that recognition brings more collectors and more chances for people to put food on the table.” Haukaas points out that it’s a mixed blessing when a museum buys a big piece of Lakota beadwork, because although it provides money for the tribe, that piece becomes less accessible to the tribal members. Typically, they can’t afford to travel to urban areas or pay museum entrance fees.

As a psychiatrist, Haukaas sees the effects of poverty on his community in deeply personal ways. He is concerned about the violence that Native people continue to face, both from within and outside Native communities. “The arts help me cope with the world that I think is unfair on a number of levels,” Haukaas says.

His eyesight is going, so Haukaas estimates that he has just a few years left to make cradles. His current project is a cradle that sends a message of safety for Native children, given the ongoing violence Native people endure. Haukaas hopes to see more artists engaging with social issues. He says, “We don’t have enough artists with vision who speak the truths of our lives.”

Bol is proud that Beadwork Adorns the World features so many of Haukaas’s cradles. “There’s nothing harder to make in Lakota beadwork than a cradle,” Bol says. “And not many people do it anymore.” Haukaas sees them as soft, textured sculptures. “God, I love to hold a cradle,” Haukaas says. “There’s nothing prettier than when there’s a child inside.”

Traditionally, the maternal aunt would make a cradle to signify the special relationship she would have with the child. Haukaas has also made many cradles for family members and others within his tribe. Not only does he enjoy the artistic challenge, but he deeply considers the meaning of the images he beads onto the cradles. His images communicate the values that he wants the Creator to give the baby.

“It doesn’t matter what culture you’re in; we all want the same thing,” Haukaas says. “We want longevity, we want a good life, we want love, we want family, and we want our tribe to grow.”

Emily Withnall was born and raised in New Mexico, and now works as a freelance writer and editor in Missoula, Montana.