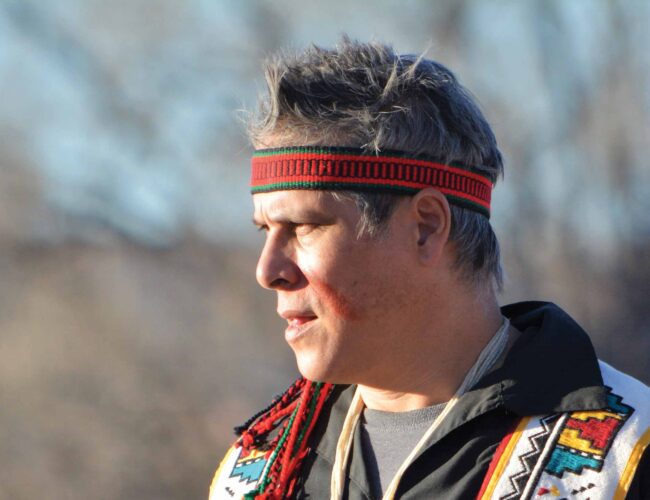 The following interview with Mateo Romero (Cochiti) describes a more abstract form of cultural appropriation that takes place in intellectual spaces such as academic institutions, museums, and art venues. Romero is a contemporary Pueblo painter and was raised in Berkeley, California. Although he grew up in an urban area, he formed a connection to Cochiti Pueblo through Santiago Romero, his father. Romero attended Dartmouth College, and studied with acclaimed artists Ben Frank Moss and Varujan Boghosian. He is an award-winning artist who has exhibited internationally in Canada and in the United States. Romero paints in his studio in Santa Fe and lives in Pojoaque Pueblo with his wife, Melissa, and their children Erik, Povi, and Rain.

Marla: Appropriation in Native American art is often considered in tangible terms, whether it is a specific design, theme or style of art. But the term semiotic sovereignty is about the space of knowledge and ideas itself in museums and academic institutions.

Mateo: Well, it actually comes from a conversation I had with Bob Preucel, an anthropologist from Brown University. Bob was talking about this term called semantic sovereignty—semantics as in language and linguistics and use of language—and this notion of using words and language to claim sovereignty. The idea really resonated with me, and I took it on as a visual artist.

Mateo Romero in his studio. Photograph by Karl Duncan.

There’s a component of lecture and spoken word that happens around art, but a lot of the work that I do, a lot of work that the artists around me in the community here do, it’s not verbal. The artist goes into the studio, and it’s kind of solitary. Artists create work and exhibit work that will show up at an opening or a museum or other art space. People look at the work over time and hopefully a dialogue grows out of it. But my thought about this term is that artists that I know, myself included, can be understood in semiotic terms—the work as a set of signs or symbols and how these constructed symbols form meaning. This of course is not my idea, but an idea that I have shifted a little and applied to my experience in the studio, using symbols to create narratives and meaning and construct identity and all these other things. The spaces or contexts that these symbols of art occupy—whether it’s a gallery, museum or university—are contested spaces, prime real estate, especially for indigenous people.

And the other thing contributing to this idea of semiotic sovereignty is from an earlier conversation I had with Oren Lyons, who was the principal chief of the Onondaga at the time. I asked him about his quote that I love so much: “True sovereignty is the act thereof.” Right? So, with sovereign space, you don’t ask someone for sovereign space. You take sovereign space. You claim sovereign space. This can be with art or language or symbolism, you know, any kind of information. Because the colonization of the Americas was so bent on taking away this space of indigenous language, symbolism, narrative and replacing it with its own, it is so important that indigenous artists, writers, reclaim these areas of knowledge through their works. This is claiming sovereignty, the space of sovereignty.

What’s interesting to me is that there are so few of us Native artists. We’re a tiny minority, descendants of the people who were left and weren’t killed in the land grab. So, we are this tiny fragment of people who are remaining and there’s not enough of us really to generate this information wholesale.

In absence of our own people generating this sovereign or conceptional space, some members of mainstream culture just take it.

Marla: It’s an appropriation of this space?

Marla: Why is it so important that artists not misrepresent themselves as Native?

Marla: It makes one wonder why someone without these experiences would claim otherwise.

Mateo: Coming from the Bay Area and being exposed to just mainstream American culture for almost half of my life, it’s not enough for me. There’s not enough there. . . . It’s too mainstream. It’s too material. It’s too focused on greed. And I can see why some artist would be like, “I’ve got to get in on this Native thing.” I get it. I understand. It doesn’t surprise me. I can think of several examples of artists whose Native identity is very suspect who have been embraced by the art world.

I feel that Native artists can’t really generate accurate cultural information or even personal information because we have this smog, cultural smog that’s being produced by people who are not from the community, and they are lying about their background in order to get access. They are unabashed. They are doing this because they don’t have a sense of their own culture. They don’t have cultural enclosures. They don’t have a sense of what community constitutes for them. So, you talk about your communities, your own closures, it’s doesn’t even register with these people.

Marla: What is it about the fabric of mainstream culture that makes this type of appropriation acceptable, and even supported in some cases, as you suggest?

Mateo: They don’t care. They don’t give a damn. They want what you have. They look at everything as a resource. Everything is something to be commodified, controlled, used, discarded. We’re in a late capitalist epoch. We are engaged in commodifying everything, and that core capitalism is anti-humanist.

Appropriation is a really dressed-up word for stealing. Stealing photography from other people, stealing ideas from other people has been going on for a long time. But it’s particularly vicious when you talk about Native communities, because we’ve been the object of discourse. We’ve been the object of colonialism and academic discourses. We have all these social problems living on the reservation in terms of compromised educational systems, low employment and economic capabilities—all these things we’re facing. And on top of it, people rip off the art. The land and resources have been taken. Now, the conceptual space of who you are is being appropriated. Your very identity is being ripped off.

Marla: So, somebody who comes in and constructs these types of “Native” identities obviously doesn’t have that primary experience you have described.

Marla: What does it feel like to have somebody steal your voice?

It’s like a call to arms. I feel like Native artists and filmmakers and writers and dancers and performers—all these people—have to occupy the space. I’m 51 years old now. I’m beginning the later part of my life, and I’m thinking if there’s a message, it’s, “Try to reach an audience of younger Native people. Energize them.”  Energize that community of Native students, mid-career artists, people who are writing, people who are lecturing, people who are teaching. Create a base of people and just tell them, “if you do not fight for this space, you will be asked out of this space. Someone else, who isn’t even a Native, will come and take your spot.”

Marla Redcorn-Miller is the deputy director of the Museum of Indian Arts and Culture.