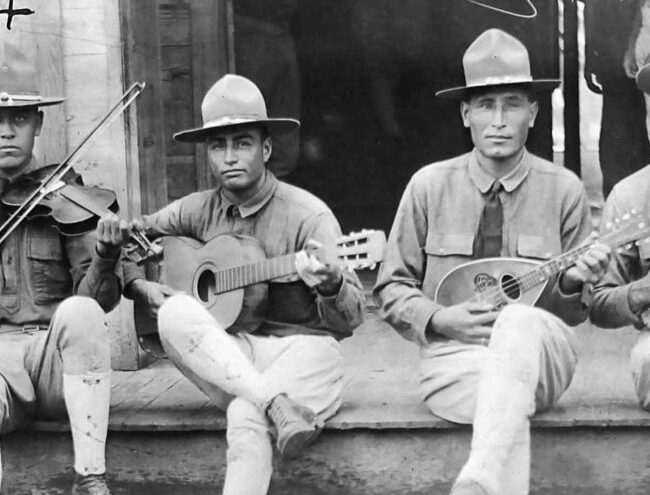 Only a few years before the United States joined the Great War as it was raging in Europe, New Mexico achieved statehood. It would be easy to assume that such a new and rural state would not figure largely in World War I, but, as ever is the case where New Mexico is concerned, you would be surprised. I was.

As curator of The First World War, a permanent exhibition that opened November 11, 2018, at the New Mexico History Museum, my research journey showed me that as long as I was willing to dig (and I was), there are countless fascinating stories of New Mexico’s experience of World War I.

Some years ago, I worked at the Imperial War Museum in London as their collections care officer, which gave me an overarching knowledge of the war. While at the museum’s five locations, I got to see the war from a British perspective. Most memorable was the European allies’ gratitude toward the Unites States for the decisive role they played. The New York Times’ front page covered the first American troops landing in France, New Mexicans among them, in its June 14, 1917 newspaper. They reported that  “Vive l’Amèrique!” was the cry from the docks at Boulogne, France, when the American Expeditionary Forces (as American troops on the Western Front were called) landed with General “Black Jack” Pershing who, not long before, had led American forces at New Mexico’s border in the American Punitive Expeditions, pursuing Pancho Villa.

I began my research by starting in the collections and archives at the New Mexico History Museum, picking up where former curator Meredith Davidson left off. The Fray Angélico Chávez History Library holds dozens of letters from John Brockman, a young New Mexican who served overseas. Brockman, drafted as a private, grew up in the small town of Mills in Northeast Harding  (now Mora) County. The letters to and from Brockman and his family reveal a young man who worked on a farm and at the local post office before he was sent off to a faraway war to encounter the horrors of trench warfare. They also reflect what Brockman’s home meant to him, and to so many other New Mexicans who served, in his constant references to what he missed, and his eagerness to be “home for the harvest.”

As I read through his letters, I aligned the dates of letters with larger events of the time, and began to match personal or localized experiences to the wider story of the war. For example, on September 30, 1917, while still in training camp, Brockman wrote: “Send me cakes as often as you can. I did not know that I could eat so much cake. I have bought several cakes here but they are not like the cakes you and Sis can make. I sure would have liked to had [sic] a cake this morning.” It inspired me to do research on food, and its shortage, during World War I. Although bakers back home faced shortages of ingredients including flour and sugar, the treats they shipped to the solders no doubt were an improvement on what those soldiers ate every day. Fruitcake, a hearty cake preserved with rum, was especially likely to survive the journey to the front lines. A later letter dated March 12, 1918, finds Brockman still at training camp, not long before he shipped out. He wrote, “I am still in Ft Riley and guess I will be for some time. We get about Ready to go out of here and the Dr. suspects some one is going to be sick so they quarantine us for a week or so.” The letter refers to an outbreak of the Spanish Flu, which was the largest epidemic the world has yet seen. The outbreak began on March 4, 1918, at Fort Riley,  Kansas; as many as 500 soldiers were hospitalized within the week. The Spanish Flu spread around the world and killed as least 50 million people, more than the death toll of World Wars I and II combined. Over 1,000 New Mexican died from the illness.

The exhibition includes Brockman’s uniform, as well as photographs of Brockman from his time in training. His tunic, made of thin, rough wool, told me of the discomfort a private in uniform could encounter. Its brass buttons read “The Art Metal Works, Newark, N.J.” I was able to track down the history of that company. Founded in 1898, the company made lamps, inkwells, hood ornaments, and safety matches—and apparently, during the war, buttons. Later, the company would become an important manufacturer of disposable lighters, which conveyed how a company that provided supplies in the war effort strengthened its prospects to grow afterwards. Something as small as a button can reveal a whole world.

New Mexico, at the beginning of the new century, had many incredible small-town newspapers. They may not have always given the most accurate accounts, but when read today, they offer a concise and often surprising and touching view on specific moments and places. Roy, New Mexico’s The Spanish American revealed that Brockman was top of his class, captain of the basketball team, was at one point selling a “good second hand cob pipe, good as new”; he apprenticed in the barbershop, delivered mail, and courted a young woman on his mail route.

Along with details about Brockman, newspapers revealed that a large number of New Mexicans had served in the war. New Mexicans ranked fifth in the nation for military service; just over 17,000 recruits came from all thirty-three New Mexican counties. The demographics of New Mexico’s World War I military contingent reflect the diversity and singular history of the state.

Most of the soldiers came from rural areas, and many, if not most, were Hispanic. At the time the United States joined the Great War, anti-Mexican sentiment was very high. Reasons for this included violence from the Mexican Revolution spilling over into New Mexico and Texas, as well as the Zimmerman telegram, which shocked and outraged many, in which the Germans asked Mexico to join the war on their side with the offer of reclaiming lost territory, including New Mexico. In response, the U.S. created the Camp Gordon Plan, a program designed to assimilate immigrants into the military. The program included language training for non-English speakers at Camp Cody, near Deming, New Mexico, where bilingual officers taught roughly 600 Spanish speakers enough English to serve during the War. Genealogy records as well as military records were crucial in recovering the stories of the soldiers who came from New Mexican families, many of them spanning multiple generations.

Native Americans, of New Mexico as elsewhere, also joined, even though the U.S. had not yet granted citizenship to most Indigenous people. Native American soldiers from New Mexico, including Pueblo, Navajo, and Apache, served in integrated units. Native American men who fought overseas were often put on the front line, serving as scouts—however, as one Albuquerque Journal article of July 25, 1918 relates: “many of them hold commissions and many more are non-commissioned officers. They are in every station of defensive service side by side with the white man.” Information on Indigenous New Mexicans who served, in addition to being found in archived newspapers, came from the state archives, but also from records from Carlisle Indian Industrial School, in Carlisle, Pennsylvania, the largest Indian boarding school in US history, and the archives of Joseph K. Dixon at the Mathers Museum of World Cultures. Dixon, a Baptist Minister, undertook the documentation of Native American life, including during World War I.

African-American military units known as Buffalo Soldiers were deployed on the Mexican-American border throughout the war. It’s little-known that the border played a significant role both from the threat as gleaned from the Zimmerman telegram, and the incident of striking miners from Bisbee, Arizona, being illegally deported to New Mexico at the border at the very beginning of the war, reported in bombastic terms in the newspapers of the day. By March 1917, nearly 1,500 Buffalo Soldiers were stationed at Camp Furlong, just south of the railroad tracks of Columbus; that number tripled in the next three years. At the time, Columbus was home to the largest African-American military community ever to reside in the American Southwest. The Buffalo Soldiers were mostly recruited outside the state, but many male residents of Blackdom, an all-black settlement near Carlsbad, also served.

Another rich source of information turned out to be 1919 editions of El Palacio, when most of the troops had returned home. In 1917, Presbyterian minister-turned-historian Lansing Bloom was hired at the Museum of New Mexico, where he worked with Paul A.F. Walter, founder of El Palacio. Directly after the war, Bloom was put in charge of the Museum’s War History Service, responsible for compiling the 16,000 service and biographical records of New Mexico’s veterans, a collection that was a focus for much of the research for this exhibition. Bloom’s work with the War History Service, and his connection to Walter of El Palacio, led to a series of obituaries published in 1919 in El Palacio of New Mexican servicemen who died while in the army, during the war or soon thereafter. Some of these are featured in the exhibition.

Scouring archived documents, newspapers, back issues of El Palacio, and photographs, I found the stories of various and diverse New Mexicans, each playing unique roles in the war effort: women in New Mexico’s Land Army, a national volunteer organization of women who ran farms in the absence of men gone off to war, who saved the apple harvest in Otero County; two brothers, descendants of Davy Crockett, one of whom joined the Army, the other the Navy; the grandson of a Santa Fe merchant for whom Don Gaspar Avenue and Ortiz Street in Santa Fe are named, who had fought for the Union, for New Mexico Territory, during the Civil War; future governors of Santa Clara Pueblo and Jemez Pueblo, as well as the grandfather of a future governor of New Mexico; Pueblo women working with the Red Cross to bring “the boys” fruit, cigarettes and handkerchiefs; those who would be awarded some of the highest honors for bravery in the war, and those who died in the war, to be buried in France and never to return to New Mexico.

Many great accounts of World War I can be found, including of New Mexico, but when diving deep into the archives and scouring the newspapers of the day, a rich tapestry of amazing individuals and communities emerges. I am glad that I’ve met these New Mexicans, across the bridge of time, and that I’ve been able to bring them to you.

Devorah Romanek is an anthropologist and museum curator who is currently curator of exhibits at the University of New Mexico’s Maxwell Museum of Anthropology.