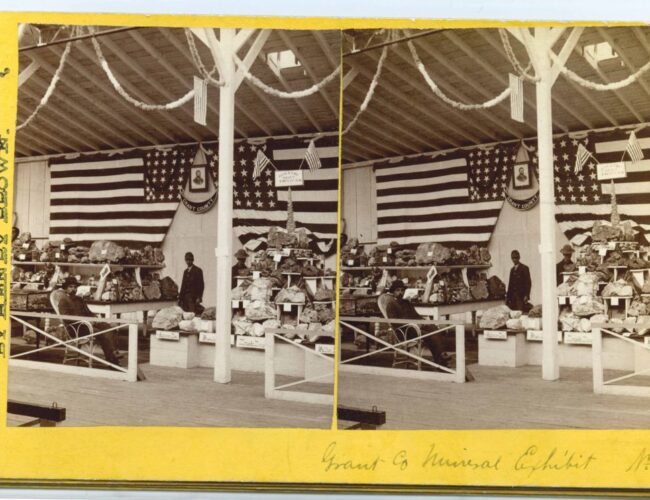 Before there were any museums in Santa Fe, civic boosters presented what was likely the very first organized public exhibition in the city. Opening in July of 1883, the Santa Fe Tertio-Millennial Celebration and Exposition was organized as a way to promote economic development in New Mexico. Mining and industry were among the main attractions. This grand month-long event included Native American dances, historical reenactments, horse races, agricultural displays, band concerts, and a celebrated mineral exhibition.

The fundamental premise of the event was based on an error, with organizers promoting it as a celebration of Santa Fe’s 333rd birthday—one-third of a millennium. Believing that the city originated in 1550, they were unaware that Santa Fe was actually founded some 60 years later.

Of the many attractions, the New Mexico mineral exhibition received the most favorable press coverage, with over-the-top reports about the fine specimens of ore and precious metals from nearly every county in the state. An article in The Santa Fe New Mexican proclaimed, “The most important event, in a material point of view, that has occurred since the advent of the Railroad, is the establishment of the Permanent Territorial Mineral Exhibit in the Exposition Building in this city.”

Afterwards, sections of the mineral exhibition were kept intact and donated to the Historical Society of New Mexico, placed on exhibit in 1885 in the Palace of the Governors.

David Rohr is the curator of On Exhibit: Designs That Defined the Museum of New Mexico at the New Mexico History Museum.