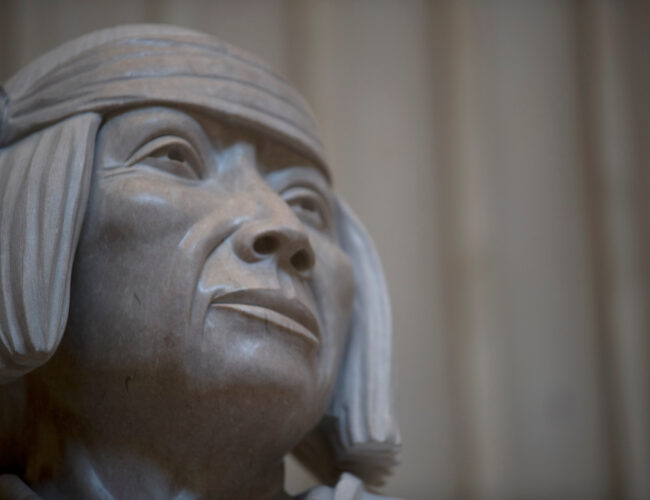 Almost all of decades of meetings and visits with Herman Agoyo in New Mexico involved some kind of food. On lucky days for me, he would share something delicious with green chiles he and his family planted and harvested in that perfect mile-high altitude, mineral-rich soil and rare earth elements of lands and waters at the Rio Grande and Chama Rivers of northern New Mexico: Ohkay Owingeh, the Place of the Strong People.

In 2003 and 2004, when we worked on the final details regarding the statue of Popé, the hero of the 1680 Pueblo Revolt, our most serious discussions took place after official sessions—you know, those meetings after the meetings where the best ideas and plans are hatched. I would join Herman and his longtime friend from Kewa Pueblo, Bennie Atencio—the two leaders and organizers started working together for Pueblo land and water rights as community action directors in the 1960s.  Sometimes joining the select group was their younger friend and mentee, New Mexico Senator Benny Shendo (Jemez Pueblo), who then was the first cabinet secretary of the first Indian affairs department in any state.

And where would those most important meetings take place? Furr’s Buffet in Santa Fe. There, in a strip mall near the main road in or out of town, is an old-timey cafeteria, then complete with a shelf of metal pipes for sliding those huge polystyrene trays past metal bins holding the ultimate selection of comfort food. Mashed potatoes? You got it. Roasted corn on the cob? Coming right up. Salad and a rainbow of jello cubes? Congratulations. Pico de gallo and guacamole? You betcha!

The people who served whatever odd combinations you asked for and steered you toward the freshest choices smiled and said “Enjoy your day” and “You’re most welcome” and “Can I get anything else for you?” in a way that you believed it. They had the humility, kindness, and working hands of our relatives, and we felt at home.  There—amidst the callouts to the kitchen, the clanging of indestructible tableware, and the sounds of children being themselves—we would eat and meet and solve all the problems we brought with us, energized by table service of seemingly endless coffee, iced tea and pop refills.

It was at Furr’s that Herman and his loyal back-up group figured out how and when to move the Popé statue from sculptor Cliff Fragua’s Jemez Pueblo studio to Santa Fe, and then to its homecoming ceremony at Ohkay Owingeh, after which the marble Popé would be imbued with the spirit of the culture hero himself. Because the statue was a living being, Popé required extra layers of care, treatment, prayer, and security, far beyond those needed to protect an ordinary work of art during storage, travel to Washington, DC, and installation in the Statuary Hall Collection in the United States Capitol.

It was at Furr’s that we helped Herman think about additional members for the Popé commission and fundraising panels, when state regulations precluded him from chairing both. Later, one of his adult children, the brilliant and beautiful Pamela Agoyo, director of the University of New Mexico’s American Indian Student Services, replaced Herman as commission chair.

After our next commission meeting, Pamela suggested that we go to lunch, and we all said we’d meet at Furr’s. “Furr’s?” she gasped, and offered to pay for our lunch elsewhere, thinking that we suggested going there out of necessity. Once there, she could see that we were comfortable and actually liked the food, which gave us all a good laugh, but she said we were on our own for future cafeteria meetings.

Herman’s late-1970s vision of Popé in the US Capitol grew out of our work with national movements to end “Indian” mascoting and the stereotyping of Native peoples during the “Indian” costume season, from Columbus Day and Halloween to Thanksgiving.

The greater Pueblo effort was to shift focus from the legacy of the Conquistadors to true representations of Native cultures and histories, and Herman was at the forefront of ending the name of colonization, San Juan Pueblo, and reclaiming the traditional Ohkay Owingeh.

Herman was a big part of The 1992 Alliance, a three-year project on the occasion of the Columbus Quincentenary, which culminated in an important gathering at Taos Pueblo. There, one hundred wisdomkeepers, artists and writers spent four days focusing on the theme “Our Visions: The Next 500 Years,” and never mentioned the lost explorer.

Our collective efforts were not just to vanquish stereotypes, but also to replace them with accurate representations, both historical and contemporary, and to lift up our own heroes and role models. That overarching purpose made the goal of sending Popé to Capitol Hill even more important. Through similar projects up and down the hemisphere grew the goal of establishing Indigenous Peoples Day, and it is no wonder that New Mexico was one of the first states to ditch Columbus for Indigenous Peoples Day.

I think the secret of our many political and policy successes have been the small and large gatherings of Native peoples inspired by our cultural strength and fueled by the Furr’s and green chile foods of our old countries.