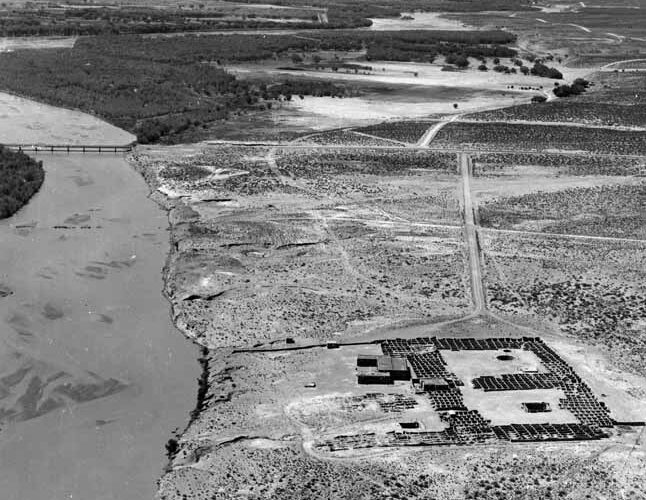 Almost eighty years ago, Coronado State Monument, now Coronado Historic Site, opened on May 29, 1940. At the time, much of the area surrounding Coronado Historic Site was undeveloped. Prior to the installation of Cochiti Dam, the Rio Grande Flood Plain was still active. The river was also much larger and wider.

This aerial photograph, by Sargent Fullerton in around 1946, faces south. In it, the reconstructed adobe ruins of Kuaua Pueblo with its three major plazas and the visitor center designed by John Gaw Meem are clearly visible.

The white speck across the Rio Grande River in the far distance appears to represent light reflecting off a water tower owned by the New Mexico Land & Timber Company. It was part of a large mill complex which dominated the Bernalillo landscape during the early twentieth century. At the time the photo was taken, the plane appears to have been flying above the railroad line that connected the mill to its logging operations in the Jemez Mountains.

Much closer and easier to distinguish in the image is NM 44. Established in 1940, this road ran northwest from Cedar Crest to Aztec, New Mexico. US 550 later replaced the old two-lane highway. Remnants of the highway’s old bridge across the Rio Grande are still visible at Coronado Campground today.

Like US 550, the campground did not exist at the time the image was taken. The stone-lined square spaces visible in the photo are not tent pads, but rather represent the cobble foundations of a much earlier complex: Casa Quemada or Burned House. Casa Quemada was a Spanish encomienda, possibly established by the Montoya Family, to exploit Indigenous labor and cotton production at Kuaua Pueblo in the early seventeenth century. Natives burned the complex in the Pueblo Revolt of 1680 and it was never rebuilt.

Another major architectural feature is the adobe-walled area north of Kuaua Pueblo. Encompassing a small arroyo, this “ethnographic garden,” constructed by Works Progress Administration workers in 1939, was initially envisioned as a grand restoration of the original landscape, “requiring 10,000 cactus, 1,000 yucca, 500 juniper and 300 cottonwood,” but was downsized due to lack of funding. Today, it’s a scenic picnic area popular with hikers along Coronado Historic Site’s Primitive Trail.

Matthew J. Barbour is the manager of Coronado and Jemez Historic Sites.