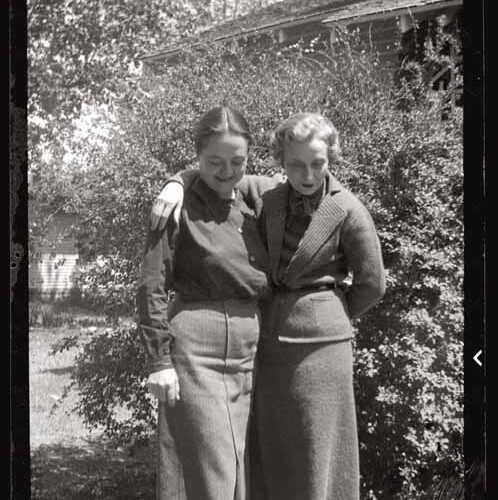 A friend of mine, Annie Sahlin, often comes in  to work on some of the materials she donated to the Palace of the Governors Photo Archives. Now and then, after seeing one of our posts on Facebook, she’d say, “Oh, I saw that photograph by Margaret. My grandmother, Isabel, was friends with Margaret.” She said it enough times that I asked her what she was really saying.

In the 1990s, Annie’s mother noticed a photograph in El Palacio magazine, in which Isabel and Margaret McKittrick were posed with Will Shuster and Oliver La Farge. Her mother sat Annie down and told her that her grandmother left her grandfather. She packed up her car and left Oklahoma for Santa Fe and for Margaret. “Is this true?” Annie asked me. I told her I would see what I could find.

The first thing I found was a 1945 newspaper story about the two women running a newspaper out of Española. It described them as “jodhpur-clad, pipe-smoking women.” Isabel also wrote a story published in the Saturday Evening Post, accompanied by a profile of their life together, though it does not describe them as anything more than domestic and business partners.

Margaret and Isabel both divorced their husbands around 1938. The divorces were mentioned in a biography of Isabel’s husband, Stanley Vestal. His biographer includes Isabel’s belief that Norman, Oklahoma “is poison to me” and her desire to be “an artist, not a household slave.” But, in taking Vestal’s perspective and relying on his letters, the biographer not only misses half the story, he portrays Isabel as hysterical. Vestal “blamed what he called Isabel’s psychotic condition brought on by menopause and anemia; and undue influence on her by her daily companions in Santa Fe who he said were ‘unhappy people who have failed at marriage,’ particularly the divorcée with whom she had been living since June.” Of course, that divorcée was Margaret.

There are many of these stories, but you can’t get to them easily if you are just relying on archives and written sources. Traces of them exist, but to find them, it takes care, and sometimes synchronicity.