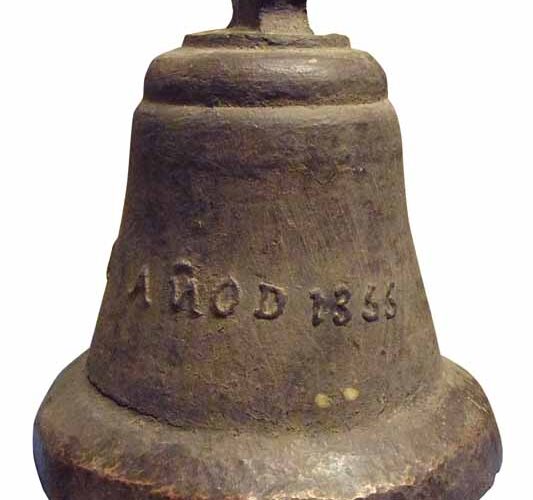 More than one bell has graced Acoma tower over the St. Francis Auditorium, ringing in key moments in the New Mexico Museum of Art’s history. These bells have their own stories to tell. One bell is steeped in myth wrapped inside a legend.

The Old Algodones bell rang from the top of the museum’s tower for the first time on November 23, 1917. Before arriving at what would someday be the New Mexico Museum of Art, the bell had already achieved distinction under another name: Maria Josefa. First introduced to the public-at-large during the 1904 Louisiana Purchase Exposition in St. Louis by New Mexico Territory Governor Miguel Antonio Otero, Maria Josefa drew the curious. Newspapers from coast to coast hailed it as the “Oldest Bell in America.” The bell’s inscription is “MARIA Josefa AÑO D1355,” although those who cast Maria Josefa inverted the “F” and transposed letters “S” and “E.” If metalworkers in Spain cast Maria Josefa in 1355, as the inscription suggests, the bell would pre-date Columbus’ sailing to the Americas by one hundred thirty-seven years.

The bell’s origin remained shrouded in story, yet its physical characteristics informed its tale and provided clues. Governor Otero recorded Maria Josefa’s origin story in his autobiography My Nine Years as Governor of the Territory of New Mexico (1897–1906). In his autobiography, Otero recounts how Francisco Vázquez de Coronado y Luján brought the Maria Josefaon one of his first expeditions from Spain to Mexico in 1540. The bell then accompanied Father Juan de Padilla and Coronado to New Mexico where it hung in one of the mission churches in the “Seven Cities of Gold” or “Seven Golden Cities of Cibola.” (According to legend, the Seven Cities of Gold could be found throughout the pueblos of the New Mexico Territory. The cities were Hawikuh, Halona, Matsaki, Quivira, Kiakima, Cibola, and Kwakina.)

Maria Josefathen accompanied Coronado and his men to their outpost at Gran Quivira in what is now Kansas, before returning to New Mexico to the Pueblo of Tiguex in Algodones. In 1542, Father Padilla’s guides killed him on the road from Gran Quivira to Algodones, and so Maria Josefa remained in the Algodones parish church where it stayed until that chapel crumbled to the Earth. It was then moved to a new church building.

In 1897, a new bell was needed for the school house belfry in Algodones. Governor Otero and County Commissioner Arthur Seligman purchased Maria Josefa from the Reverend J.M. Coudert of Bernalillo. Coudert used the money he received from the Maria Josefa sale to purchase the needed school bell. Coudert composed Maria Josefa’s history, claiming to have drawn it partly from documents and partly from the oral tradition of generations of descendants living the Rio Grande Valley. The Reverend’s account was the source of the bell’s history in Governor Otero’s autobiography.

Coudert assured Maria Josefa’s buyers that his tale was accurate, yet no supporting documents have ever been located. Did he embellish the bell’s history in order to drive up the selling price, or did he truly believe his own tale?

Even while the Maria Josefa’s renown was rising, people started to question its age. Measuring 23 by 18 inches and weighing 198 pounds, the bell would not have been an easy object to transport from Spain to the New World and then carry back and forth from Kansas to New Mexico. Shipping Maria Josefa from Spain would have also been unnecessary, especially since metalworkers cast bells in northern New Spain during the sixteenth century. On August 8, 1904, L. Bradford Prince, president of the New Mexico Historical Society, composed an editorial for The Santa Fe New Mexican about the bell’s history, requesting if “some reasonable limit can be placed on the imagination of writers on the Old Bell.”

Many similarities exist between the myth of the Maria Josefa and lore associated with the San Miguel Mission Bell. The San Miguel Mission, also known as San Miguel Chapel, is a Spanish Colonial mission church in Santa Fe, located near the Plaza on Old Santa Fe Trail. The Mission was built between approximately 1610 and 1626. Engraved on the side of the San Miguel Bell is what appears to be the date 1356.

Historians and scholars started to question the accuracy of the date on the San Miguel bell around the same time as they questioned Maria Josefa’s date. In 1914, historian Benjamin Read tracked down Clemente Ortiz, a Santa Fe native, who was twenty-five in 1856. Ortiz remembered the casting of the San Miguel bell. In historian E. Boyd’s formative 1974 book, Popular Arts of Spanish New Mexico, Boyd noted that “the dates of 1855–1856 coincide with those of several…New Mexican bells that may have been made by [itinerant bell caster Francisco] Lujan. All are thick walled and squatty, often defective in casting and predominantly of copper,” a description that aptly fits the Maria Josefa.

Another similarity between the stories surrounding Maria Josefa and the San Miguel bell was the claim from Otero’s autobiography that devout parishioners dropped gold, silver, and jewel ornaments into the flowing metal as smiths poured it into a mold. This claim is echoed in Willa Cather’s novel Death Comes for the Archbishop, as Father Joseph describes the casting of the San Miguel bell: “Yes, the inscription is in Spanish, to St. Joseph, and the date is 1356. It must have been brought up from Mexico City in an oxcart.…Nobody knows where it was cast. But they do tell a story about it: that it was pledged to St. Joseph in the wars with the Moors, and that the people of some besieged city brought all their plate and silver and gold ornaments and threw them in with the baser metals. There is certainly a good deal of silver in the bell, nothing else would account for its tone.”

Yet those who cast the San Miguel and Maria Josefa bells used modern Spanish with Arabic numerals. According to Boyd, the 1300 dates might have been innocent typos. “No church bell of the fourteenth century would have been lettered in anything but Latin and with Roman numerals,” she claims. “The numeral eight in the date on the San Miguel bell was defective in its casting and therefore resembles the numeral three.” Boyd’s book also notes the Maria Josefa was inscribed 1355 but that this date was defective and should have read 1855.

An 1855 casting would make it impossible for Coronado to ever have laid eyes on Maria Josefa. Charles Lummis, a writer, librarian, historic preservationist, and Indian rights activist at the turn of the twentieth century, once noted that “romantic falsehoods tend to survive while facts are ignored and forgotten.” While numerous historians through the years have agreed the controversy of the San Miguel and Maria Josefa bells have been laid to rest, the myths surrounding them continue. In an August 16, 1980 New Mexican article, Mike Webber, associate director of the Museum of New Mexico, asserted, “Just the possibility of two [1300s] bells arriving [in Santa Fe] is about one in a million. It’s almost impossible.” In the same article, priests from the San Miguel Chapel insisted the San Miguel bell dated to the fourteenth century.

After Maria Josefa rang for the opening of the Museum of Art in 1917, it remained on loan by request of Edgar Lee Hewett for ten years. Articles in El Palacio in the 1918 August and October volumes stated that Otero and Seligman gave Maria Josefa to the art museum; however, the bell remained their property until June 1949, when they gave the bell to the New Mexico Historical Society. Records of the gift still quoted the 1355 date, albeit with notations to its controversy.

Miscellaneous bells of little note resided in the Acoma tower until 1976; at the time, the tower held two bells. Don Strel, director of the Museum of Fine Arts (now New Mexico Museum of Art), became dissatisfied with the situation and wrote to John S. Reed, chairman of the board and chief executive officer of the Atchison, Topeka and Santa Fe Railroad. In the letter, Strel complained, “…One (is) without a clapper and the other…rings with a hollow clank.” Strel wrote Reed with the hope that the AT&SF Railroad would donate a bell from one of their locomotives “large enough to carry a good sound throughout the downtown area.” He argued that a bell from one of the trains would help remind residents of the importance of the railroad in New Mexico and Santa Fe. In December 1976, the AT&SF Railroad donated a bell to the museum from an F7 diesel locomotive, which served the main freight line primarily in Texas, Oklahoma, Kansas, and eastern New Mexico.

The AT&SF bell in the Acoma tower of St. Francis continues to toll for important events in the history of the Museum. On November 25, 2017, the bell rang again to open the museum after a ten-week renovation and to
celebrate the museum’s centennial birthday. Mike Delello, Department of Cultural Affairs deputy cabinet secretary, climbed to the bell tower to ring in the museum’s next one hundred years.

Michelle Gallagher Roberts is currently acting director and deputy director for the New Mexico Museum of Art. Previously, she was the head of registration and collections and has worked for the museum for over thirteen years.