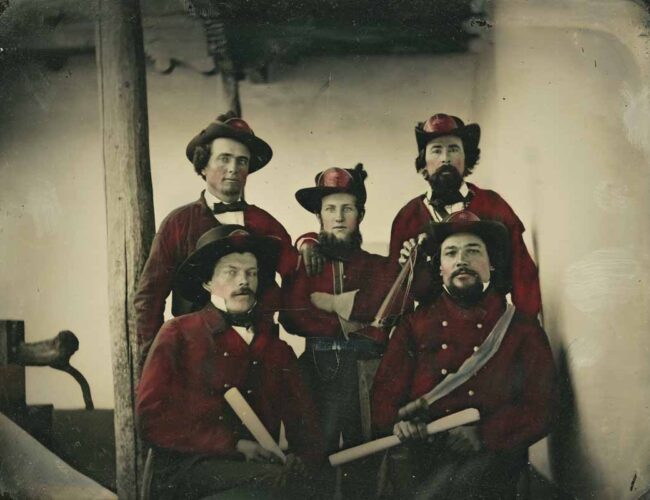 Photographs taken in the Southwest before 1866 are  exceptionally rare, which is why this stunning but unidentified quarter plate ambrotype—with vigas and corbels—caught our attention. Ambrotypes, collodion positive images on glass, became popular in the 1850s but were supplanted by tintype and glass negative processes by the mid-1860s. The cased image hadn’t aged well, but inspection by conservators suggested the problems were superficial. A new black backing revealed the emulsion’s pristine condition, and ghostly white highlights now pop against dark shadows and hand-painted red uniforms.

Who were these men? One holds a speaking trumpet, commonly associated with volunteer fire departments in the nineteenth century. Helmet front pieces also feature a bucket, a star, and perhaps another speaking trumpet. Like tintypes, many ambrotypes display backwards, laterally mirrored from their original orientation. Reversing the high resolution scan showed the letters “…FFC” on the helmet of the young man at center. Could this have been the Santa Fe Fire Company?

In fact, the territorial legislature approved a volunteer fire brigade called the Santa Fe Fire Company on January 26, 1861. The rolled documents and gavel, and the group photograph itself, may commemorate the occasion. The act of incorporation named nine men as founding members. I have been able to identify three of them in this image. The man holding the speaking trumpet is Reuben Frank Green, who had managed the Exchange Hotel on the Plaza. Charles Emil Wesche, best known for his role in New Mexico Militia battles against the Texans, is in the front left. Finally, with the star on his helmet and wearing a sash is Charles P. Clever, an immigrant, trader, lawyer, politician, and military official.

The founders of the SFFC weren’t just a mutual aid society. They sat at the nexus of influential networks with interconnected interests in military, judicial, and economic endeavors. The projects they started before 1860 changed with the shifting landscape of the Civil War. They were masons. They ran mail services, traded in wool, operated newspapers, and speculated in mines. It is often not easy to tell where their interest in community development ended and where their self-interest began.

Interestingly, Clever was also a founding member of the original New Mexico Historical Society in 1859. It’s fair to say that he’d be happy to learn that many years hence, after languishing in obscurity, this photo would grace the cover of the book New Mexico’s Palace of the Governors: Highlights from the Collections.

Hannah Abelbeck is the digital imaging archivist at the Photo Archives of the New Mexico History Museum/Palace of the Governors.