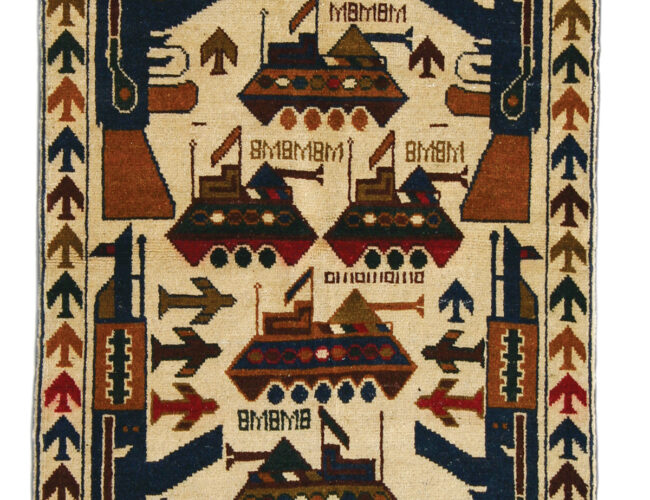 Unknown artist, war rug with tanks flanked by Kalashnikovs, Pakistan refugee camp; acquired in Peshawar, Pakistan, 1998. Knotted wool. 72 7⁄8 × 42 7⁄8 in. A long history of traders and invaders provoked some Afghan rug producers to add weapons and technology to their rugs.

War rugs are a unique genre of contemporary art that teach a wealth about Afghanistan, foreign involvement in the country, and the evolution of design. In contradiction to the historically collected Afghan rugs, which are valued for their uniqueness and their advanced age, war rugs are all about modernity, representing various types produced in Afghanistan and now Pakistan by local weavers and displaced craftspeople, and by refugees.

The illustrative exhibition Afghan War Rugs: The Modern Art of Central Asia, which made its debut at the Villa Terrace Decorative Arts Museum in Milwaukee, Wisconsin in the fall of 2013, opens at the Museum of International Folk Art in Santa Fe on January 12, 2020 as From Combat to Carpet: The Art of Afghan War Rugs. This collection of historic and modern war rugs addresses the creative nature of rug production in the region and provides a view into a dynamic market. Western interest in rugs and carpets from Afghanistan grew in the nineteenth century and has continued largely unabated despite civil wars, Soviet interventions, and foreign attempts to mitigate war. Following the recognition of the value specifically of war rugs by curators and non-traditional collectors, and given the presence of U.S. troops, this unique subset of the oriental rug market has grown.

Some of us know Afghanistan as the destination for hippie trips in the late 1960s and seventies, or as a place of modern war. The nineteenth and early twentieth centuries were punctuated by a series of Anglo-Afghan Wars, which led finally to independence from Great Britain, and then homegrown monarchical rule until 1973—after which time the first war rugs were probably produced. Geographic war rugs depict this history and reflect a broad awareness of global politics.

Which provokes the question: Why Afghan rugs, in particular?

A worldwide rug renaissance in the 1960s inspired many people not previously involved in weaving to work in the industry. The ideas of these newcomers brought about changes and a new openness to the art of rug-making. This, coupled with a long history of traders and invaders to the country, provoked some rug producers to add novel motifs and radically new images such as weapons and technology in the central panels, or fields, of their rugs. Artists and artisans are cognizant of the market for their wares; they created art reflecting their complicated political zeitgeist and important geographic location, and consumers and collectors responded enthusiastically.

According to Kevin Sudeith, a New York war rug broker and specialist, less than 1 percent of Afghan rugs have war motifs, making war rugs a distinct phenomenon worthy of art historical consideration. In fact, contemporary curators were among the first to show interest in war rugs and to understand their significance, the avant-garde nature of some compositions, and the artful use of charged imagery—not to mention the contrasts of traditional vs. novel, antique vs. contemporary, and craft vs. fine art.

In addition to major monuments and symbols of victory such as the Minaret of Jam (Afghanistan’s major historical monument), subjects such as military installation, airports, dams, and bridges are also part of the war rug culture, as they celebrate modernity and progress. Harnessing the country’s waterways helped electrify urban areas and improve people’s standard of living. The inclusion of military vehicles and weapons in rugs commemorating civil engineering projects is not uncommon; both sets of images relate to the modernization of the country.

As indicated by the inscription in Farsi, one rug presents two views of the Naghlu Dam near Kabul. The dam was a major endeavor financed and built by the Soviets in the 1960s. The inclusion of military vehicles and weapons in rugs commemorating civil engineering projects is not uncommon, as both sets of images and motifs relate to the modernization of the country, as well as economic and societal progress.

An excellent example of how and why war rugs are arguably synonymous with the advent of modernism is apparent in a war rug with helicopters from western Afghanistan. On first glance, this is a traditional rug in every respect. The central field consists of three decorative göls (medallions), each surrounded by elements that look like a droplet-shaped motif known as a boteh—but on closer inspection, these are actually helicopters, an element arguably ubiquitous in Afghanistan following years of international military investment following World War II. Creative rug makers, like the Baluchi of western Afghanistan, introduced this type of motif into their otherwise familiar patterns, and then sent them to town to test their market potential—which proved significant. Such a rug is arguably a cross between a craft spurred by the marketplace and an independent work of art.

While defined as any carpet or rug which contains a war motif, this definition of war rugs misses the broader impact of the revolution in design. A more faceted definition takes into account the multicultural tribal nature of the country, tourism and trade, the entrepreneurial character of the Afghan people, their exposure to the West, the unending conflicts between warring factions, and an embrace of modernity. A unique product of Afghanistan and its rich history, war rugs document the Soviet occupation, puppet regimes, and machines of war, yet are an economically sustaining craft for many.

War rugs also feature world maps, political portraits, international cityscapes, and armaments such as tanks, helicopters, and antiaircraft missile launchers. Older rugs featuring machinery with the inscription “U.S.S.R.” leave no doubt to the identity of the occupiers. After September 11, 2001, weavers expanded their repertoire to include American military machines, dollar bills, images of the World Trade Center, and doves with olive branches uniting nations, among other motifs.

Similarly, we see the evolution of a pictorial rug into more dynamic contradictions as weavers make modifications in their designs. In the exhibition, this is best seen in two pictorial rugs featuring a group of geisha playing instruments. The rugs, while appearing simply pictorial, upon closer investigation are, in fact, war rugs. The shamisen (Japanese guitar) played by the figure in an earlier rug morphs into a machine gun, while what appears to be an innocent walking stick becomes a bazooka, or anti-tank weapon. Even facial features change from more realistic to geometrized and depersonalized, as geisha become soldiers.

Geographic map rugs are particularly telling. Like a Western mapmaker, Afghan weavers place their country front and center, and many speak to a heightened sense of the geopolitical importance of Afghanistan. For thousands of years, the country has been part of the famed Silk Road, a network of trade routes connecting China to the Mediterranean. A vast and varied expanse with mountain ranges and desert areas, Afghanistan covers over 250,000 square miles, only slightly smaller than the state of Texas. Completely landlocked, it borders six different countries—Pakistan to the south and east, Iran to the west, Turkmenistan, Uzbekistan, and Tajikistan to the north, and part of China to the far east. At the crossroads of so many civilizations, Afghanistan has long lured travelers from around the world. It has been a nexus of ideas and trade between East and West. Powerful conquerors, from Alexander of Macedon to Genghis Khan, have fought over the country, known to be relatively easy to invade but difficult to conquer.

Although it is often said that weavers began adding war motifs following the 1979 Soviet invasion of Afghanistan, some scholars have found war rugs that predate the Soviet occupation. According to the Italian curator Enrico Mascelloni, who has studied war rugs in Afghanistan and throughout Central Asia, images of planes and weapons appeared earlier. The first war images were “confined to the rugs’ borders or arranged as small icons around a central image—often a world map, the portrait of a [tribal leader]….Weaponry was either absent, or secondary, and often practically camouflaged by the concentration of other iconic designs. It was the modernity of their subjects that [has] guaranteed some cohesion with other truly ‘armed’ rugs.”

If we look at history for an answer, an important watershed was the coup d’état led by Mohammed Daoud Khan, former prime minister of Afghanistan, in 1973. It led to the abolition of the monarchy and the formation of the Republic of Afghanistan. Both nationalism and modernization of the country followed. Afghans began to reflect on the country’s past and emulate those who earlier had agendas similar to the current and new leadership. In an act of quasi-historical revisionism, the past was, and continues to be, used to help define the future.

Following Daoud’s coup, weavers began depicting King Amanullah Khan (1892–1960), likely because he was the first modern leader of Afghanistan to have introduced a written constitution, an independent judiciary, Western dress, and education reforms. In this collection, the portrait rugs of Amanullah Khan from the 1980s are examples of the people’s admiration of a past leader during an era of reforms. Khan, who ruled Afghanistan from 1919 to 1929, is still highly regarded by many because of his modernist reforms and victory over the British in the third Anglo-Afghan war. As in his official portraits, in rugs he appears full-length in military uniform, and as a show of strength, weapons reinforcing his military legacy sometimes surround him.

Unmanned aerial vehicles (UAVs) are the latest feature in the design of Afghan war rugs; another nod to modernity. Their inclusion in hand-woven rugs is testament to the constant search for novel design ideas that now characterizes the rug-making markets in Afghanistan and Pakistan, among other countries. Just as military equipment from the United States (F-16s and Abrams tanks, for example) and the World Trade Center in part replaced images of Soviet hardware, images of drones in rugs date and contextualize each work.

While drones—first used in the late 1960s and seventies—have been employed in Central Asia since 2009, they are only first observed in rugs in 2014, making them not only contemporary in date but also modern thematically. And because of their modernity, drone rugs are now capturing the attention not only of collectors but of U.S. service men and women, foreign soldiers, NGO and aid-workers, and travelers—most of whom are not concentrating on age or knot-count as they build their collections.

Annemarie Sawkins, PhD, is an independent curator, art historian, and art consultant currently working on a major survey of art in Wisconsin. Her traveling exhibitions include nevertheless, she persisted: Prints by Modern and Contemporary Women Artists and Modern Rookwood, among others.