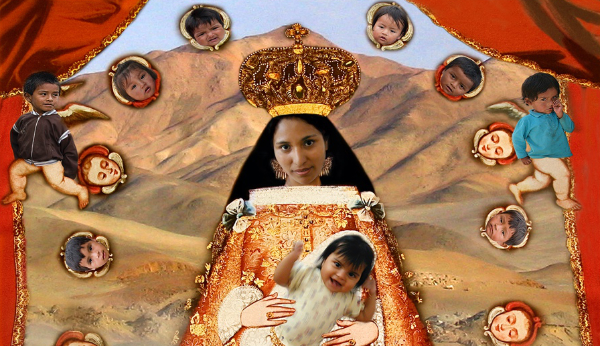 In recent years, interest in Perú and all things Peruvian has increased at a rapid rate around the world. Llamas are everywhere in popular culture and home décor. Traditional weaving patterns and other elements of Andean fashion are featured sources for contemporary style magazines. In part thanks to a 2005 Bon Appétit feature edition, Perú’s culinary contributions have gained a large following among global foodies.

Correspondingly, the country’s export sales of pisco (traditional grape brandy and a key ingredient in Perú’s national cocktail, the pisco sour) have grown 168 percent in the last five years. Tourism to the country has increased so much that the government is considering the establishment of an airport between Cusco and the UNESCO World Heritage Site of Machu Picchu. While the construction project is controversial and contested, it focuses a contemporary spotlight on the issue of balancing the Peruvian present with its past; particularly as the country approaches the bicentennial of its proclamation of independence in 2021.

These trends are part of the inspiration for the National Hispanic Cultural Center (NHCC) Art Museum’s most recent major exhibition, El Perú: Art in the Contemporary Past, currently on display in the gallery through May 31.

Peruvian artists have produced significant visual culture for centuries. Yet, when one thinks of Perú, usually the first thing that comes to mind is the country’s past, el pasado, including pre-Colombian ceramics, Andean ruins and other ancient sites, Colonial religious paintings, and artesanias, or folk arts. Both the pre-Colonial and Colonial past provide incredible historical richness and cultural context for understanding Perú today. From the artists of the Moche culture (active 1 to 800 CE) and the Inka Empire (flourished 1425 CE to 1532 CE), to the Cusco School of Spanish Colonial painting (active 1532 to 1821), to the costumbrismo style popularized by Francisco “Pancho” Fierro (the 1830s to the 1860s), and the indigenismo movement founded by José Sabogal (1888 to 1956), to one of the first Peruvian post-war abstract painters, Fernando de Szyszlo (1925 to 2017), Peruvian artists have contributed significantly to the world’s art historical record.

Yet it is often easier and more comfortable for a visitor to see only the idealized, romanticized past of a nation, rather than how the layered complexity of culture, influenced by the past, plays out in the present. Peruano artists are only seen as contributing to the past rather than having a global impact though contemporary visual culture and art.

Artists with deep connections to Perú are highly aware that the Indigenous pre-Colonial past and post-Colonial present are  simultaneously present in Peruvian identity—thus, the idea of a “Contemporary Past” for this exhibition. Each of the four featured artists in El Perú: Art in the Contemporary Past (Baldomero Alejos, Ana de Orbegoso, Lorry Salcedo, and Kukuli Velarde) acknowledges this in their work as they traverse across visual history. They engage their communities in revisiting history, and they each perform a critical role in a continuum of visual culture as well as in the artistic heritage of Perú. The work of each artist connects to the next. For the purposes of this article, each is introduced in order of appaearance in the physical exhibition space at the NHCC Art Museum.

Together, the incredible works of these four artists reveal the history of art and the art of history and spotlight the significance of Perú’s visual culture—and, in doing so, honor yesterday, today, and tomorrow.

Kukuli Velarde creates ceramic and multimedia works that revolve around the consequences of colonization and colonialism, as well as contemporary Latin American culture. Through various materials, she visually investigates aesthetics, cultural survival, and inheritance; she writes of her work: “In 2012, an exhibition of my work in Lima surveyed the last ten years of my career to that point. Peruvian audiences saw themselves reflected in the work, and the exhibition stimulated conversations about race and inequality right there on the spot. It also got the attention of art students, for it confronted Western ideals and aesthetic paradigms foreign to our own understanding of self.”

Velarde has been working on a series of works titled CORPUS: Contemporary Art and Historical Identity. The El Perú exhibition features six of her large-scale ceramic sculptures, based on Catholic icons from the Feast of Corpus Christi in Cusco (celebrated every year sixty days after Easter Sunday), along with accompanying video and corresponding traditional embroidery banners.

Velarde thoroughly researches the traditional materials and techniques of Peruvian pre-Columbian pottery styles in order to create her contemporary works in homage to the artists before her. CORPUS narrates the history of Perú, incorporating pre-Columbian and Colonial-era sensibilities, visually mimicking syncretism within a contemporary viewpoint. Colonization and colonialism have, for centuries, forced populations to dismiss, among other things, their regional aesthetics, including their understanding of personal beauty. Velarde feels that as a consequence, there is a pervasive belief that a universally pleasing aesthetic exists, though it is actually rooted in European canons of beauty that do not correspond to all populations.

Baldomero Alejos was born in Amaupata, a village of Santiago de Chocorvos in the department of Huancavelica. He was the youngest of seven children in a family of shepherds and potato and barley farmers. Orphaned at the age of six, Alejos and one of his brothers went to live in the department of Ica, where they worked in the vineyards of the Cabildo hacienda. In the 1920s, Alejos moved to Lima, apprenticed with photographer Diego Goyzueta, and later opened his own studio in the now-trendy Barranco neighborhood.

Around the age of twenty-two, Alejos moved his studio to Ayacucho (also known as Huamanga in Quechua), an important city in the Andes some 340 miles southeast of Lima. There, Alejos photographed the town and its people, recording history as it happened. He was known for his studio photography and created images of families from different socioeconomic backgrounds, featuring all with equal respect. Layered in meaning, the portraits reveal the twentieth-century moments when Ayacucho stepped into modernity. At the same time, Alejos’s images also portray the past and vernacular traditions. His subjects wore both European-inspired garb and the traditional Indigenous dress of the region. When Alejos took his camera outside to photograph, he documented everything from dignitaries and sports teams to religious processions and new highway construction. He used only natural light, both in his studio and outside. Each time he created a portrait, Alejos would hang a copy in his studio window for the community to see.

Alejos’s images are significant because he chronicled a revered community before the 1980s and 1990s when the radical-left Shining Path, or Sendero Luminoso, and military forces fought for control of the region in a civil conflict that resulted in the death and disappearance of more than 60,000 people. Alejos passed away just before the Shining Path took hold. During this violent time, Alejos’s son Walter and his sister Nelly hid his archive, protecting it for future generations. In doing so, they preserved the past of a traumatized region.

Today the archive resides in Barcelona, Spain, and consists of more than 60,000 negatives and prints, as well as documents compiled by Alejos between 1924 and 1975.

Through his work, photographer and filmmaker Lorry Salcedo explores his Peruvian roots and the varied intersections of African and Indigenous identity and experience. Salcedo studied cinematography at Armando Robles Godoy’s academy in Lima (1981), film production at New York University (1987), and digital cinematography at the New York Film Academy (2004). Among his many films, Salcedo directed and produced Amazonian Rainforest (2007), a documentary history of the Jewish immigration to the jungle of Perú during the nineteenth-century rubber boom. Salcedo is also the founder, director, and curator of the New York Peruvian Film Showcase, an annual film festival that has been held at the Instituto Cervantes of New York since 2010.

Salcedo’s photographic images featured in the El Perú exhibition are drawn from Mitos (Myths), Retratos (Portraits), and Afroperú, three components of the artist’s series Myths of Imagination. About this body of work, Salcedo says:

What I show in Myths of Imagination has been greatly influenced by Memoria del Fuego (Memory of Fire), Eduardo Galeano’s classic trilogy recounting the history of the Americas from pre-Columbian times to the twentieth century. Using this source of inspiration, my own fantasy, and characters that typify the daily domestic nature of the social panorama of Latin American urban society, I have represented the most striking elements of the complex cosmology of our ancient cultures.

Salcedo’s black and white images simultaneously evoke the past and the contemporary, connecting centuries-old ancestors to their present-day counterparts. His images relate the history of a multicultural Perú, a nation that, like its counterparts throughout America, is still in the process of recognizing the true richness and value of its own diversity. His visual explorations of what it means to be Peruvian highlight the similarities that unite us all as humans, regardless of ethnicity, gender, or nationality.

Ana de Orbegoso lives and works in both Perú and New York. Her interdisciplinary art practice explores different aspects of the individual and the social psyche through the use of popular iconography and staged situations. Her aim is to confront the viewer with a mirror that sparks recognition, thought, and memory.

The connection of huacos (a generic word for Peruvian pre-Columbian ceramics found in ancient sites) to Colonial paintings and contemporary Peruvian identity is a prominent characteristic of her work. Her Neo-Huaco series exemplifies this by demonstrating that Moche (northern Peruvian culture, which flourished approximately 100 to 800 CE) portrait jugs take on an entirely new sculptural persona when cast in sleek metallic glazes. They also come alive when the artist digitally projects a contemporary portrait onto the surface, thus establishing a continuum. This is all the more poignant, for the pre-Columbian examples of these ceramics were modeled after the community faces of that time.

De Orbegoso’s other body of work, Vírgenes Urbanas / Urban Virgins, is a photographic decolonization project that has been exhibited throughout Perú since 2006. Inspired by Colonial paintings from the Cuzco School (a distinct Andean style of painting by both Spanish and Indigenous artists during the sixteenth, seventeenth, and eighteenth centuries), she reimagines the works to reflect contemporary realities and ideals. These works mirror contemporary Peruvian identity that may not coincide with the ideals of conquest and colonialism. De Orbegoso’s use of printed vinyl banners allows the works to be processed easily by communities, and the project has visited more than thirty-three different regions of Perú as an ongoing traveling exhibition and performance with participation from local artists. Each work is accompanied by a poem by Cusqueño poet Odi Gonzales rendered in three languages: Quechua, Spanish, and English. The poems give voice to the figures as contemporary Peruvian women telling their own stories. Vírgenes Urbanas / Urban Virgins is the most locally exhibited art project in Peruvian history.

Dr. Tey Marianna Nunn is the director and chief curator of the art museum and visual arts program at the National Hispanic Cultural Center, as well as the curator of El Perú: Art in the Contemporary Past.