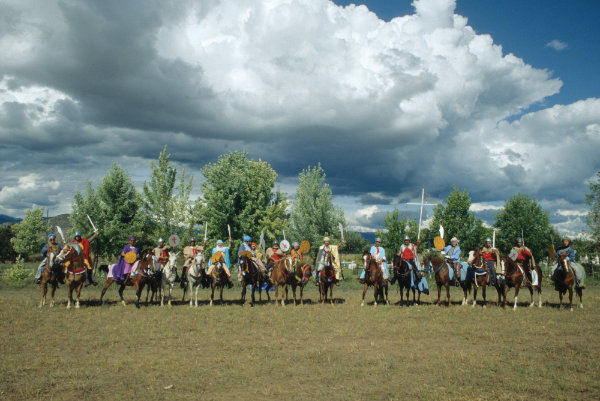 Prior to their arrival in the Americas, the Spanish people were already mestizo (mixed), and they brought varied age-old traditions with them to these lands. One such tradition is the reenactment and pageant known as Moros y Cristianos, which represents years of cohabitation, conflict, and cultural assimilation in Medieval Spain.

Between 711 and 1492 ACE, the Arab and Berber cultures of Northern Africa ruled and controlled most of the Iberian Peninsula. During this time, cultural assimilation and conflict existed side by side while Christian people from the north attempted to gain control of the land. The series of battles for control of territory, commonly referred to as the Reconquista, later gave rise to ceremonies, public dances, and mock battles to celebrate the reclaiming of lands for a growing Christian nation and shared cultural heritage. The last Moorish stronghold, the Alhambra in Granada, Spain, was defeated by 1492, after the unification of the kingdoms of Castilla and León with the marriage of Ferdinand and Isabella.

But even with the creation of a new Spanish nation, Arabic traditions and culture were present in the daily lives of Spaniards. The architecture, gardens, cuisine, music, fine arts, and language all contained elements of the Muslim past and led to the rise of a new hybrid Muslim/Christian artistic style referred to as Mudejar.

Moros y Cristianos reenactments and pageants began during the period of the Reconquista in Spain. These dances and festive community gatherings that represented the regional and localized battles were embraced by the local communities and lasted for centuries. The celebratory events synthesized various components of medieval pageantry: the representation of chivalry, themes of romance, use of the mock battle and tournaments to show strength and power, and dramatic and theatrical representations of historic events. Moros y Cristianos was accompanied by tilts at the ring, dramatic entertainment, and the running of the bulls. The first documented performance of the pageant was during the royal wedding of Ramón Berengure IV, Count of Catalonia, and Petronila, Queen of Aragón in 1130. The post-wedding festivities included a simulated battle between Andalusian Arabs and Christians that took place at the Cathedral of Lérida.

The tournaments and celebrations vary from region to region and among individual towns. Regional variations still exist today. In northern Spanish territories, masquerades are popular; in central Spain, spoken enactments are common. From the east coast into east-central Spain, the taking of the castle by the Moros is popular, while in southern Spain the Moros steal away a particular saint. The most elaborate performances on the eastern seaside feature ships arriving to storm the coast.

Today’s celebrations are multi-day affairs. All consist of two separate processions, one for the Cristianos and one for the Moros, which can last for hours. The town’s people dress in elaborate and often fantastical costume either as Moros or Cristianos from the Middle Ages. The celebrations generally take place at the same time as the honoring of the town’s patron saint. The final day is the day of the mock battle, usually fought on the main plaza or in an open field adjacent to the town. This is the day that a stolen saint is returned or the Christian soldiers regain control of the castle.

In many instances, local legend states the saint appeared during the final battle between the Muslims and the Christians. For example, the city of Bocairent honors Saint Blas and the battle that took place in 1358. The cities of Alcoy and Banyeres hold celebrations that date to 1276 and 1780, respectively.

Coming to the Americas
This tradition was brought to the Americas and was celebrated until quite recently in New Mexico, the final place being Chimayó. By the time the Spanish arrived in Mexico, the pageant had already become the symbol of the recently unified nation. As early as 1524-25, the first Moros y Cristianos pageant in the New World was included in celebrations in honor of Hernán Cortés.

After the 1539 peace treaty between Carlos I of Spain and Francis I of France, the Mexican viceroy Mendoza, together with Cortés and the royal Audiencia, agreed to hold a great pageant. That same year Moros y Cristianos was included in a grand celebration in Oaxaca. The tradition came to New Mexico in 1598 with the arrival of the Spanish settlers. Gaspar Pérez de Villagrá, in his Historia de la Nueva México (Alcalá, Spain, 1610), wrote of a drama produced for the first Spanish encampment on the Rio Grande in May of 1598. The play, written by Captain Marcos Farfán, depicted the battles and interactions that took place in Spain between the Andalusian Arabs and the Christians during the period of the Reconquista. The 1539 ceremonies were described as “tournaments and tilts with cane spears, running bulls, and mounted knights meeting each other,” and the 1598 pageantry was described as including “tilts with cane spears, running bulls and tilts at the ring.”

Mexican codices from this same period illustrated similar rituals of combat held among the Native tribes of Mexico. This might explain the quick assimilation of Moros y Cristianos. During the Colonial period, civil authorities in Mexico granted permits for whips and horse-riding to a growing number of Native tribes.

The next mention of Moros y Cristianos in New Mexico occurs in 1777, as documented by Fray Anastasio Dominguez. In New Mexico, the play is traditionally conducted on horseback and is accompanied by music and recited text, although music plays a minor role within the entire production. One version of the play represents the 1492 battle at Granada, Spain, when Castile and Aragon joined forces to end Islamic domination of the Spanish peninsula.

Curiously, in New Mexico the tradition of Moros y Cristianos served as a catalyst for a totally new play and reenactment that is considered the first play written and developed in the present-day United States: Los Comanches. This play is an account of events that took place between 1774 and 1779. Throughout the Colonial period, Spanish and Pueblo Natives were continuously invaded by the Comanches and other Athabascan tribes. The folk drama of Los Comanches tells of battles against and the defeat of the Comanche leader Cuerno Verde by both Spanish and Pueblo people. It is possible the original author of the first dramatization had actually been in the battle. Similar to the Moros y Cristianos battle scenes, Los Comanches is conducted entirely on horseback.

During the last third of the twentieth century, the reenactment of Moros y Cristianos was kept alive largely due to the devotion and research of Josie Luján. She, along with her husband Percy Luján, organized an annual reenactment in Chimayó and surrounding towns. Through painstaking research and dedication, the couple revived the original text and created new costumes, swords, and horse gear. Community members near and far, equestrians in particular, joined in the celebrations that took place on the feast day of Santiago (Saint James), July 25, in Chimayó, and throughout towns and villages during various fiestas in Northern New Mexico, including Alcalde and El Rito. The 1992 celebrations of the Cuatrocentenario, which celebrated the 400 years of European contact with the Americas, included the group from Chimayó to conduct the reenactment at the Smithsonian Institution’s American Folklife Festival.

Throughout the Americas and the Philippines the plays are accompanied with pageantry, fanfare, elaborate costumes, and marching bands, celebrating the rich multicultural history of the Iberian Peninsula along with native and regional characteristics unique to each location in which it is celebrated. Contemporary pageants and mock battles are celebrated throughout the region of Valencia in eastern Spain; Oaxaca and Zacatecas in Mexico; Peru, Puerto Rico, and, until the end of the twentieth scentury, in Chimayó. The event in Chimayó was heavily dependent on organizers Josie and Percy Luján, and when they and many of the cast members passed away, the tradition there died with them.

Though at first glance some may think the primary focus of the mock battle is conflict or war, these events actually celebrate a multicultural heritage that is still evident today in both Spain and in the Americas. Many words in the Spanish language are of Arabic origin, as is our acequia system, the adobe houses that make New Mexico famous, the horno, and even the sopaipilla. (Read this article to learn even more about the African and Arabic roots of New Mexican cuisine.)

The enactments of Moros y Cristianos represent remnants of our Medieval past, reminding us of the early Arabic and Mediterranean roots that influence who we are today.

Nicolasa Chávez, a fourteenth-generation New Mexican, is the curator of Latino/Hispano/Spanish Colonial collections at the Museum of International Folk Art. She co-curated the exhibition Música Buena: Hispano Folk Music of New Mexico with guest curator and folk musician Cipriano Vigil.