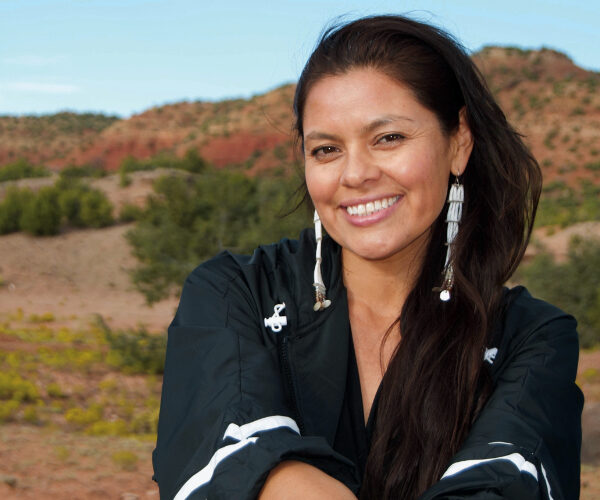 By Lillia McEnaney with Charlotte Jusinski

In the 1960s, potter Helen Cordero (Cochiti Pueblo) turned to her grandfather for inspiration. Known for being an engaging storyteller, Santiago Quintana was always surrounded by children. Cordero took the image of a seated figure surrounded by a crowd of little ones, avidly listening to a story, and sculpted it in clay. This “storyteller” figure quickly gained popularity, with potters throughout the Pueblos soon creating their own versions.

Storyteller figures continue to blossom and evolve with the next generation of Pueblo potters—including in the hands of 2020 Museum of Indian Arts and Culture Living Treasure Kathleen Wall (Jemez Pueblo). Today, as an established mixed-media artist, Wall creates figurative, expressive sculptures that bring joy and inspire conversation. Wall’s work will soon be on exhibit at MIAC in A Place in Clay; the exhibition has changed dates due to COVID-19, so contact the museum before you plan to visit.

Grounded in Jemez Pueblo, Wall’s whole ethos exudes a sense of place. Raised by a family of storytellers, she grew up surrounded by clay. “I was around eight years old, we were living in the Jemez Valley, and my mother [Fannie Loretto] was making a very large wedding vase,” Wall recalls. “There was a photographer there. … I remember pictures being taken and it being a really neat time. Then, in my mid-twenties, I saw the wedding vase for sale at a gallery in Durango, Colorado!”

Reconnecting with the vase was a pivotal moment for Wall. “Of course, I couldn’t afford it, but they let me put it on layaway,” she continues. “Now, I own that wedding vase. My mom has been such an influence in my work—she taught me everything. All of my earliest memories are of my aunts and my mom working. That is a wonderful memory that came full-circle.” And those early influences, Wall says, continue to play a major role in the work she creates to this day. “I always want to make sure that my family is a part of not only my work, but of my world, of my life. I try to embrace my family and make sure that we’re together often, because you can’t replace it. … These stories of my mom and my aunts making and selling pottery aren’t just memories. They are woven into the threads of my life.”

As she was honing her craft, she gained constant inspiration from her family—as well as a license to blaze her own path while staying rooted in Jemez. “My auntie Dorothy [Trujillo] always used to give me natural clay to work with, but one day she told me that I could use whatever I want—it didn’t have to be natural clay,” she says. “That was radical; it gave me the license to do what I could with what I had. Pueblo potters have a lot of rules imposed on them, but she took those away from me.”

Similarly, her aunt Edna Coriz taught her to make do with what she had. “Once, when I was in high school in Albuquerque, I didn’t have a brush for our white paint. So I tracked her down and asked if she had one I could borrow. She went into her purse, pulled out a makeup brush, and said, ‘Anything works!’”

For her relatives, working with clay “was almost like babysitting,” Wall reflects. “I see that clearly now because my kids are the same way. I need to work, so I let them play with clay, I let them get muddy. I was very fortunate to grow up like that.”

By the time Wall was fifteen, she was following in Helen Cordero’s footsteps, focusing on creating storyteller figures in her mother’s kiln. “It was illegal to have a job, but it wasn’t illegal to make pottery!” she laughs. Soon, she started travelling from Jemez to Old Town Albuquerque to sell her pieces. “I’d walk around with a basket of goods and just see who was willing to purchase.”

In her twenties, Wall left college to return to Jemez and take care of her grandfather, Louis Loretto, in whom she found constant inspiration. “I can’t even start explaining how much that experience influenced my work,” she says. “He was a rebel; he was very outspoken and accepting of a lot of things. He gave me a very grounding approach to my work—he gave me license to create.” Though Loretto was visually impaired, the pair travelled throughout the Southwest together, attending state fairs, powwows, and feast days. “Those experiences taught me so much not only about Pueblo culture, but also about so many other Native traditions,” explains Wall.

In between trips across New Mexico, Wall soon began rebuilding his house, pouring herself into the project, and “fall[ing] in love with him, and with Jemez.”

Taking this license to create to heart, Wall began adapting her storyteller figures into the work for which she is known—her koshare, or sacred clown, figures. Painted with the matte pigment for which Jemez potters are known, these jubilant, expressive pieces are almost always smiling, spreading joy to their viewers and owners. Wall created three koshare figures for A Place in Clay, a series titled Koshare Stars. Holding ceramic buckets of stars, the warm and welcoming figures greet visitors to the Museum of Indian Arts and Culture.

After experiencing significant success in the market and gallery scenes with her koshares, Wall started experimenting, moving towards more mixed-media works. “Sometimes, I can’t believe how much my work has evolved from a craft into a way of expressing myself,” says Wall. “My ambition is what made me leap into other situations, such as building Pueblo clay figures a lot larger than your average clay figure, or moving into installation art.” Ranging from bronze sculptures to ceramic figures embedded within or placed in front of paintings, these installation pieces illuminate new and innovative applications of Wall’s established talent in sculpture.

A Place in Clay puts the Koshare Stars figures into conversation with these larger, mixed-media works, which Wall often categorizes as her “project pieces.” In an effort to showcase the diversity of her artistic practice, the exhibition features selections from multiple bodies of “projects.” Visitors to the exhibition can explore the Place series, developed from a residency at the School for Advanced Research, and Harvesting Traditions, her senior thesis project at the Institute for American Indian Arts, which was previously exhibited at the now-defunct Pablita Velarde Museum of Indian Women in the Arts in Santa Fe.

The largest selection of work in the exhibition comes from Harvesting Traditions, which confronts questions surrounding Indigenous food sovereignty and pre-Colonial foodways. In her project statement, Wall writes: “In this body of work I explore the way Native people used to, and still do harvest, gather, grow, and hunt their food in a traditional manner. Reflecting on this traditional knowledge in foodways gives an opportunity to acknowledge the difference in how we practice our diet today.”

In A Place in Clay, the Pueblo Farmer is an extension of his surroundings. Carefully sculpted with hand-processed Jemez clay and painted with acrylic and earth pigments, he holds a hoe and stands in front of his corn field, a split-field painting. The foreground holds three monumental corn stalks within a larger agricultural landscape, and the bottom left mirrors this view, but this time the stalks are smaller, abstracted with traditional Jemez pottery motifs. The Rio Grande frames the top left corner, reminding the viewer of the lifesource for both the corn and the farmer.

Rabbit Hunter follows a similar path. Positioned in front of an expansive high desert landscape, the hunter is stretching, aiming his rabbit stick towards the cottontail on the opposite side of the canvas.

In these didactic, mixed-media pieces, Wall embeds ceramic figures within striking landscapes on canvas. Here, it is difficult to imagine the Pueblo Farmer without his well-cared for field, or the Rabbit Hunter without his desert landscape. Through this body of work, Wall hopes to start a discussion that “juxtaposes this past knowledge [with] what we practice today. Maybe in this discussion we can come up with ideas of compromise in traditional foods, in order to be healthier people.”

The exhibition would feel incomplete without Gye wha la’ pah (The Place Where I Began), which is a portrait of Wall’s auntie Edna Coriz as a young girl. From the Place series, this sculpture was based on a photograph of Coriz that Wall found in a newspaper clipping. The figure, sculpted with hand-processed Jemez Pueblo clay and painted with acrylic and earth pigments, is standing in front of a topographical painting of her neighborhood in Jemez, Gye wah la’. Though Coriz grew up away from home in San Francisco, she never forgot her home in Jemez. The painting and the sculpture come together flawlessly, with portions of the topography painted directly onto the figure of Coriz.

Over the years, Wall has faced criticism for not falling into the tropes of the “traditional” or the “contemporary” Pueblo potter. As a younger artist, she wanted to be seen as a “modern artist” because that is what the collectors, markets, and galleries were embracing. “But it turns out that I can’t change a lot of things about me,” she says. “I can’t change the way I look, my voice, my penmanship. It is what it is. I am not somebody else’s art. … My work is just what comes out of me—my art is everything about me.”

Beyond her individuality, art defines Wall’s family, culture, and home. “The creative side is grounded in Native culture, my surroundings, my family, and my friends,” she says. “Living in Jemez, which is constantly culturally active, you can’t help but be inspired. And then we live in New Mexico, where there is this incredible beauty everywhere we go, and I don’t take it for granted. My appreciation for beauty is fed by the culture I live in, the family I am surrounded by, and the landscape around me. It is undeniably heartwarming—we are constantly giving thanks in our dances and our songs. That is what inspires me.”

Through both her koshare figures and her multimedia works, Kathleen Wall has sculpted a place that is uniquely hers within the larger Native art world. When asked about creativity, Wall tears up.

“It’s absolutely everything,” she says. “It’s just what comes out of you—how you do your makeup, the clothes you wear, the music you listen to, the way you drive. It’s the way you see. Creativity is everything; we just have to acknowledge it.”

Lillia McEnaney is a museum anthropologist and freelance arts writer living and working in Santa Fe, New Mexico. She is the curator of A Place in Clay: 2020 MIAC Living Treasure Kathleen Wall, on view at the Museum of Indian Arts and Culture.

Charlotte Jusinski is the editor of El Palacio.