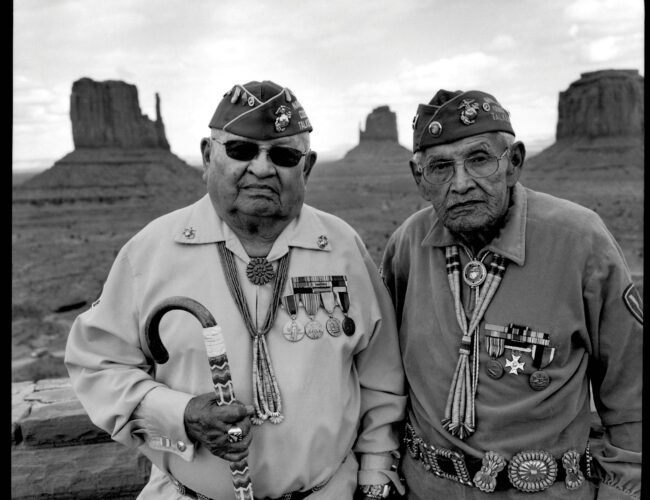 In a black-and-white photograph taken by Kenji Kawano in 2005, two Navajo men stand side by side at a Monument Valley overlook. Their heads are positioned in the gaps between the three famous buttes behind them—West Mitten, East Mitten, and Merrick. The brothers, Samuel F. Sandoval and Merril L. Sandoval, wear weathered fatigues and trifold Garrison caps heavy with silver pins. Marine Corps medals decorate their left breast pockets and they wear beaded turquoise jacla necklaces, concho belts, and ornate bolo ties. Like the buttes behind them, the mens’ faces have been weathered by time. The landscape and the brothers’ attire tell many stories, but their unflinching gaze intimates a history of hardship, courage, and pride. The photo is one of many in Kawano’s Warriors portrait series of the World War II veterans known as the Navajo Code Talkers.

Monument Valley is encompassed by the Navajo Nation. The famous buttes have served as a backdrop for many old Hollywood Westerns, many of which Kawano watched as a child in the 1950s in Gotemba, Shizuoka Prefecture, Japan. Kawano’s love of the stories of cowboys and Indians portrayed in the movies sparked his interest in the United States. As a child, however, he did not know the Navajo Nation existed, or that Navajo soldiers had fought in World War II. Kawano’s own father had been trained to be a human torpedo (Kaiten) pilot during WWII, but fortunately the war ended before he was deployed.

When Kawano graduated from high school he began working for a graphic design company, but soon gravitated to photography.

“When you do graphic design you stay in the office all day, but when you take pictures you go out and meet different people,” Kawano says. “So I bought a camera and started to go around the American bases like Yokota and Yokosuka because I wanted pictures of Americans.”

On November 10, 1973, the anniversary of the founding of the Marine Corps, Kawano left Japan to visit the U.S. He planned to stay for a few months to build a portfolio he could bring back to Japan for an exhibit. Kawano started out in Los Angeles, taking photos along Hollywood Boulevard, but he soon learned of the Navajo Nation and wanted to see it for himself. He hopped on a Greyhound headed to Gallup, New Mexico. Before long, he found himself working pumping gas at a station in Ganado, Arizona, where he took photos of children who were as curious about him as he was of them. Initially, he couldn’t speak English or Navajo, so the camera became a way to connect with young people. Over time, Kawano picked up a few Navajo phrases, and gas station customers would sometimes ask if he was Navajo.

While hitchhiking one day in 1975, Kawano received a ride from Carl Gorman, father of the renowned artist R.C. Gorman. Through conversation, Kawano soon learned that Carl had been a Code Talker in World War II and had been at the battles of Saipan and Tinian, among others. Gorman invited Kawano to a Navajo Code Talkers Association meeting, where he met other Code Talkers and learned about their role in the war. Later, when Kawano was hired as a photographer for the Navajo Times, he frequently accompanied the Code Talkers to parades and other events to document their stories.

In 1942, well into the war with Japan, the U.S. government began to recruit Navajo men to the Marine Corps to serve as messengers of classified information. The Navajo language was coded to thwart Japanese attempts at interception—and it worked. In particular, the Code Talkers are credited with victory at Iwo Jima. Navajo coding was faster and more efficient than codes the Marines had used before, and was impossible to crack.

As one Code Talker, Teddy Draper Senior, shared with Kawano: “When I was going to boarding school, the U.S. government told us not to speak Navajo, but during the war they wanted us to speak it!”

As he learned more about the Code Talkers, Kawano began to take portraits of them. He traveled for hours on dirt roads through the desert to find Code Talkers, and sometimes he got lost. The Navajo Nation is large—approximately the size of Ireland—and rural, and many Code Talkers did not have telephones, so finding them required patience and persistence. Kawano had plenty of both. And because he had married a Navajo woman, Ruth, in 1978, this helped him to earn the trust of many Code Talkers over the years. Most of them permitted Kawano to photograph them, but others were more wary.

“One guy said, ‘You are Japanese so you are my former enemy. You can take a picture, but I don’t want to give my information,’” Kawano recalled.

Not everyone felt this way, however. During one memorable visit to the Navajo Nation in 1990, Kawano’s father met Code Talker Carl Gorman. “They forgave each other,” Kawano said. “Mr. Gorman said, ‘War is between governments, not individuals.’”

Exhibits of his first Warriors series drew much appreciation from Navajo people and led Kawano to other Code Talkers he had not met. The positive response and his desire to document the Code Talkers’ contributions to WWII spurred him to create a book that would bring their lives and stories to people across the world. In 1990, Kawano’s book of black-and-white portraits, Warriors: Navajo Code Talkers, was published. Over the past thirty years, it’s been reprinted twenty times.

Although he finally purchased a digital camera last year for freelance work, Kawano prefers shooting black-and-white film because it keeps his focus on light and composition. All of the photographs featured in this story are silver gelatin prints.

“When you take a portrait, you look at the face,” Kawano said. “It’s a really unique part of humans and they always change—especially the eyes. The eyes tell you what they feel.”

Kawano started shooting portraits for his Warriors series in 1975 and finished in 1989, before his book was published. Years later, between 2002 and 2007, Kawano put together a Warriors II series. By then, many of the nearly 400 Code Talkers had died, and he recognized the urgency in capturing their stories. The two Warriors series, like all of his other photos of the Navajos, are more than simple portraits—they are photo essays. Each photo tells its own story, but collectively, the photos reveal rich culture, history, and humanity.

“I wanted to show who they are,” Kawano said. “One guy was a sheep herder, so I took a photo with sheep in the background. Sheep are the Navajo people’s life; they butcher sheep and they use the hair for weaving. Sheep are very important for their life.”

For each portrait he shot, Kawano gave the Code Talker a form asking them to share one story from the war. Some did not want to respond, and their photos in the book simply bear their name, clan name, and the battles they fought. Others shared harrowing stories of being shot at or captured by their own troops because other Marines mistook them for being Japanese. Some recounted humorous stories about encountering sand crabs and bullfrogs in their fox holes.

In his portrait, Wilson Keedah Senior holds a worn photo of himself as a Marine. He wears a plaid shirt and is seated in his dark living room. His memories hang heavily on his face. “I went to war because there were no jobs on the reservation,” the caption reads. Another man, David E. Patterson, is also seated indoors. The room is light and he gazes upwards, away from the camera, through thick eyeglasses. A small crucifix hangs on the wall behind him. The caption beneath his portrait reads:

“When I was inducted into the service, one of the commitments I made was that I was willing to die for my country—the U.S., the Navajo Nation, and my family. My language was my weapon.”

Crosses appear in many of the Warriors portraits, along with quotes crediting Navajo traditional beliefs with protection during the war, or healing afterwards. American flags and statues commemorating the war also appear in the background of many photos. In others, there are hogans, sheep, basketball hoops, and a vast landscape and sky unrolling towards a distant horizon. Most of the Code Talkers look directly at the camera, but some look to the sky.

Kawano has now lived on the Navajo Nation for over forty years, and he says photographers like Eugene Smith, Henri Cartier Bresson, and Robert Frank have provided inspiration for his own photo essays. His photos are intimate and emotional, and even the heaviest expressions reveal a humanity that draws the viewer in. Unlike visiting photojournalists who take in the Navajo Nation for the first time, Kawano admits he sometimes puts off taking photos because he thinks he’ll have another opportunity. Still, he wouldn’t trade fresh eyes for the intimacy of really knowing a place and culture.

“If I can visit their home, I like to spend all day taking pictures,” Kawano said. “I don’t want to be a stranger taking a picture. I like to be part of their life and take pictures of their everyday lives.”

At 71, Kawano’s hands move like a music conductor as he speaks. He is wiry and lively and his warm smile invites connection and conversation. Kawano estimates that he met 130 Code Talkers, but now there are only four living. The oldest is 102 years old. Kawano has continued to take their portraits when he is able, and he hopes to publish another book to encompass the breadth of the portraits he’s shot over the four decades he’s lived on the Navajo Nation.  In the last photo of his Warriors II series, taken in 2007, Kawano stands in the middle of a paved road in Winslow, Arizona, shoulder-to-shoulder with Alfred Peaches. Peaches wears his Garrison cap and holds a framed photo of himself as a young Code Talker. Kawano’s camera bag is slung over his shoulder. With steady gazes, they face the camera together, holding onto memories and language for future generations.

Emily Withnall was born and raised in New Mexico, and now works as a freelance writer and editor in Missoula, Montana. Her work can be read at emilywithnall.com.

Editor’s Note: An earlier version of this story misidentified Carl Gorman. He is R.C. Gorman’s father, not his son.