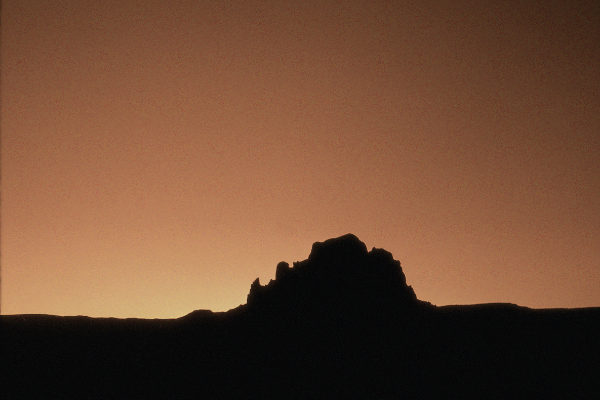 A dry climate with warm days and cold nights. Harsh spring winds. A landscape informed by long-ago volcanic eruptions. These are a few of the characteristics that describe New Mexico. They also describe Mars, and the connection between the terrains has informed Dr. Larry Crumpler’s work as a geologist for many decades.

In November, Crumpler, the New Mexico Museum of Natural History and Science’s research curator of volcanology and space sciences, was named one of only a handful of scientists selected by NASA as part of the science team for the Mars 2020 Perseverance rover mission, the objective of which is to better understand the geology of the planet and look for signs of ancient life.

Crumpler’s interest in other planets dates to childhood, when he observed the night skies with his small refracting telescope and conducted solar astronomy in the summer. “At that time, Mars was just this red globe with all these strange streaky blotches, and it was a very mysterious place,” he says. When the U.S. conducted its Mariner 4 mission to Mars in July 1965, Crumpler was a child “literally sitting by the radio waiting to hear what they’d found.” In those days, he notes, “there was no media coverage really to speak of until it came out in the paper a day or two later and there were these pictures of the surface.”

When Crumpler went to college at North Carolina State, he knew he wanted to study the “surfaces of planets,” but “at that time, in the seventies, it wasn’t clear what you went into to do that. It was a totally new field.” He started out in physics, but it didn’t fill his need “to talk about the planets.” Rather, “basically you got a math degree before you did any physics,” he says.

Geology seemed like a better fit, he says, “because they studied rocks and surfaces and landscapes.” Indeed, it was. “I discovered how exciting that was, and essentially got interested in geology and almost lost track of planetary interests until the early seventies.”

When he finished his bachelor’s degree, he knew he wanted to conduct “real geology in the field,” and New Mexico seemed like the place to do it. The landscape immediately resonated for him. “It looked like all those 1950s science fiction movies of another planet. They’re always dry and arid and red.”

Crumpler earned a master’s degree in geology from the University of New Mexico and his doctoral degree in planetary science and geophysics at the University of Arizona. But coming to New Mexico solidified what would become a personal and professional twinned interest in the state’s landscape and its connection to his early fascination with far-away planets.

“New Mexico has so many volcanoes,” Crumpler says. “And when I came here for grad school, it became pretty obvious that volcanoes were something in New Mexico that you couldn’t find in very many other places. They’re so well preserved, it’s almost like standing on them the day after they erupted. You can see all the evidence. I really got fascinated with them because of that, but also at the same time… we had just started visiting the moon and the first few flybys of Mars, and we started getting the sense that volcanism—lava f lows and volcanoes—were a very important part of the landscape there. There was that dual interest in what was going on, and they supported each other.”

His passion for New Mexico’s landscape remains undiminished from those early days, with a particular commitment to educating the public—through lectures, articles, and other types of outreach—about the state’s volcanic features.

“You’re not living just anywhere,” he says. “You’re living in a very special place, and it’s part of the appreciation of where you are. I think if you’re in New Mexico and you don’t know any geology, it would be like living in a library and not being able to read.”

At the same time, Crumpler has applied his intimate knowledge of conducting field geology here to helping NASA study Mars, including fifteen years working on the Spirit and Opportunity missions.

He has a forthcoming book, in fact, that explores fifty years of exploration of Mars. “I’ve been involved since the mid-seventies when I was a graduate student intern on the Viking mission, so I’ve seen the whole progression of development of the Mars sciences. When I started, we really knew nothing about Mars— it was just this red planet with strange markings. And then we started sending spacecraft there and started learning that those markings had nothing to do with what Mars really was. So, it’s been a long history.”

Despite his extensive knowledge and experience, after he submitted his proposal last March, Crumpler did not take for granted he would be accepted, given that he was up against steep competition. Only thirteen scientists would be chosen for the team operating the Perseverance rover when it landed on Feb. 18, 2021. In late 2020, he was finishing up his manuscript—which will include many photographs, he says—the same week he learned he had been chosen for the newest mission.

“I assumed, because we had shown through the Spirit and Opportunity missions how fun and interesting rover missions were, that the competition would be outrageous,” he says. While the competition was indeed robust, Crumpler’s proposal brought a unique perspective and scope: In a nutshell, he’ll be conducting the type of field geology he’s done so much of in New Mexico on Mars.

“I was always half field geologist and half planetary geologist, so I sort of transferred my love of mapping field geology to Mars. And since Mars is like New Mexico—just more so—it was an easy transition.”

The constraints of conducting field research on the rover changes the process and adds new technology to the undertaking. On Earth, “when you’re walking along, you look at an outcrop and determine where the rock is and what you knew about the rocks in the region, and then trace out how far you can see it to either side of your little traverse,” Crumpler explains. “And you do this all day long and, in the case on Earth, you’re able to walk off to the side and visit outcrops beyond what you’re able to see, and so you end up mapping the area.” In the rover, on the other hand, “you’re constrained along the path. So it ends up being this long noodle, maybe 100 meters wide on either side of the rover, that you’ve mapped in this way.” But on the rover, Crumpler will have other tools, such as the SuperCam instrument developed at Los Alamos National Laboratory, described by the lab as a kind of rock-zapping laser that will allow scientists to study rocks that might otherwise be out of reach.

“It’s a complicated process” Crumpler says. “The mission will cache samples on its traverse, and there’s a great desire on the mission to document where the samples come from and what their context is.”

The technology on the mission improves the efficacy of the process, he says, but the outcome is “basically the same: You end up drawing the lines on the map.”

Crumpler will also help NASA evaluate the use of the new helicopter, Ingenuity, for geologic research along the rover’s traverse at the Jezero Crater landing site, having been one of the team members who worked on the proposed Mars helicopter, Scout, in 2014.

“It’s really just kind of a test,” he says. “It’s probably only going to last about thirty days, so it will be an interesting experiment. But it will be exciting when it does fly.”

Crumpler’s enthusiasm for applying his technical expertise amounts to developing a “new way of doing science and geology on Mars,” one in which the field geology perspective may yield key knowledge about the planet’s history. But the also brings a poetic and philosophical awareness to his upcoming adventure.

“So much of trying to understand the geology through the landscape that is so important to places like New Mexico, and I think important to places like Mars, is it gives you a deeper understanding of where those landscapes come from, what their significance is, what’s unique about them. Rather than just being pretty pictures—what’s behind that story?”

More than fifty years ago, Crumpler listened as Mariner 4 made the first successful flyby of Mars and captured the first photographs of its surface. Now, he too will be making history. “It’s been centuries since a small group of people stood on the edge of a new world and took steps to understand it,” he says.

“That’s an exciting process to be involved in.”
—

Julia Goldberg is a journalist and teacher in Santa Fe, New Mexico, as well as the author of Inside Story: Everyone’s Guide to Reporting and Writing Creative Nonfiction.