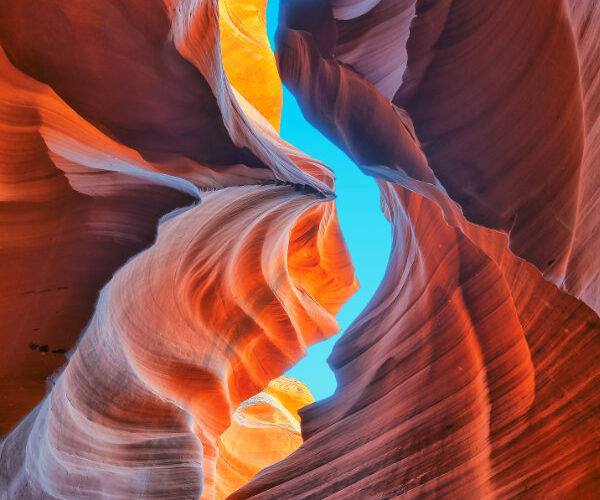 Antelope Canyon is a slot canyon in the American Southwest. It is located on Navajo land east of Page, Arizona.

Scott Wiggerman is the author of three books of poetry, most recently Leaf and Beak: Sonnets, and an editor of several volumes, including 22 Poems and a Prayer for El Paso, winner of a New Mexico-Arizona Book Award in 2020.

“Reveries While Walking the Mesa on the Hottest Day of the Year” was a Laureates’ Choice Winner in the 2020 Maria W. Faust Sonnet contest.

Lost in the Sonora, Sunset of the Fourth Day

golden shovel on a haiku by Ann Howells

Along the moonlit arroyo, cactus
spines, the bristle of edges, a screech-owl
calling from juniper shadow. Day retreats,
sky a bruise deep
cold, into dream, the sleep of saguaro
prickling at wakefulness. A nest
of lizard eggshells, a lacing of snow.
the wind with grit, the

golden shovel on a haiku by Lesley Anne Swanson

Chamisa brushes his shins, tufts
light as breath, these puffs of
forgetfulness—rabbitbrush—
its dust of blooms. And the coyote
frozen mid-step beyond: she waits,
she does not falter, beside
her a rabbit, unstrung, at his drooping ear a
glint, a flint-struck fragment, no shaft
to send it humming, no blood of
prey, no fire, no song. Only this. And moonlight.

A Step Beyond Silence

The rattlesnake dozes in trailside dust—
sinuous diamond-backed mosaic coalescing
from the pattern of fallen leaves like a lizard
materializing out of sunshine and stone.

The trail is wide enough for snake and
hiker, though as I cross the point
where an invisible strike line bisects
the path I am so carefully inscribing, where fangs

would connect with blood and bone,
the part of my brain that can think must
face down the part that whispers Run!

When I return, the rattler curls unmoved
among the leaves and dust. Again I trace
a path just out of reach if he should wake

and strike. Again my ankles feel the current,
a knowledge older than the people
who tended squash and beans along this creek,

who left with just the caves they deepened
in this porous desert rock, the stonework
walls of their houses, their markings
on the canyon walls to tell us of their passing.

spiraling from a shaggy, shedding
cedar post, a rattler curling
in the dust, vigilant even in sleep.

Aquí se abre. Hunger draws him,
in the distance a new life: el espejismo.
Beyond this fence, another, another—

One morning, a creek bed, cool and dry
and live-oak shaded. Another fence, a field.
Beyond the field, a gate, a yard, a bed: geraniums

red as the first fresh drops of blood.
A walkway strewn with pebbles. Foot scraper
and steps, weathered boards. A shaded porch:

her husband in the field, she says, distant
murmur of a tractor where she points, dust
pluming there. Seedlings, rain, harvest—

these are hopes he knows too well. Her eyes,
though. What we have is ours, her eyes say.
Fence posts, barbed wire that marked his way,

the river he swam. She wants him
on the other side. You have no place here,
her eyes say. Move along. But he will stay.

Trabajo, he says—a word, a need
she clearly understands. The fields will take
what he can offer. Aquí se abre.
—

David Meischen is the author of Anyone’s Son, winner of the John A. Robertson Award for Best First Book of Poetry from the Texas Institute of Letters. A lifelong storyteller, Meischen has twice received the Kay Cattarulla Award for Best Short Story, also from the Texas Institute of Letters. Co-founder and managing editor of Dos Gatos Press, Meischen lives in Albuquerque with his husband—also his co-publisher and co-editor—Scott Wiggerman.

“Lost in the Sonora, Sunset of the Fourth Day” was previously published in the San Pedro River Review.